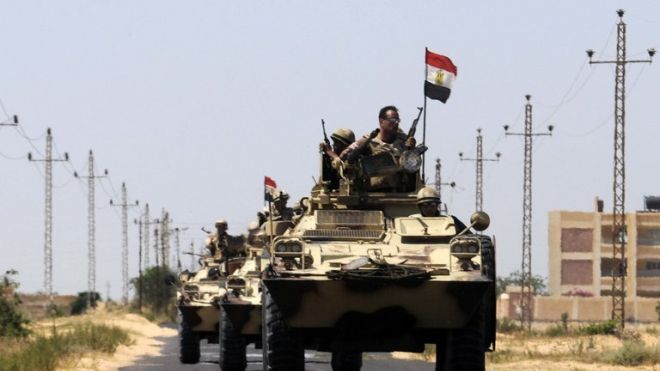 At least 10 fighters have been killed in a military operation on hideouts in North Sinai, reported state-owned MENA.

According to MENA, security sources reported that Egyptian forces targeted militant hideouts south of Sheikh Zuweid and Al-Arish; areas that have been a key battleground for the army in the fight against militant Islamist groups.

Security sources reported that a vehicle was destroyed in the raids, suspected to be used by militants in launching attacks.

The raids are the latest attacks in the near-daily conflicts between militants in the region and the security forces.

The largest assault on security forces from militant groups occurred on 24 October this year, when a suicide truck bomber targeted a military checkpoint, followed by insurgent raids in the area. At least 30 security personnel were killed. The attacks were later claimed by the region’s largest militant group Ansar Beit Al-Maqdis. The group recently changed rebranded themselves to ‘State of Sinai’ following a declaration of allegiance to Islamic State.

Following the attacks, President Abdel-Fattah Al-Sisi announced a three-month state of emergency in the region and the creation of a ‘buffer-zone’ along the border between North Sinai and Gaza. The armed forces have so far evacuated around 1,156 families from the area and demolished hundreds of homes in an attempt to quash the illegal tunnel trade between the two regions.

After the discovery of an 800m tunnel, the military announced that they would expand the original 500m depth of the buffer zone to 1 km.

Egyptian authorities believe that the tunnels are a key avenue for the supply of fighters and arms into North Sinai.

On Tuesday, President Sisi announced the reduction of the curfew imposed on parts of North Sinai from 14 to 11 hours, in order “to help people in Sinai earn a living”.