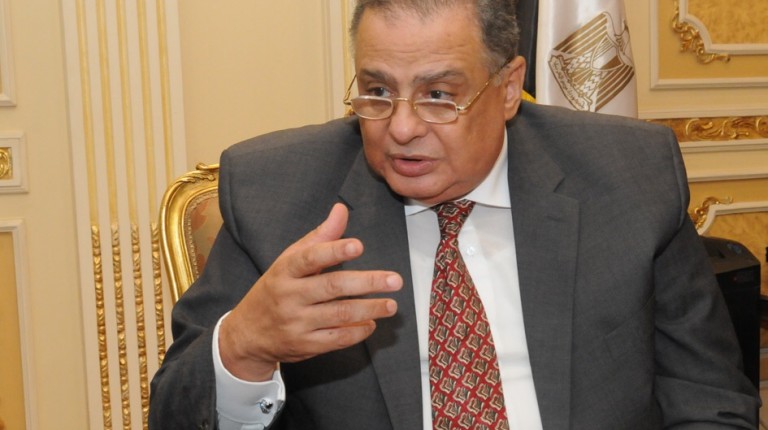 Trying Mubarak and his regime through popular political trials cannot take place under a constitutional state, and should have taken place during the revolution before the constitution and new president were voted in, said Ibrahim El-Heneidi, Minister of Transitional Justice and head of the electoral constituencies committee as well as the legislative reform committee.

Regarding the state of Egyptian prisons, the minister said that during his visit to the Tora Prison complex, he did not witness any violations of prison regulations and that the detainees did not complain of anything other than a scarcity of exercise and visiting hours.

Let’s begin by talking about your last visit to Tora prison complex. What was the reason behind the visit?

During the Human Rights Council’s Universal Periodic Review (UPR), several countries asked about the status of Egyptian prisons and claimed that the detainees were ill-treated and subjected to torture, even though Egyptian and international organisations confirmed the absence of torture. Based on this, I decided to make this visit and to have some council members accompany me. This visit is considered the first of the committee’s work as no one has undertaken this procedure before, and the visit coincided with the occasion of Human Rights Day.

Did the committee, under your leadership, record any complaints during the visit?

The committee did not find anything that was contrary to prison regulations during the visit, and there were no complaints from detainees regarding torture or ill-treatment. We examined every location inside the prison, whether it be the detention areas, the mosque, the hospital, the pharmacy, the bathrooms, and the workshops, and we not only observed the conditions of prisoners from the outside, but we also went inside to check on their conditions, and we found the situation to be normal. The bathrooms were clean and the pharmacy was equipped with all types of drugs. During our conversations with some of the prisoners, they did not complain of anything other than a scarcity of exercise and visiting hours.

Will there be other visits or will the committee be satisfied with just this visit?

Of course there will be other visits. We think it is important to have field visits.

Why did the committee not have representatives of civil society organisations accompany you?

I wanted this to happen but there was little time and we were unable to invite them, but we will be in contact with them in the future. We did invite members of the National Council for Human Rights and they promised to study the matter, but did not attend.

Will the work of the committee, which is charged with following-up on reviewing international human rights mechanisms, end upon completing the report to respond to the recommendations from Geneva?

Once the committee submits its response to the recommendations, then its work is complete. However, because of its importance, I hope that we can find a suitable mechanism to continue this organisation and have it be responsible for reviewing international human rights mechanisms that require an accumulation of experiences and concerted efforts regularly.

Will you address the President so that committee’s formation is permanent?

I will address Prime Minister Ibrahim Mehleb with the issue so that he can send it to the President or issue a decision through the cabinet. It does not make sense to bring together a committee that, when its work is completed, its members return to their main positions, and then after four years it is formed once again from scratch.

Will transforming the committee from a temporary to a permanent body contribute to the preparation of reports on the state of human rights in Egypt, and therefore fewer comments from the United Nations Human Rights Council?

The committee members working on a permanent basis will enable follow-up on issues that they are working on consistently, and they will have the capacity for continuous field work follow-up on the human rights situation in Egypt. This will prove useful for preparing a comprehensive periodic review, which the Egyptian government will present to the Human Rights Council UPR, eventually helping create an archive on the state of human rights.

Would you be interested in creating an ongoing collaboration between the members of the commission and civil society organisations?

This is necessary and I talked about this with civil society organisations, and during my last meeting with the National Council for Human Rights, held in the presence of representatives of Egyptian and international human rights organisations, I told them there has to be a method for coordinating work and communication, and instructed them to choose a mechanism in cooperation with the committee or the ministry. They welcomed the idea so they cannot claim that we do not take collaborating with them seriously.

The electoral constituencies committee finished preparing a draft law in order to conduct parliamentary elections. Is the delay in issuing the law due to political intrigues?

This is not true, especially since President Abdel Fattah Al-Sisi stressed the need for the parliamentary elections to be held at the earliest possible opportunity, so the claim there was political filibuster or a lack of harmony is inaccurate. We are a government committee with a main goal of issuing a law free of defects which does not conflict with the constitution.

This is not true. The law is very important because the upcoming elections for the House of Representatives will be based on it, so it was formulated with a great deal of prudence and caution.

The relative weight per seat must be specified and this entails looking closely at the number of both the population and electorate, making sure of the sources, and reaffirming the results more than once. If the numbers are compatible in a certain way, then the constituency is correct, and if not, we do the study once more.

As for border governorates, the Parliamentary law and the constitution take these areas into account, even if there’s not enough relative pull for seats. This means that the committee had no political biases while preparing the law.

I doubt that this ever happened, as the committee members have a conscience, and not a single constituency was not compliant with the equation. As head of the committee, and as a judge, I want a law that nobody objects to; however, I expect there will be objections, especially when expanding or decreasing the number of seats per constituency.

Some political forces have demanded a law set by the President. What do you think about this?

A law set by a sovereign decision is a huge mistake. It’s as though we are overtly saying that we are a lawless state where the president usurps power. This would be a lie, as the law for dividing electoral constituencies has gone through all legislative stages undergone by any normal law.

There were a number of conflicting figures and statistics from different agencies, which lead to different equations for distributing the seats within each governorate, and so we demanded that those agencies review all their data, which took quite a bit of time.

We depended on several agencies for information, like the Central Agency for Public Mobilization and Statistics for the population calculations, and the Supreme Electoral Commission for voters’ data. We used information from other agencies to ensure the integrity of data we received. We also utilised the Ministry of Planning and the Civil Registry to get data for Egyptians living abroad. All this information was subject to various equations and presented to specialised committee members and consultants. In many cases, we gave each member numbers and requested results for numbers to be applied, and then reviewed them.

Do you mean that the committee has been working outside of normal meetings times?

The committee worked non-stop for 45 consecutive days. Right before the draft law came out, we worked 24/7 and reviewed numbers using modern means.

Did the governorate sectors preparing seat lists take more time than that of individual seats?

The individual constituency system took a longer time to develop. The committee made sure that each list would reflect the relative strength of each governorate.

Some parties objected to not putting the law up to societal discussion before sending it to the cabinet. What is your opinion on this?

We have listened to so many opinions. During the first committee meeting, we requested that parties send their suggestions for nearly a month. If the committee opened doors to direct discussion, we wouldn’t have been able to pass the law, especially since each party or political entity had its own suggestion.

Did the committee receive many suggestions from political forces and parties?

Many political forces and parties sent their suggestions, and individuals sent suggestions as well.

Did Islamists send suggestions to the committee?

No, they did not.

Why did the committee reject the suggestion of some political forces to allocate a single seat in each constituency to the individual system?

The committee never rejected this. It is a good idea but application would require changing several things, most importantly voter data and administrative divisions between governorates. Applying this suggestion would take from six months to a year, and we don’t have the time for that.

Can we apply this suggestion to the next parliamentary elections?

Yes, we can. Especially since many countries around the world find this system to be useful, and apply it.

What were some of the rejections you received while proposing the constituency law to the cabinet?

Some ministers asked about the demarcation of governorates, and I advised that no new demarcations be made before Parliamentary elections in order to avoid suspicions of unconstitutionality.

Do you think Islamists will have a place in the coming parliament?

Some forces may try to include some names to their lists to ensure success in voting blocks in some areas, but in my personal opinion, Islamists lost their strength in the political arena, especially with the ongoing terrorist acts.

Do you expect the Muslim Brotherhood to return to Parliament?

No, the people no longer accept or trust them.

What about the Salafis?

The public mood in Egypt is no longer pro-Islamism.

The constitution made it compulsory to establish the National Electoral Commission to oversee the upcoming parliamentary elections. Is the Ministry of Transitional Justice preparing the draft law now or is it waiting for Parliament?

Yes, the Ministry of Justice is preparing the law, but it will be applied for the following parliamentary elections, and the current Supreme Electoral Commission will be charged with conducting the upcoming elections.

The Ministry announced that there are some adjustments being made to the protest law. Why weren’t they discussed until now?

Some agencies have requested some adjustments, and we received a number of proposals from the National Council for Human Rights that were considered and sent to the cabinet.

Has the Prime Ministry sent a response to these adjustments?

A committee was formed to prepare a draft law for the construction and renovation of churches. Why does the committee refuse to reveal information about this?

This law is one of the drafts that the three churches are concerned with. We asked them about their points of view and they gave us directions in this regard, which we have proposed to the rest of the churches. The time is not right for a societal discussion, although this is not taking place in secrecy, because once we receive the churches’ responses, there will be clear information proposed regarding the project.