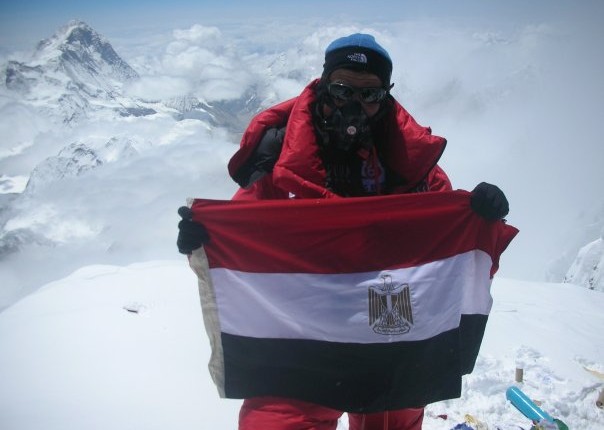 Omar Samra, from a distance appears ordinary. Bulking muscles do not sit on top of his frame – an appearance far from that of a mighty Herculean athlete. Samra is tall and wiry, yet up close, his physical prowess leaves an impression. Probably because he has done what so few have ever accomplished, and perhaps it’s because of his contagious determination to be great.

Before sitting down to talk with Daily News Egypt, Samra takes a quick bite from a banana, a behest from one of his aides who comments: “You need to eat, you’re getting so thin” to which Samra replies “It’s okay, I’m a lot stronger than I look”. This remark from Samra no one will deny. This is not to say he is arrogant, a trait he says “completely turns him off”.

As the first Egyptian, and the youngest Arab to ever reach the summit of the highest mountains in the world, and the only Arab to qualify for an opportunity to travel to Space, Samra now sets his sights on another challenge.

Partnering with Commercial International Bank (CIB), Samra announced on Thursday his latest quest – to a take on the “Adventures Grand Slam”; challenge that has only ever been achieved by 35 people in history. He will head to Antarctica this week to begin his expedition.

The “Adventurers Grand Slam” is a feat that requires one to climb the seven highest points on all seven continents, as well as ski to the North and South Poles. Samra has already climbed the seven summits, the only requirement left is to ski the Poles.

Samra’s first destination will be to Antarctica, where he will ski to the South Pole. At the press conference Samra said he “never skied in [his] life” and that his first “skiing trip was last weekend in Zermatt, Switzerland”. According to Samra, he was able to “pick up sufficient skills…however, skiing Antarctica is different as it will be cross-country skiing where one walks on flat uphill terrain…it’s more about stamina and strength and less about technique like downhill” skiing.

Samra will start his trip by flying to Punta Arenas a town in the South of Chile. There he will board on a special Russian plane called the Illyusion, the only plane that is possible of landing on an ice runway. Once he arrives to Antarctica he will camp at Union Glacier, a camp set-up for explorers and scientists. From there, Samra says “we will board on propeller plane, not a jet one, that will take us to the 89th degree”. From there, it’s a 120km trek to the 90th degree where he will know he’s reached the Pole.

Trekking in extreme conditions Samra will ski an average of eight to ten hours, dragging sleds that weigh up 80kgs for about two weeks. It’s important to keep in mind that Antarctica is the coldest, driest, windiest and highest continent on earth, with temperatures reaching -70C.

For such a long trek the one might want to know what kind of music Samra plans to listen to. When asked he says “I actually don’t listen to music when I’m climbing. I find it important to be aware of my surroundings.” He’ll listen to some rap and alternative tunes when he’s unwinding in his tent, but when trekking he prefers “to fight through the negative thoughts not just drown them out with music”.

When compared to the multi-billionaire or successful football star, Samra was asked why these pursuits, in particular, are so inspirational to the youth of Egypt – he says “that my story is non-traditional”.

He continues to say that  “when you grow up in Egypt you’re told to study, go to school, get into a well ranked university and get a job as a doctor or some other professional – it’s this road that is already planned, in the US they call it “the American dream”.

Samra goes on to say that in Egypt “you’re suppose to get married, get the apartment, then the kids – it’s a course that can be followed blindly and it can make you feel enslaved. When you can achieve some kind of success in your own way it gives hope.”

Samra talks passionately about one’s course in life and says: “When it’s predictable, where is the magic, the uncertainty? Where will [the youth] find happiness? It’s from this uncertainty that one is able to learn. Young people see what I’ve done and can say ‘he can do it’, so they won’t feel like first one that is seeking that different path”.

Samra, who was born in England and holds dual-citizenship, admits that he is quite lucky. When pressed to answer his Egyptian critics who say “he’s only able to accomplish such goals because of his nationalities”, Samra answers that “yes being a dual citizen has allowed me to obtain certain visas that have made it possible for me to travel to certain countries to being to hike”.

Instead of what they are unable to accomplish, Samar goes on to say people should “devote more energy into thinking how to achieve what they want, and focus and work hard, yes you need a bit of luck, like in my case, but when one is willing to give everything they have [they’ll] get it.”

Samra adds that “the person just has to ask themselves how much effort they are willing to make for a goal, it might take more time for some but it’s not impossible”.

For anyone who has ever watched Samra on his adventures one thing is undeniable; he carries Egypt on his back, both figuratively, and quite literally in the form of the Egyptian flag.

Why Samra seems to be so patriotic is a question he starts to answer be saying: “I dislike the word patriotic, it makes it seem as though we are all different and value our own country more than another.”

Samra adds: “I have an immense love for my country, I have so many memories here, my family is from here. I feel that I care a lot about the people of this country, if I can do something for the betterment of them I will”.

He does make it clear though that there also exists “a personal commitment” to one’s pursuits. However, “you can’t isolate the personal from where you come from”. Samra goes on to stress that “the value shouldn’t just be for one’s self, or country, but more importantly it should be undertaken for humanity”.

Successful self-made people often throw around words such as “inspiration” “motivation” “passion” “dedication”. If Samra can use one word to describe himself he picks “progressive”. He elaborates by saying: “To be forward. In life, when things are going great, it’s easy to see what’s in front of you and it helps you to keep going, but when things get difficult it’s important to just keep going”.