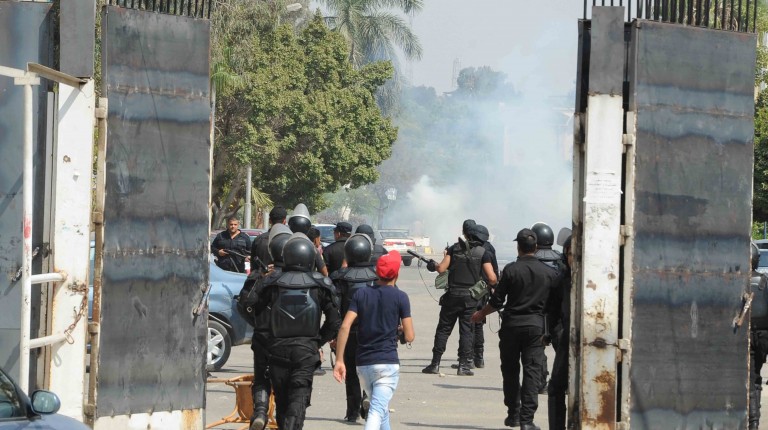 Al-Azhar University expelled 71 students Wednesday for allegedly participating in protests and “rioting on campus”, according to the University’s media centre.

The University added in statement that the decision was taken after the investigations revealed that the suspected students partook in “acts of violence”. The statement added that the expelled students will be called upon by the army to perform their mandatory military service.

“The university calls upon all students to maintain order,” the statement said.

Students Against the Coup (SAC) confirmed the expulsions and said that the group will retaliate. “The decisions taken by the coup-supporting university president will spark the anger of students,” the group said.

In November, at least 23 students were expelled from Al-Azhar University for their alleged implication in acts of on-campus violence.

SAC has been staging demonstrations since the start of semester to protest the arrest of fellow students and the presence of police forces outside campus.

Since the start of the academic year on 11 October, over 300 students have been arrested, according to the Association for Freedom of Thought and Expression (AFTE).

In a related development, Minister of Interior Mohamed Ibrahim announced on Tuesday that detained students will be allowed to take their midyear exams in prison. The minister added that the prisons affairs department will coordinate with the universities to hold special examination halls.

The decision comes after several rights group and revolutionary movements called upon the Minister of Higher Education to allow students to take their exams, initiating campaigns to pressure the authorities.

The Egyptian Commission for Rights and Freedoms has been organising volunteer campaigns where activists collect a database of detained students, to present it to the public prosecution.

The Revolutionary Socialists movement organised a campaign since the beginning of the semester to condemn the “security forces’ violations” and to demand that arrested students be examined. The campaign, called “Free the Students”, said that “although our main goal is to free all detained students, we fear that they might be expelled for not attending their exams”.

The campaign collected signatures from professors and students to present the Minister of Higher Education.

Riot police has been present outside a number of universities in anticipation of demonstrations since the beginning of the academic year.

On 14 October, an Alexandria University student Omar Al-Sharif died from birdshots fired by the police during clashes between students and riot police, sparking a wave of condemnation.

Following the ouster of former president Mohamed Morsi in July 2013, student protests have been widespread nationwide, often resulting in clashes and violence between the students and security forces.