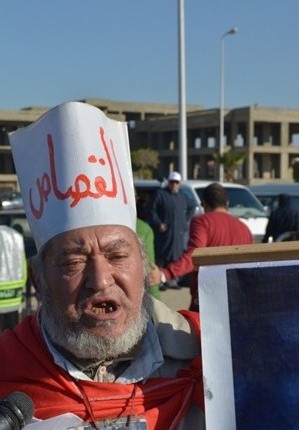 Egyptians organised 714 demonstrations across the country in November, according to a monthly report by Democracy Index (DI), a tracing tool of the International Development Center (IDC).

The report, published on Tuesday said that the number of protests averaged out at 24 per day.

“It is not the numbers that are alarming, but rather the nature of the demonstrations, that show that there has been an increase in the types of problems combined with a lack of government resolution,” IDC’s Executive Director Mohamed Adel told Daily News Egypt Wednesday.

Adel warned of the consequences of reaching an ‘extremely heated situation’ by 25 January, the fourth anniversary of the 2011 revolution that removed former President Hosni Mubarak from power. He added that tensions are especially high in light of the Cairo Criminal Court’s decision to drop charges against Mubarak for the killing of protesters during the 18 day revolution. It is a decision that came as a disappointment to political activists and opposition groups.

The state’s security plan in response to the Salafi Front’s call for an “uprising” on 28 November depended heavily on warning people against participation, Adel said. He added that protest prevention was also due to the deployment of forces to deal with protesters.

The Ministry of Interior aimed to signal that it has the power to force an entire population to stay at home on one day, according to Adel, and many citizens did fear going out on 28 November.

“Security authorities share an important responsibility in how events develop before and during protests with threatening statements to citizens,” Adel added.

The DI report traced the release of political detainees, the end of restrictions on freedom of speech and the end of the protest law, as part of demands for reform.

Three major events caused protests to erupt in November: the commemoration of the Mohamed Mahmoud clashes on 19November; the “Islamic revolution” on the 28 November; and finally the acquittal verdict of Hosni Mubarak, his sons and aides on the 29November.

DI said the Islamist protests significantly contributed to the increase in protest numbers for this month in comparison to October which witnessed a total number of 643 protests. On 28 November alone, DI said it traced a total of 91 demonstrations across Egypt, divided between 75 protests called for by the Salafi Front along with the Muslim Brotherhood and affiliated groups. On the other hand, 15 other protests were organised by citizens to support the current regime’s police and military.

Despite official announcements the authorities had the restive situations in Egyptian universities under control, the report said 226 protests in November were students’ protests. The same number was provided for the Muslim Brotherhood, which works and supports the majority of student protests organised by Student Against the Coup (SAC) movement. Thus, students and the Brotherhood equally contributed to 63% of November’s protests.

On several occasions, the Egyptian media spoke of the “elimination of students’ protests”, and several articles featured in state-run media throughout November were entitled “calmness in universities”. This occurred up to several days before the end of the month’s events, as security had intensified before 28 and 29 November, and universities had declared those holidays for students.

On a further note, November protests included 111 demonstrations related to labour issues, 31 protests for political and rights’ activists. Greater Cairo and Alexandria came on top of the list of governorates with 250 and 87 protests respectively.

Adel said “it was hard to trace every single detail of the incidents”, because field researchers cannot closely follow up on all events, in addition to avoiding being at risk of violence.

“Usually, what adds to the violence during protests is the role played by some residents in arresting and delivering participants in the protests, which often results in clashes,” Adel said. He criticised the fact that such practices are allowed by authorities who should be doing the job.

DI has been working on reports accounting for the ongoing protests in the past few years, including categorical demonstrations such as students’ or workers’ strike.

“Our data collection relies on four different pillars which include a team of 18 field monitors,” Adel said to Daily News Egypt earlier in November. He added that they also rely on local and international news sources in the process of information gathering. They then consult with legal experts on the reported incidents to determine violations according to international human rights standards, which makes their error margin less than 5%.