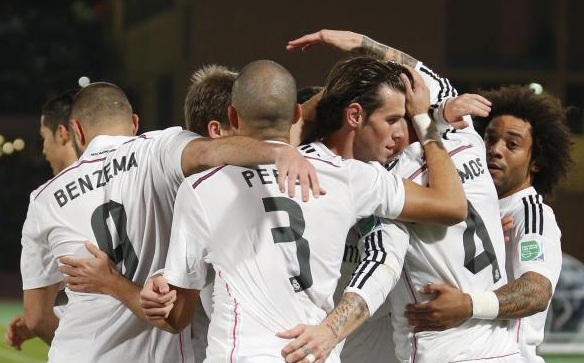 Real Madrid qualified for the FIFA Club World Cup final round, which began on 10 December in Morocco, after winning against Mexican team Cruz Azul. They won with 4 goals to 0 in the semi-finals, in a game played in Marrakech.

Real Madrid dominated the game and played very smoothly, with Ramos scored a goal in the 15th minute, Benzema in the 36th minute, Gareth Bale in the 50th minute, and Isco in the 72nd minute. Mexican Torrado missed a penalty kick in the 40th minute, which was saved by Real Madrid goalkeeper, Iker Casillas. It was the second save from a penalty kick this week, after Casillas stopped the penalty kick ball in the Primera Liga game against Almeria.

Real Madrid carried on scoring points for this season by reaching its 21st consecutive win through several competitions. They are steadily approaching the record of Brazilian club Coritiba with 24 wins.

Real Madrid maintained its goal tally in 2014 following the 4 goals scored against the Mexican team, to reach 176 goals, breaking the Spanish clubs’ records in one year, which was Barcelona’s score of 175 goals in 2012.

Real Madrid’s figures are still expected to increase because the team it is still waiting to play in this year’s FIFA World Cup final on Saturday.

The FIFA World Cup tournament launched its first round with Morocco’s Tetouan against New Zealand’s Auckland City Oceania champion, in which the team won against the Moroccan Aqaba in the penalty shoot-outs by 4 goals to 3, after the two teams scored equal points in the original game and at halftime the additional time .

Then Auckland managed to kick African champion ES Setif out of the tournament early, after winning with 1 clean goal in one of the two games of the second round. They qualified to play against Argentina’s San Lorenzo, South America’s champion in the semi-final. The game will be held on Wednesday, with the winner set to play against Real Madrid on 20 December in the Championship final.

Mexico’s Cruz Azul won the game against Australia’s Western Sydney, Asia’s champion, by 3 goals to 1, and the losing team will wait for the game to be played in order to know the 3rd place winner on Saturday. Asia and Africa’s champions played on Wednesday to select the winner of the 5th place in the championship.

This is the first time that Arab teams have not participated in the semi-finals of the championship, whether from Africa or Asia, for three years. Moroccan team Al-Ragaa, the hosting team, won 2nd place in the previous championship in 2013 and took the silver medal, while Egypt’s Al-Ahly took 4th place for the CAF Championship in 2012, following Qatar’s Al-Sadd team winning the bronze medal in 2011. This is the first time for the Oceania team to make it to the semi-finals in the FIFA World Cup.