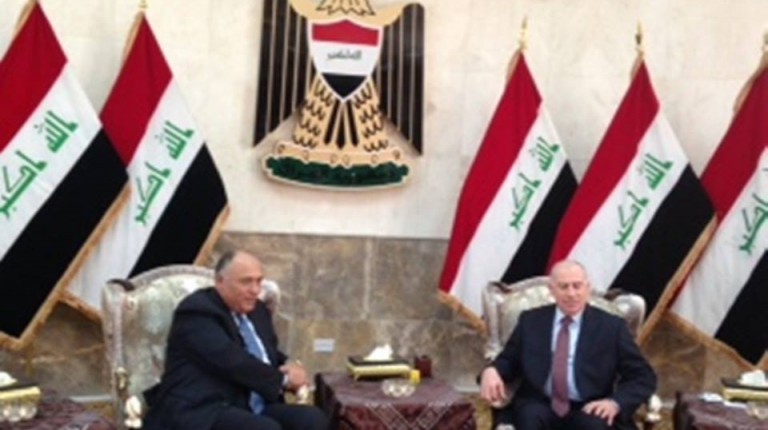 Shoukry is set to meet with other top Iraqi officials to discuss stability in Iraq.

According to a statement by the Egyptian Foreign Ministry, Al-Nujayfi asserted “his full appreciation” of the Egyptian support for Iraq and its unity. He also expressed appreciation towards Egypt’s “assistance in Iraq’s fight against terrorism”.

“Iraq is going through a critical stage, which requires support from its Arabic brothers, Egypt at the forefront, in order to not exclude any Iraqi national faction, specifically the Sunnis,” Al-Nujayfi said.

Al-Nujayfi added that this support is needed to combat terrorism through supporting the Iraqi army with equipment and training “in order to confront the Islamic State in Iraq and Syria (ISIS)”.

After claiming large swathes of territory in Syria and Iraq, ISIS rebranded itself as the ‘Islamic State’ in the summer. The group’s leader Abu Bakr Al-Baghdadi was appointed ‘Caliph’ and is known as ‘Caliph Ibrahim’ by the group.

Shoukry reasserted Egypt’s position towards “the preservation of Iraqi unity” and towards presenting all “possible forms of assistance” to the Iraqi government to move forward in its counter-terrorism efforts.

He stressed the importance of solidarity between the “components of Iraqi society” and of involving all political forces without any “consideration for sectarian affiliation”.

Shoukry arrived in Iraq after a stop in Kuwait, in which he discussed bi-lateral relations with his Kuwaiti counterpart Sheikh Sabah Al-Khalid Al-Hamad Al-Sabah.

In Iraq, he is also scheduled to meet Iraqi President Fuad Masum to relay a message from President Abdel Fattah Al-Sisi on the two countries’ ties and on “support to Iraq’s counter-terrorism efforts”.

He is also set to hold talks with Iraqi counterpart Ibrahim Al-Jaafari to discuss Iraqi efforts in the ongoing inclusive, political process. They will also discuss bi-lateral ties and the expansion of the Egyptian role in participating in development projects in Iraq.

Egypt has been actively calling for concerted efforts and cooperation on regional and international scales to counter terrorism. Shoukry discussed the efforts made to confront ISIS with United Nations special envoy to Iraq Nikolay Mladenov last month.