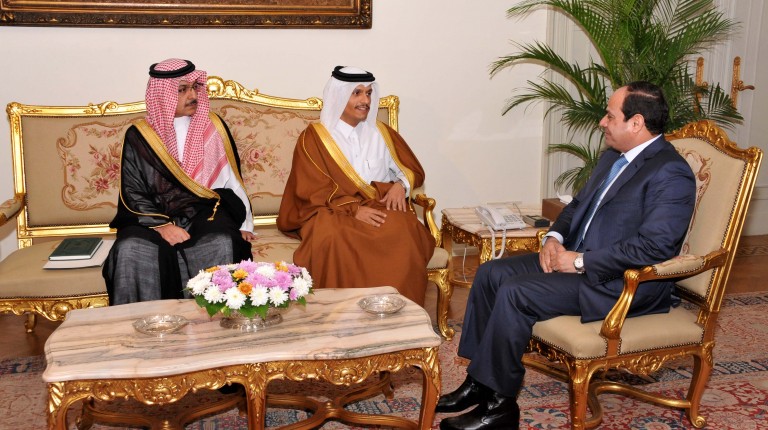 Also visiting Egypt was the President of the Saudi Royal Court Khalid Al-Tuwaijri. The visit comes amid efforts to restore deteriorated diplomatic ties with Qatar.

“Egypt is looking forward to starting a new phase beyond past conflicts, counting on the efforts of all parties to work towards positive relations with Qatar,” the Egyptian Presidency said in a press statement Saturday.

The visit comes to put into effect an initiative announced by Saudi King Abdullah Bin Abdulaziz earlier in November in the “Riyadh Supplementary Agreement”. It is aimed at unifying efforts among Arab countries, as well as urging a conflict resolution between Egypt and Qatar, for which Egypt expressed consent.

“Qatar seeking reconciliation with Egypt is driven and directly affected by changes that occurred in global policies towards Egypt over the past year. Apart from the Gulf States’ support to Egypt, the alterations in US foreign policies have also affected Qatar,” political expert Salah Abdallah said to Daily News Egypt Sunday.

As Abdullah explained, Qatar is under pressure from the Gulf, mainly Saudi Arabia, which has expressed deep support and understanding of the importance of Egypt’s strategic presence in the Middle East as a key for regional security.

“As a result, Saudi Arabia does not wish to lose Egypt over Qatar,” Abdallah said.

“Qatar plays a limited role, in the way that it does not adopt independent policies, but is more dependent on foreign agendas, namely the US. This is also the reason why they have continued to support the Muslim Brotherhood, using an aggressive tone with Egypt,” he added.

Egypt had expressed its rejection of Qatar’s interference in its internal affairs following Qatar’s condemnation of the ouster of Mohamed Morsi in July 2013, which had resulted in the withdrawal of ambassadors to both countries, in addition to tensions between Qatar and co-members of the Gulf Cooperation Council (GCC) states.

“Now for practical reasons, the US has changed its tone and accepted the reality that Al-Sisi came to power upon popular request, and so should Qatar,” Abdallah added.

Egypt is likely to ask Qatar to turn in more MB members. “It is not going to be a major issue for Qatar, if there are any members remaining there, they will find a place in other countries, and there will be no more accusations against Qatar,” Abdullah said.

“But a good measurement of Qatar’s goodwill towards Egypt would be the closing down of Al-Jazeera Mubashir Misr,” he added.

Efforts at reconciliation succeeded last November, resulting in Saudi Arabia, the UAE and Bahrain’s decisions to return their ambassadors to Doha, as Qatar had expressed a mutual desire to rebuild ties.

Meanwhile, political and economic expert Abdul Khaleq Farouq preferred not to put ‘high hopes’ on Egyptian-Qatari economic ties and investment relations, as he believes that Egypt is now ahead of big investment opportunities from different partners, such as China for instance.

“Qatar is fulfilling a role based on strategic motivations with its allies: GCC states on one hand, and the US, their major ally,” Farouq told Daily News Egypt Sunday.