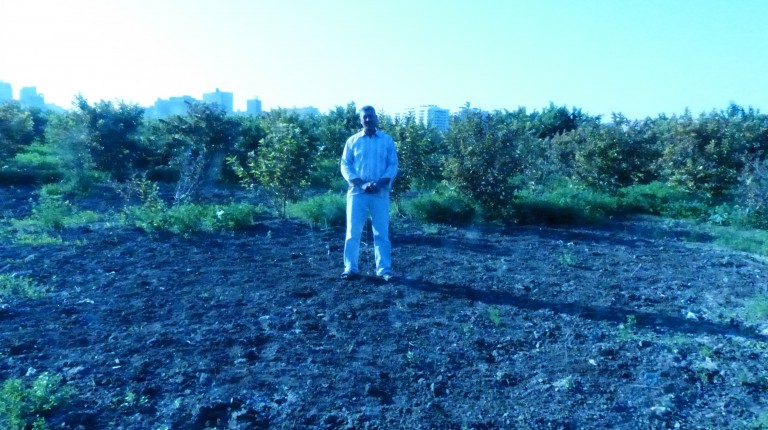 The morning of 20 November began with a rude awakening for Mahmoud Fathy, a resident of the Houd al-Musullas area, in the rural inland of the Montazah district of Alexandria.

Some neighbours came to the house and told him two bulldozers had begun demolishing a building down the street and that his home would be next.

As the nearby vacant building was being demolished, about 350 residents in the area confronted the demolition workers and the 20 security force members that accompanied them.

The bulldozers and security forces were dispatched by the Endowments Authority, to demolish what it said was illegal construction.

“The residents showed security forces their ownership papers, but the police said they are not responsible and ‘you can appeal it in court’”, Fathy said.

Some within the crowd immediately ran into the homes targeted for destruction. “They said ‘If you demolish the house you’ll demolish it on us’,” according to Fahty.

After about 30 minutes the security forces finally produced papers saying that only the walls around four homes were to be taken down.

“If we didn’t insist to see their written papers, they could have not only demolished one house but more houses in the neighbourhood and given this land to a developing company,” said Al-Kabir.

Al-Kabir added that none of the residents had been notified about the planned demolition. “Only 350 came out this time to stop them, but next time there will be more, because now the people are ready.”

The attempted demolition comes after a 13 October appeal by the Endowments Authority, urging the Alexandria governorate to clear 300 feddans of land in Houd Al-Musullas, where the residents live. Most of them are agricultural workers.

The Egyptian Initiative for Personal Rights (EIPR), a non-governmental organisation that specialises in human rights and economic justice, released in a statement on 2 November saying that approximately 5,000 families that live in the rural Montazah area face possible displacement as a result of the Endowments Ministry action.

The NGO also released ownership documents submitted by residents showed that the land was in the legal possession of current residents.

Ahmed Shadley, the North West director of the EIPR says the dispute has its roots in the development of the housing cooperatives, which were developed in 2008 and are responsible for much of the construction projects underway near Houd Al-Musullas.

The EIPR statement said that in 2008 the Endowments Authority signed a protocol  “on the condition that the governorate evacuate the land and install utilities to make way for real estate developments”, though that protocol was rejected by former the governor of Alexandria Osama Al-Fouli.

“The Endowments Authority concluded agreements for housing developments with several housing cooperatives, in addition to the protocol with the Alexandria governorate, without any legal basis for its claim to the land,” the statement said.

Ashraf Abed, a steel worker who lives in the area, pointed to several high rises in the neighbourhood adjacent to the farmers and said: “All these buildings belong to business men. The government will remove the people from their land and give the land to them.”

“The housing associations’ role is to build cheap houses for people, but that’s not true because instead of doing their job these people sell the land and turn a profit,” Abed added.

A source in the Endowments Authority who asked not to be named said it was the residents of Houd Al-Musullas and not the Authority itself that began to sell the land and initiate illegal construction. The source also said the illegal construction, which included high rises, began after the popular protests of 25 January 2011, which led to the ouster of former president Hosni Mubarak.

The protocol with the Alexandria government to evacuate the residents came because of the illegal construction, the source continued.

It is the Endowments Authority that owns the land and the residents simply rent it, said the source. “The army has already started to remove some of the buildings. It’s already not their land. [The residents] use the land in a bad way,” the source said.

Al-Kabir, the lawyer, said he has made great efforts to inform locals not to sign any papers or documents presented to them by the authorities, as he fears that the residents might be “swindled”.

He said he tells residents: “The Endowments Authority will give you contracts to pay for compensation, but you cannot take it.” Shadley, of the EIPR, noted that “most of the people can’t here can’t read or write” and are ignorant of the laws and thus are easily taken advantage of.

Al-Kabir said:  “The police do nothing and the judicial system is slow, so the courts may reach a decision after they lose their house because the Endowments Authority is doing demolitions trying to get people off their land,” as evidenced by the situation on 20 November.

Many of the residents are distrustful of the authorities and say the behaviour of security forces ranges from harassment to indifference.

On 22 September 2009, Hassan Shandy, a farmer who had been organising local residents against evictions, disappeared and his dead body was found the next day with his hands and legs tied. On his body was a note that said: “This is the punishment for the leader of the farmers.”

Though no one was ever arrested for his murder, his nephew Ibrahim Shandy blames moneyed interests that want to seize the land for real estate development.

“Farmers are now scared of meeting the same destiny as Hassan Shandy,” said Abed, the resident who works in the steel industry.

The son of the slain farmer also complained of harassment. “One morning at 4:00am in November, security forces entered my home accusing me of terrorism. The police said they came to search for weapons. On another evening someone lit a fire to my front porch while I was sleeping,” he said.

Al-Kabir noted that the Endowments Authority can claim that a farmer is occupying land illegally and the farmer could then be arrested. “When people get arrested, they have to pay money to finish their paper work. The procedure takes a lot of money and they don’t have a lot of money,” he continued.

Your average farmer is detained about three times a year, said Ibrahim Shandy. “[The arrests] come [regularly] like our harvesting seasons,” he joked.

Abbas Hamed, another farmer, said that he was detained and was made to stay “with criminals” for three days with no food. He also said that police beat him in the back of the head.

Many of the families in rural Montazah complain that they are generally ignored by the government and suffer from a lack of public services. In some areas, locals have installed their own sources of electricity and water irrigation, and have hired their own private garbage pickup.

Hasan Abdel Wahed is the father of two children. He graduated at the top of his class in Alexandria University’s faculty of agriculture, and despite having had other opportunities, he decided to sacrifice a “good job” in order to work the land his father and grandfather had worked.  He does not count the hours in the day he spends farming, but says it is usually from sunrise to sunset, sometimes longer.

He is proud of the 15 feddans of eggplants, cabbages, guavas, and beans, his family farm harvests.

Though he says he gets little support from the government, what he does get is “plenty of sewage and pollution”, which has had a negative impact on his farm, reducing his seasonal harvest from a yield of about 230 to 300kgs to about 80kgs.

“The businessmen, when they build these buildings, their sewage leaks into the irrigation of the farmers. We don’t have clean water to farm the land because the sewage decreases production. It also affects the taste of the food. My land is dying because I can’t get clean water,” Abdel Wahed said.

He says the Ministry of Agriculture is supposed to give farmers subsidised fertiliser and connect them to networks of irrigation, but most of the water from the Nile is lost to the sea and irrigation water mixes with sewage.  He pointed out one of his canals, where the water has turned white due to contamination from with pollutants.

“A long time ago this canal had fish. Now all the fish are dead. The trees in the middle don’t grow.   All the trees I planted here have been destroyed,” he said.

Abdel Wahed says he has tried to farm the land three times and that pollution has killed the soil’s productivity. He does not have the resources to treat it, he said, nor does he know what he will do next.

“The government will take me to court and the authorities will say the farmers are destroying this land,” he added.

Asked what farmers would do if they lost their land, local resident Ahmed Hadad said: “We’re not going to lose this land. If we do we’ll die here.”

“Some of the people have stopped appealing their case because they feel it’s useless,” Shadley added.

Abed offered a more optimistic assessment, referring to 7 April, 2012, when protests prevented the Endowments Authority from demolishing twelve homes, forcing the government to make a deal with the residents.

“They want to protest but they are scared their request will be refused,” because of the authorities’ tendency not to grant permits for demonstrations, Shadley noted.

“If they plan on protesting without a permit, they may be arrested because of the Protest Law,” he said, referring to the legislation that was passed in November 2013 by then-interim president Adly Mansour. The law requires all demonstrations to receive prior permission from the police. In the past year, Egyptian courts have handed stiff prison sentences to those who violated the law.

“We don’t want to fight. We want the government to sit with us and have a negotiation,” Al-Kabir said.

He added: “We have the papers to solve the problem. The problem is that the government is siding with the people who want to take our land.”