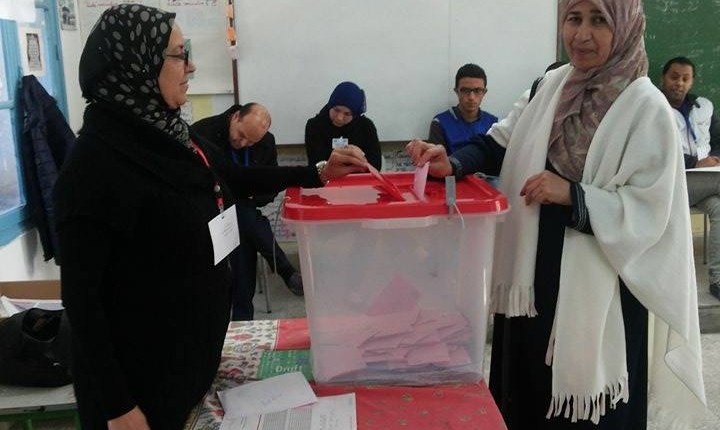 Tunisians headed back to the polls on Sunday for the run-off round of the country’s first democratic presidential elections.

In the first round, on 26 November, Tunisians chose among 22 candidates. Béji Caïd Essebsi, the 88-year old leader of the secular pro-business Nidaa Tounes, won 39.5% of the vote. The current interim president and the leader of the centre-left secular party Congress for the Republic, Moncef Marzouki, obtained 33.4%. A candidate must obtain over 50% of the vote to win, hence the run-off.

“I voted Marzouki,” said Zenab, a 40-year-old housewife who declined to give her surname because she said she is afraid of the police. “I don’t want to go back to the dictatorship.”

Prior to the 2011 revolution, the regime of Zine Abidine Ben Ali restricted the wearing of the hijab, and Islamist movements were subjected to a heavy-handed crackdown.

“Marzouki is a human rights’ defender,” she said. “He respects everybody’s freedom. I have confidence in him. With Essebsi, I’m afraid I won’t have my religious freedom anymore.”

Zenab, who said she voted for the Islamist Ennahda movement in the October parliamentary elections, added: “The revolution took the ancien régime out of politics, but now they are coming back with elections. The RCD party [Ben Ali’s party] has only changed its name.”

“I agree with her”, said her friend Wassila, a 46-year-old housewife. “I also voted Ennahda in the parliamentary election and Marzouki in the presidential one. I’m in an association that helps poor people and almost everyone there supports Ennahda – we are afraid that if Essebsi [gains] all the power, we won’t be free to work anymore because he was with Ben Alì, who was against free religious expression.”

The Ennahda Movement, the country’s leading Islamist party, which came second in last month’s parliamentary election, did not field any candidates. The party said it wanted to allow its supporters the freedom “to chose the person they consider more appropriate to become Tunisian president”, according to a press release.

“I voted Essebsi,” said Najiba Rahoui, who is 63 and retired. “He is the right man for this moment. He is a wise, contemplative and charismatic leader—he knows how to speak to the crowd.”

“After the revolution, many people did what they wanted, they didn’t respect one another, there was anarchy in the name of freedom,” she said. “He has got a lot of experiences and he promised more strictness to make people respect the law.”

“I don’t think that with him the old regime will come back: now Tunisians are vigilant and they won’t permit it. Moreover he doesn’t have the majority. I’m not against an alliance with Ennahda, to balance the government.”

In Tunisia, the presidency lost much of its power after the 2011 uprising that toppled the regime of Ben Ali. According to the new constitution passed in January 2014, while the president is “responsible for setting the general state policies in the domains of defence, foreign relations and national security”, executive powers rests primarily within the office of the prime minister.

“I detect the smell of victory, because Tunisians are irritated at the idea of a comeback of the dictatorship,” said Marzouki at a political rally in the south-western town of Tozeur. He added that Essebsi represented “an old regime that is known for torture and corruption”.

In statements delivered on Tunisian radio station Express FM, Marzouki said: “Everyone must persuade people who are still unconvinced. It is not logical and it’s not in your interest to vote for people who brought you into this situation. It is suicide.”

Essebsi has called those who voted for Marzouki “Islamists” and “Salafi jihadists” and blamed his rival for Tunisia’s woes.

Since the 2011 revolution, Tunisia has experienced economic stagnation, an increase in unemployment, and the emergence of militant Islamic groups along the border with Algeria and in working-class neighbourhoods and towns in and around Tunis.

The borders with Libya were closed ahead of the election over fears of possible militant attacks.

ISIE, the state authority responsible for the election, asked both candidates to respect political campaign rules and refrain from personal attacks. Chafik Sarsar, ISIE’s president, affirmed that a “candidate who will bring into question [the] integrity and credibility of the elections will receive a rebuke”.

Essebsi managed to garner several high-profile endorsements in the run-up to Sunday’s poll. They included Slim Riahi, founder and leader of the Free Patriotic Union (UPL); Mustapha Kamel Nabli, and independent and the former head of the Tunisian Central Bank; and Ali Chourabi, an independent magistrate. A total of ten political parties endorsed Essebsi.