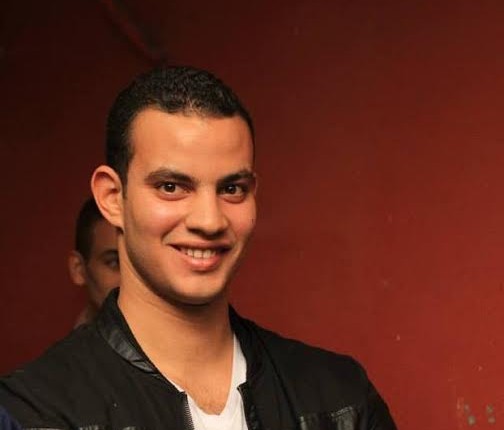 With tons of confused ideas inside his mind and a small laptop in front of him, novelist Mohammed Magdy spends most of his time writing about human conflicts, political corruption and crimes creating his own unique mixture of romance, thriller and suspense. Because background noise helps him concentrate more, he resorts to coffee shops where people’s faces and conversations inspire him to add some new chapters to the story he writes.

In August 2013, his first novel entitled “Inside the glass room” was published, attracting attention to the birth of a talented young writer. After just a year, his second novel “All the Bad Things” came out onto the Egyptian book market in November 2014 to meet the demands of excited readers.

The novels of the author succeeded at listing amongst the best seller novels for a long time at bookstores.

Magdy spoke to Daily News Egypt about the obstacles that face the novice young Egyptian writers nowadays, his future novels as well as the local and international authors and book markets around the world.

How and when did your passion for writing started to dominate your life?

I was drawn to reading novels since I was 10 years old or younger. However, my passion for writing started only three years ago when I went through a very tough experience. I was deceived by a fraudulent company and I lost most of the money I was saving for my marriage in a failed project. I got very depressed and I lost hope and faith to succeed in anything in my life and that’s how the idea of writing inside the glass room novel came up to my mind. As I felt so guilty and regretful, I wanted to discuss how people can overcome the sins they committed in their lives and how the feelings of guilt and regret can ruin their lives.

Although I studied management at the German University in Cairo and I currently work with my father in his private school, I find writing as my only cathartic outlet to release the bad feelings and negative energy and face the hardships life throws at my face every day.

What is the main message your novel “Inside the Glass Room” aimed to convey?

The novel introduced five characters with different social, cultural and educational backgrounds. Each one of them has committed a big sin that he can’t forgive himself for ranging from rape, fraud, prostitution to drug addiction and murder.  I wanted to convey the message that it’s never late to atone the past’s mistakes. The past never dies and you’ll reap what you sow and pay for your mistakes sooner or later so you have to think twice before hurting anyone or causing any harm.

How did the idea for your second novel “All the Bad Things” come to your mind?

The novel is mainly based on a famous car accident that killed one of my friends in 2005. The killer was a prince from one of the Gulf countries and he went back to his country without being accused of the murder. I wanted to shed lights on the accident and the political corruption behind it showing how revenge feelings can ruin man’s life and cause harm to the closest people to his heart.

Who are your favourite writers?

As for the foreign writers, I believe the Swedish writer Stieg Larsson who wrote the famous Millennium series is one of the best authors of all time. In addition, I love reading the translated works of Haruki Murakami, Agatha Christie and George Orwell. Regarding the Arabic writers, I prefer to read for Mohammed Mansi Qandil, Naguib Mahfouz, Bahaa Taher and Yasser Ahmed, the author of “Aks El Etegah and Gomhoreyet El -Qerd El-Ahmar”, although he’s not a very well known writer.  In my opinion, Ahdaf Soueif is also one of the best Arabic female writers and I really feel so bad when I mention her name in front of writers and readers, and many of them tell me they’ve never heard about her before.

In your opinion, what are the main obstacles that face novice young writers when they start their career?

The biggest obstacle is to convince a reputable publishing house to publish your work. I had no contacts and I knew no one in this field. I didn’t know where to go or who to talk to so I went to my library and collected the names of the publishing houses of my favourite novels and started contacting them via e-mail. Out of 13 houses, only six replied to my e-mails and showed some interest in publishing my novel. I compared the offers and chose the best one. After publishing the first novel, it was easier to publish the second one as a big house contacted me asking to take its publishing rights.

I always believe that good work will always find its way to success regardless of all the challenges and obstacles, however, I warn young writers from being deceived by the publishing houses that offer printing and publishing the novels on the writer’s own cost.  They usually publish small number of copies with less quality aiming to cheat on the author.

From your own point of view, who are the top young writers in the Egyptian book market nowadays?

No one can deny that Ahmed Mourad and Mohammed Sadeq could occupy a special place among the top Egyptian young writers during the last few years. I also find that novelists like Ahmed Salama and Ahmed Abdel Megeed as well as some young horror writers such as Hassan El-Gendy and Mohammed Esmat could attract a large sector of young audiences lately.  Although I don’t prefer to read to many of them, I can’t omit their outstanding success.

How do you contact your readers? And how do you receive their critical reviews?

I consider social media, especially Facebook and Goodreads, as main channels for communicating with my readers. Before publishing my first novel, I had about 400 friends on Facebook, now I have more than 3,000 friends and 700 followers. I do appreciate their opinion and I accept any criticism as I find it a good way for improving my future work.

If you weren’t a writer, what would you like to be?

If I wasn’t a writer, I think I would issue an economic magazine devoted to discussing the financial corruption issues that take place everywhere around us. I would also establish my own publishing house to give all young writers an opportunity to publish their work without any restrictions.

What are you favourite genres of music?

I prefer soft rock and metallic genres of music. I’m a big fan of the American heavy metal band Savatage because their topics are more concentrated on the life and death issues which I find so inspiring. Unfortunately, I’m not a big fan of the Arabic singers as most of them use repeated lyrics to describe the same love and hatred feelings without any sense of novelty. However, I listen to Cairokee band as I find their lyrics more various and innovative.

Do you have any future projects or novels?

Yes, I started writing a new novel which will take the readers into a historical journey back to World War 2 and allow them to see how some incidents from the past will influence the lives of our characters in the present. We will see Youssef the devastated guy who left his family and moved to Hurghada to be isolated from the whole world and Zeina who lost her beloved husband in a car accident during their honeymoon and went into a coma for 10 years.  I think this novel will introduce a new literature genre and I expect it’ll achieve a lot of success, God willing.

What are your future dreams?

My biggest dreams are always associated with my family and my little daughter. Regarding my career, I dream of translating my novels into many languages and distributing them worldwide. I also hope to be able to turn my novels into movies as it will attract large numbers of audiences to read the original novel. I have some friends in the filmmaking fields who are interested in turning my first novel into a movie scenario nowadays.