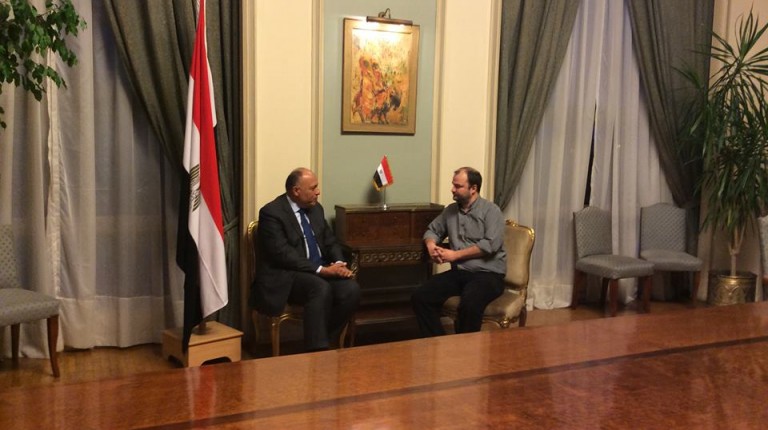 In an interview with Greek media, Egyptian Foreign Minister Sameh Shoukry stressed the importance of consolidating bilateral cooperation between Egypt and Greece, according to a foreign ministry statement released Monday.

Shoukry said the bilateral cooperation would take place in the political, economic, and cultural fields .

The tripartite committee consisting of Egypt, Greece, and Cyprus will continue to work on advancing cooperation between the three states, Shoukry clarified. In addition, boosting cooperation in the field of energy, and the discovery of hydrocarbons in the eastern Mediterranean was reiterated as important.

The summit’s objective was to develop a tripartite partnership in various fields including “promoting peace, stability, security and prosperity in the Eastern Mediterranean in all fields (political, economic, trade, culture, tourism)”.

In separate talks, Al-Sisi and Anastasiades had discussed the potential of cooperation in the field of natural gas.

Anastasiades, Al-Sisi and Samaras have been challenging Turkey’s efforts to chart deepwater gas deposits in areas of the east Mediterranean claimed by Cyprus.

The leaders stressed the importance of respecting the sovereign rights and jurisdiction of Cyprus over its territorial waters. They called on Turkey to permanently cease all seismic survey operations underway within the maritime borders of Cyprus.

Turkey does not recognise Cyprus as part of the island’s Greek-Turkish ethnic divide. It has occupied the northern half of the island since 1974.

The maritime border around the Mediterranean island has also been a major point of contention between Cyprus and Turkey.