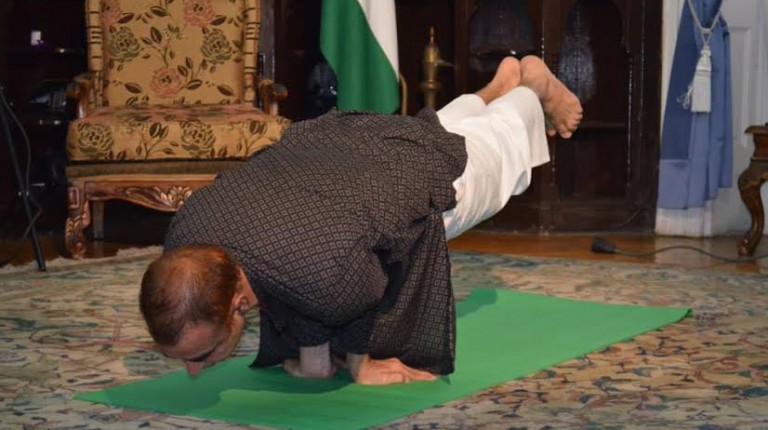 No matter how much technology develops, medicine improves and science finds solutions to serious illnesses, traditional natural therapies still have the magical influence of improving health. For some, having a healthy life style is the best solution to maintain fitness and productivity. Yoga is one of the best ways to keep one’s mind clear and body healthy.

On 11 December, the United Nations declared 21 June as the International Yoga Day with the approval of over 175 countries.

The Indian Embassy in Egypt celebrated the approval, which was first mooted by the Indian Prime Minister, by creating first alternative medicine ministry in the government.

“Yoga does not belong to a certain heritage; it’s a contribution to humanity,” said Navdeep Suri, the Indian Ambassador in Egypt. “It’s a way of living in peace and health.”

Yoga is the science of living right. It originates from the word “Yuj”, which means ‘to yoke’ or ‘to unify’. Both body and brain unite together to expel the toxins out from one’s system, to achieve complete recovery and encourages a one-pointed mind.

It harmonises the human mind and spirit in a powerful synthesis, as it offers an approach towards health and well-being.

India’s history is rich with documentations of people practising yoga, with domes portraying yogis, indicating that as early as 2600 BCE people were practising yoga.  “So yoga is as old as the pyramids,” said Suri.

Suri believes that colonisation erased the identity of every country it occupied, and yoga as a treatment is one example of this.

“When someone feels sick, they prescribe you a medicine consisting of pills, but it is never suggested to practise yoga or take natural herbs,” he says.

As a way of reviving their ancient traditional spirit and protecting them against westernisation, India established a Ministry for Alternative Health, including yoga and homeopathy.

The ministry, which is called AAYUSH, was previously a department in the Indian health ministry, and it is responsible for Ayuverda, Yoga and Naturopathy, Unani, Siddha and Homeopathy – different forms of alternative therapy.

“Now the patient has the option to choose between being treated in a western way or a traditional one, just like yoga classes and herbal [treatments], and their medical insurance shall cover both,” Suri continued.

The Indian government has allocated $100m for scientific research to prove the efficiency of alternative medicine, to be applied globally. “We traditionally know for sure this kind of treatment works in healing patients with several illnesses, even with ones that western medicine hasn’t reached a cure for, like Alzheimer’s and Parkinson’s. But we just need to scientifically prove it,” Suri added.

“Yoga is not only for the spirit. It is real scientific knowledge that after 200 years of colonisation convinced the world otherwise,” he added.

The ministry is currently responsible for spreading awareness of yoga as a treatment by proving this, and giving the yoga trainers around the world the newest, most correct way of doing so. The first country is Egypt.

“We want to start a conversation with the Ministry of Health in Egypt to work together on opening more alternative medicine centres in several governorates for the public, and to send a trainer to teach the Egyptian trainers, or have them take an intensive training course to receive a yoga certificate in India,” said Suri.

Yoga is practised internationally, and even though its roots go back to the Hindu religion, it is not exclusively for the Hindu. Suri sees that looking at yoga from that certain perspective is a narrow way of thinking, and a shallow point of view.

There are millions who practice yoga as a daily life routine, and it is estimated that yoga generated around $2bn revenues in the US alone, even though there are ten different schools of yoga.