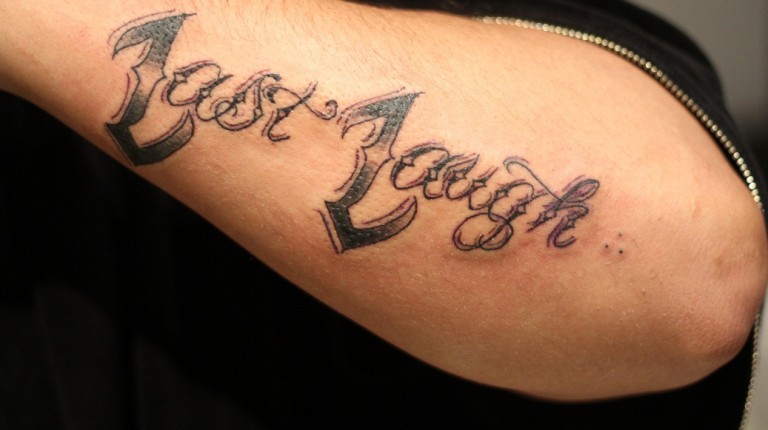 Tattooing is a practice that dates back to the birth of civilisation – the mummy of Amunet from Ancient Egypt is said to have be inked. Fast forward several thousand years to the present, and the ever-changing personality that surrounds tattoos is still very much alive; perhaps more than ever, particularly in the Middle East, where cultural norms are constantly being challenged.

This challenge has been expressed through street art, films, music, etc. But unlike the walls that have been scrubbed, and the films that have been censored, tattoos remain, buried deep beneath the skin, as a permanent fixture for all to see.

This past weekend, “Nowhereland Tattoo”, a parlour set-up in March 2012 in Cairo, held the Middle East’s first ever tattoo expo. The atmosphere is fervent, complete with artists, clients, friends and on-lookers who would never dream of getting a tattoo, but are still supportive and intrigued by the buzzing ink-soaked needle.

Nowhereland Tattoo was created by Orne Gil, an Italian-Venezuelan who intends to break tattoo taboos in countries where the art form has been restricted due to cultural norms. She says that “doing these kinds of events [tattoo expos], posting on Facebook about tattoos and tattoo culture” and “giving a lot of information to the people”, has helped begin to change a mentality that is still against getting them.

Gil takes a quick break from tattooing a client to smoke a cigarette, and tells Daily News Egypt that she started her tattooing career four years ago in Padua, Italy. She says that she “was first just looking for a place to work while she attended university”, which landed her a job as a receptionist at the “Blue Velvet Tattoo Studio”. Soon after, her interest peaked and she was taken under the wing of tattoo master Paulo A H McIntyre, who first introduced her to the art form.

Gil goes on to say that she used to focus on “traditional and old school tattoos”, but since relocating to Cairo her style has varied. Gil says her style has shifted because most Cairenes “are just starting to get tattoos and they don’t know what they want and they don’t know anything about tattoo art yet”. Tattoos are considered forbidden in Sunni Islam, which is a huge hurdle for a tattoo artist to overcome, especially in Egypt, where the country is predominately Muslim.

The taboo associated with tattoos has forced some artists, who lack sufficient experience, to work out of their bedrooms, creating subpar work. Gil tells us that some “people have machines from China and supplies from China”, which carry a mediocre performance, “and they are making a mess, so we’ve been fixing and covering”.

Tymur Reda, a Russian-Egyptian tattoo artist, who has been tattooing for eight years and now works at Nowhereland Tattoo studio, says that “it’s like music and art here. It’s not that there is no talent, it’s just that there are no opportunities provided by others – the forces that be”.

Gil agrees that the tattoo culture has changed somewhat in the last three years, but people are generally still reserved. Gils says that “more people are getting tattoos and more people are getting used to seeing people with tattoos”, but adds that Cairenes looking to get inked “always say: ‘I want to get a tattoo but I want to know where I can remove it’, or they’ll ask for non-permanent tattoos.  So they are very worried about it.”

According to Gil, most of her clients tend to be “middle-high class and usually… [have] travel[ed] abroad and have a different idea about tattoos”. She has yet to tattoo anyone’s neck or face, but plenty of people ask for tattoos on their forearms, getting quotes, butterflies and birds, or as Gil puts it, “small stuff”. Gil has also tattooed plenty of fingers. She says: “I’ve been doing

fingers for guys that want to avoid the army so they say: ‘tattoo my hand so I can get out’.”

Dan Watkins, the client Gil was tattooing earlier and an expat from the UK who is now working in Saudi Arabia and comes often to Egypt, got a tattoo at the expo on the left- side of his abdomen of a quill inspired by Egyptian design. Watkins, who has lived in Egypt both before and after the revolution, says he’s recently noticed a “real confidence in the youth” that he did not sense before.

Reda says that he was recently looking at some photos of himself when he was in a metal band, and says it was “something no one in Egypt was really doing at the time, and now there is a scene, and I thought wow I was there kind of from the beginning of it and I hope to look back at this expo in a couple of years and feel the same way”.