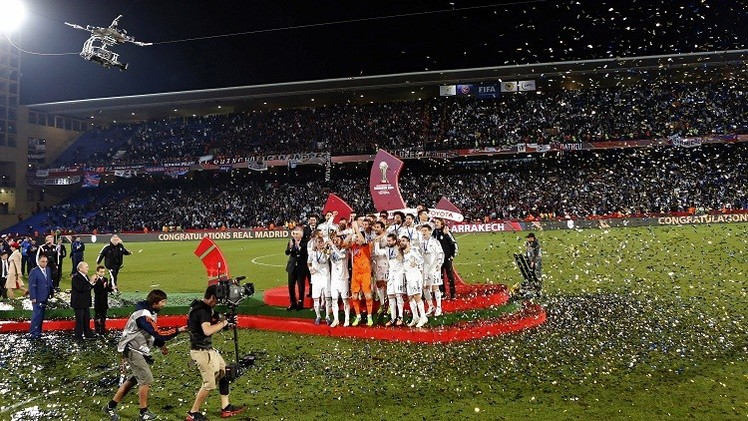 The curtain came down on the FIFA Club World Cup, held in Morocco between 10 and 20 December, with Spanish team, Real Madrid, winning the world title for the first time in its history. The win takes its tally to 18 world championship titles, equalling the number won by Italian AC Milan and Argentina’s Boca Juniors. The team comes behind Egypt’s Al-Ahly, who tops the list of most international club titles wins with 20 championships, after seizing the African Confederation Cup.

In 2014, Real Madrid won the titles of Champions League and Spanish King’s Cup, in addition to both the UEFA Super Cup and the FIFA Club World Cup.

The team also received yet another honorary title – Winter Champion of the Spanish League. It ended 2014 successfully breaking the Barcelona record as the Spanish club with the most goals scored in one year, setting a record of 178 goals. This is more than Barcelona’s record of 175 goals in 2012.

This title makes Real Madrid the team with most coronations among all Spanish teams, and holds 79 titles compared to 78 for Barcelona. Real Madrid’s achievements do not stop at wining the Club World Cup soccer tournament, but the club will receive €5m for winning the world title.

In contrast, Morocco’s losses for hosting the Club World Cup ranged between $20m and $30m as logistics expenses. Several reports suggested that these losses are due to transportation and accommodation expenses, particularly related to “VIP guests”.

Morocco also spent a lot of cash, due to the sudden change of location for the semi-finals from Rabat to Marrakesh, as a result of the poor condition of the capital’s Stadium “Moulay Abdallah”. It was reported that the distribution of a large number of free tickets also caused major losses.

Rabat Stadium was filled with water after rainfall during the match between Western Sydney and Cruz Azul. The poor conditions caused by this hampered the completion of hosting the tournament. This caused anger to spread around the country, which has invested $25m in renovating stadiums for the FIFA Club World Cup.

Moroccan King, Mohammed VI, has temporarily suspended the activities of Sports Minister, Mohamed Ouzzine, and prevented him from attending the final between Real Madrid and San Lorenzo. The Minister also appeared before the Moroccan parliament to respond to interrogations of representatives about the capital’s Stadium scandal.