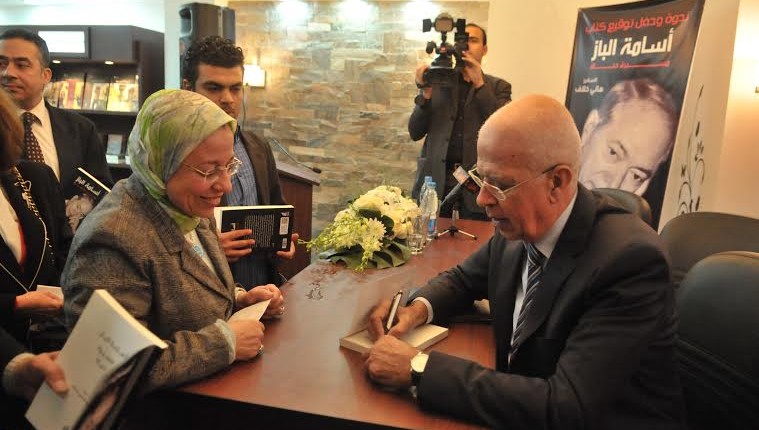 In memory of Osama El-Baz, a year after his death, Hani Khalaf, former Egyptian ambassador in Libya and a close friend of El-Baz, wrote a biography about him that was released on 24 December.

El-Baz, an Egyptian diplomat and Senior Advisor to former President Hosni Mubarak, was known as “the dean of the Egyptian foreign affairs”. He had a major role in leading the foreign affairs of Egypt and the Camp David negotiations in 1979.

The book, entitled “Osama El-Baz, Maseret Hayah” or (Osama El-Baz: The Path of a Life), was released with fanfare in a ceremony with many celebrities, politicians and media professionals like former presidential elections candidate Amr Mousa,  as well as Hany Khafaga and Farida El-Shobashy.

The biography’s ten chapters revived the genesis of the “extraordinary personality whom exceeded all expectations”, as politician Moustafa El-Fekki writes in the book’s introduction.

“El-Baz is one of the few people who had all the qualities of right thinking, humanity, ethics and legal authority at the same time, and he connected them all together in way that created his unique personality,” El-Fekki said.

He was also the only politician who ran both internal and external affairs correctly in parallel, as he only cared about the public interest, not his own, according to El-Fekki.

The author does not only present El-Baz’s journey from birth until achieving his PhD from Harvard, but also studied and analysed his attitude towards the Arab-Israeli conflicts throughout the years.

Close friends of El-Baz gave speeches at the ceremony to talk about the way he lived his life away from politics and the spotlight.

“What most people don’t know about him was that he used to work as a butcher’s boy in the United States while he was studying for his law PhD,” said Nabil El-Araby, Secretary-General of the Arab League.

He was also very talented at calligraphy and handwriting in both English and Arabic; so much so that he himself designed the ceiling of his apartment in the US with Quranic Verses, according El-Araby.

El-Baz’s son, Basel, spoke of how his father was always around whenever he needed him to be, and no matter how busy he was, he never felt the distance.

“Even though some days would pass without seeing him, I always felt he’s here for me to give me the support and help I need. He always drew me the life steps I should take to lead me to success,” said Basel, his eyes glittering with tears.

Osama El-Baz died last year at the age of 82. He was born in Sharqeya governorate in 1931, and graduated from the faculty of law. He is the brother of the famed NASA geologist Farouk El-Baz.

He was considered to be the youngest ever Egyptian ambassador in 1977, and was sent to Israel where he negotiated the terms for Sadat’s visit to Israel.  In Hosny Mubarak’s era, El-Baz was his foreign affairs adviser, and he was sent on sensitive missions.

In search for the new Osama El-Baz