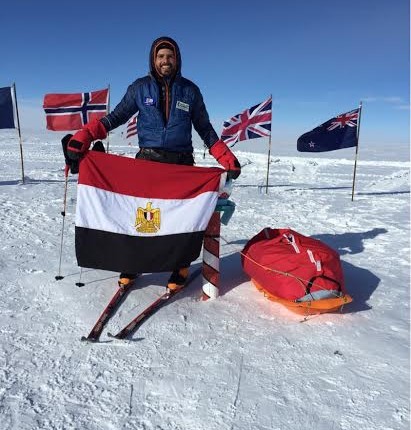 At the South Pole all directions face north. It is one of two points where the Earth’s axis of rotation lies. Located on Antarctica, it is one of the driest, windiest, and coldest places on earth. The frost, the isolation, and sheer magnitude of dangers that can arise are enough to make this endpoint an awe-inspiring place – a humbling resort that many quiver at the thought of. To the adventure seeker, however, it is a must-go destination. It is what separates those who have dreams, and those who act on them.

Omar Samra is proud to announce, that on 29 December, after crossing 111km, he skied to the last degree of the South Pole to raise Egypt’s flag. This accomplishment brings him one step closer to achieving his overall goal of completing the “Adventurers Grand Slam”.

Along with a team of eleven other adventurers who hail from Germany, Russia and India, Samra started his trek from the 89th degree. Every day the team would ski between seven to nine hours, and cross roughly a distance of 14km to 16km, depending on weather conditions.

September to March are considered Antarctica’s summer months, the sun is consistently above the horizon. It never gets that high in the sky at the South Pole though, reaching a maximum height of 23 degrees. Much of the sunlight the Pole does get is immediately reflected upward because of the white snow. This phenomenon, along with the altitude (about 2800 metres) is what makes the South Pole one of the coldest places on Earth.

“It was a rough start for me at the beginning,” Samra said. “I had a stomach microbe causing me severe pains; and I was on antibiotics for five days, which affected my performance early on; especially, that we had to pull sleds weighing 80kg throughout our journey. However, as I improved, I started building more stamina and was able to make it. With this achievement close to the New Year, I hope that 2015 will be a good year for Egypt and for everyone who is passionate to pursue his dreams.”

Samra started his trip by flying to Punta Arenas, a town located in Chile. From there, he flew on a special Russian aircraft that was designed to be able to land safely on the frozen runway in Antarctica. Afterwards he got on a propeller-based plane and flew to the 89th degree.

Samra, who has already completed climbing the seven highest summits in world in June 2013, now needs only to hang the Egyptian flag on the North Pole in order to complete the “Adventurers Grand Slam”.

Samra will attempt to get to the North Pole in April 2015. It is an accomplishment that will place him in a special club with no more than 40 members, a club that will see its first Egyptian, a member of the “Adventurers Grand Slam”.