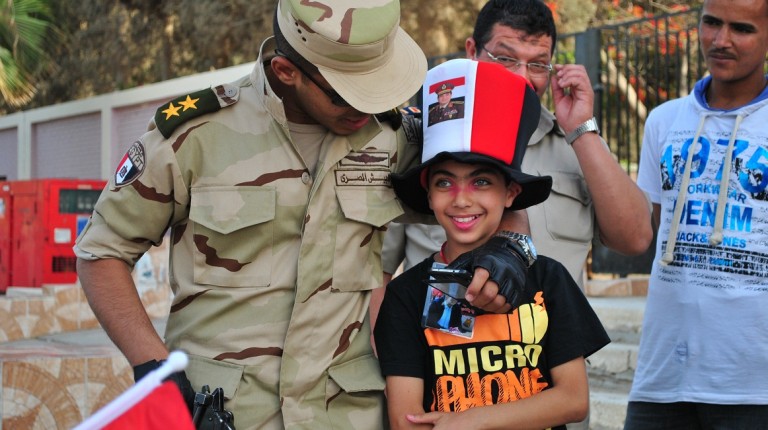 On a recent morning I interviewed a homeless woman in Ramses, Cairo and then asked her if I could photograph her. She agreed and began to pose for me.

“What are you doing?” yelled a woman close-by. “Are you taking a picture of her?!” she continued as she grabbed my bag and began to push me before she bit my hand a few minutes later.

People gathered as the woman attempted to take the camera from me. “What are you doing? Why? Who do you work for?” they all yelled as they joined in. “You are shaming Egypt! She’s shaming Egypt!” another man screamed as the woman I had been taking a picture of quietly stared from afar.

Sarah El-Masry works on issues such as freedom of expression and media for the independent Association for Freedom of Thought and Expression (AFTE). She said that “the narratives and rhetoric employed by the current regime are definitely influential and they impact the perceptions of people”.

On several separate occasions, the military has held mass festivals and celebrations for people. On the third anniversary of the 25 January Revolution, Tahrir Square was surrounded by tanks, filled with crowds waving their Egyptian flags and singing along to the popular pro-military song “Teslam El-Ayady” (Bless the hands), which was blaring form loudspeakers. Meanwhile, military helicopters drew hearts in the sky above Tahrir.

A few streets away, in downtown Cairo, police forces were using teargas and live ammunition to disperse demonstrators who were commemorating the anniversary of the revolution by chanting anti-government slogans.

According to El-Masry: “The war on terror is an important space for furthering this coupling and increasing the legitimacy of the current regime.”

The presidency holds conferences on how to fight terrorism; the president and the foreign minister meet with heads of different states to discuss the support they can give each other in “the fight against terrorism”; and state-media channels run news tickers that read “Egypt fighting terrorism”.

Mohamed Qadry Saeed, a military expert at the Ahram Centre for Strategic and Political Studies, commented: “The Egyptian military has over a hundred years of history and it has been around to protect the state and the country. Without it there would be utter fragmentation.”

Militarised political symbols are present on roads, on the backs of buses, in stores, in schools, and in songs. For example, along the Tantawi highway in New Cairo one can see billboards that read: “Egypt first” and “The military sacrifices for Egypt”. The Tantawi highway, like many other highways and roads across Egypt, was built by the military.

Public buses frequently feature a poster of a soldier cradling a baby. A slogan beneath reads: “The military and the people: one hand.”

It is also common for the army to represent itself as a “timeless saviour” of the nation in military-published books such as “The Egyptian Army: Throughout Seven Thousand Years”, and claiming, as former Field Marshall Mohamed Hussein Tantawi has, that “many of the adopted [military] strategies are identical to those of the ancient Egyptians”.

In a letter included in the book’s introduction, Tantawi promises the Egyptian people that “their armed forces will always be committed to defending Egypt and the rights of the Arab nation, as we always used to throughout history, with a firm determination to maintain the principles of international peace and security under the wise command of President Mohamed Hosni Mubarak, the Supreme Commander of the Egyptian Armed Forces”.

Some activists argue that Egyptian nationalism serves as the ruling ideology of the military regime, and is manifested, maintained, and concentrated in almost all state institutions.

“The current head of the regime has directly and repeatedly equated the current regime to the military in his rhetoric and speeches, which helps embed and propagate the rhetoric of nationalism and pride. In other words, the regime gained its legitimacy drawing on the legacy of the military and the fact that the head of state is a former member of the military,” said Sarah El-Masry, who has worked on documenting government violations, adding that this reinforced the “coupling between the state and the military.”

In addition, all such institutions are unified under the common goal of maintaining the military relations of production.

Ahmed Abdel Naby, a lawyer working with AFTE, stated that Egyptian nationalism has been used to legitimise a number of human rights abuses, including a crackdown on freedom of expression.

“Any regime will use specific ideas as a cover to legitimise crackdowns. During Gamal Abdel Nasser’s time, anyone who went against the ideas of Arab nationalism was considered a criminal. In Sadat’s era the same thing took place with a different ideology. During the Muslim Brotherhood rule, it was anyone who went against Islamist ideas and thought,” Abdel Naby said.

He added that now it is important for the regime to understand that it cannot assault all opposition on the basis of Egyptian nationalism, and that “we must be allowed a space of free expression because this is a basic human right.”

Abdel Naby stated that this crackdown threatens everyone, and not just those who are politically active.

Over the past year, 10,000 have been arrested, according to figures from the Ministry of Interior, although rights groups cite much higher figures.

To date, the military continues to releases media statements every few days reporting on how many “terrorists” it has killed.

“By pointing these violations out, I believe we try to preserve the facts and the events on the ground and their original narratives; we protect them from being distorted,” El-Masry said.