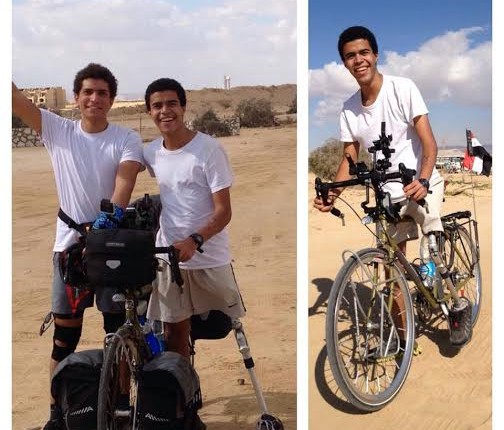 Audrey Hepburn is quoted as once saying: “Nothing is impossible, the word itself says I’m possible.” Little did she realise that it would describe the life of a young man several decades down the line.

Yassin Zoghby, a 16-year-old high school student, hit the road travelling from Cairo to Ain Shokhna on his bicycle. That would be normal – except for the fact that he lost a leg in an accident six years ago.

Anyone’s mood would be lifted upon seeing Yassin even for only a short period of time, from the warm wide smile that never leaves his face, with his liquid, glittery hazel eyes to the jokes which keep finding their way out of his mouth to burst people around him into non-stopping laughter. It wouldn’t take a person long to realise that Yassin is a radioactive source of joy and optimism.

While snorkelling in the Red Sea six years ago, Yassin was hit by a boat, leading to the loss of one of his legs and serious damage to one of his arms. Yet his passion for bicycles grew and never faded away.

“Jess – as I call her – is not only my bicycle, it’s more likely to be my wife,” said Yassin. “I talk to her a lot, spoil her tires and fight with her, yet can’t stay away from her.”

Yassin sees his bicycle as his saviour, it’s the passion that first led him out of his accident and currently the reason he tries to stay fit to be capable of driving it. To him, it is a preventing reason for him from doing anything that might harm his body. As he said: “If it weren’t for Jess, I would be smoking cigarettes and who knows what else by now.”

As part of his journey remembering the post-accident time period, he never hid the fears he had once he woke up in a bed hospital with only one leg. He accepted the wheel chair option “just to go with the flow, as it seemed the best option to have back then”.

“Soon after that I discovered that wheel chair is not an option in Egypt,” Yassin said. “Nowhere provides access for a wheelchair; you can’t walk in the streets, ride on buses or even take the metro. Everything in Egypt is only designed for those who walk.”

Yassin added: “When you’re sitting in a wheelchair, every simple thing to do in Egypt reminds you of how helpless you are.”

After experiencing the limiting experience of fulltime dependency on others whilst using the wheel chair, Yassin came to the decision of walking again.

“It seemed the only way of keeping going with my life and going back to biking, I wasn’t trying to be better than anyone. I was just trying to keep my life as normal as possible. And normal means walking,” he said. “People kept on telling me I can’t do it and it’s impossible, while there wasn’t a one single moment I thought it is.”

In taking the steps to return to what he finds normal life, he underwent multiple surgeries in Egypt and Germany. One of the many challenges he faced included using a prosthetic limb in Egypt, that he soon discovered was unusable.

“After spending so much money, effort and time on it, doctors in Germany told me that people stopped using such prosthesis 30 years ago due to its harm on the body,” Yassin said. “So, I had to put another one on in Germany.”

After six years of surgery and physiotherapy, weakness has never found a space to live in Yassin’s heart, and he admitted he never gave up: “There was nothing I tried to do in my entire life and failed at, I might not succeed at the first time, but eventually I surely do.”

After he returned to walking again, there was no impossible in Yassin’s life dictionary.

“I went back to practice everything I love and biking was the first thing,” he continued. “It’s like travelling, no matter how long someone’s gone, he always goes back home. My bicycle is my home”

The fear of his parents and their overprotection never stopped him from training and keeping going with his passion, Yassin enthusiastically adding: “No one can ever imagine the happiness I feel while riding Jess. It’s indescribable, it’s a lifestyle.”

“Bicycles don’t demand much and don’t need much, yet they give too much. The beauty of the city can’t be seen while someone’s riding a car or a bus, but it definitely can be felt while riding bicycles,” Yassin said.

Yassin saw his school trip to Ain Sokhna is the best chance to prove to himself he’s just like others and can practice his passion.

“My parents were worried, but none of them could have said no, this was my chance of being normal just like any other kid, and I took it,” he said.

“Even though it took me seven hours as I was driving slowly, I did it,” he concluded. “And this is only the beginning.”