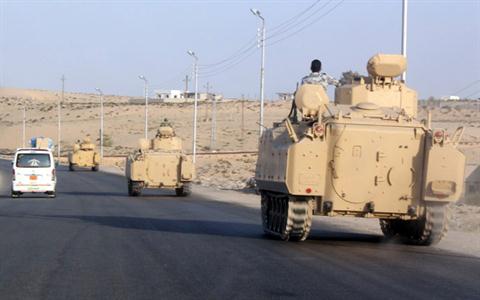 Two Egyptian policemen were injured by a mortar attack in Al-Arish on Monday, the Ministry of Interior told Daily News Egypt.

The mortar struck the entrance of an apartment block in the North Sinai region’s capital.

The ministry spokesperson denied the Reuters’ report that four were injured, stating that only two personnel were wounded and taken to hospital. Other reports said the blast significantly damaged four surrounding buildings, and that the targeted area is mainly home to police personnel.

The explosion comes a day after an army sergeant was killed while attending to a bomb in North Sinai. Mohammed Mustafa Mahmoud Harbi was attempting to defuse the IED in Sheikh Zuweid, with a statement from the armed forces’ spokesperson Mohammed Samir expressing the military’s “sincere condolences to the family of the martyr”. An officer and soldier were also wounded during the operation and subsequently transferred to a military hospital.

On Friday, a large operation in the region resulted in the death of a “terrorist” during an exchange of gunfire in Sheikh Zuweid and another suspected terrorist was killed in Al-Arish. Samir said in a statement that army forces also arrested 30 suspects, and destroyed 13 unlicensed vehicles “used in carrying out terrorist operations”.

Between 24 and 26 December, 297 people, the majority of whom were believed to have illegally entered Egypt, were arrested during military raids in the Sinai Peninsula according to security force statements. Days later, Abdel Fattah Harhour, the North Sinai governor announced an increase of the buffer zone along the Gaza border to a 5km width, a dramatic increase from the original 500 metres secured area planned.

Security forces across Egypt have been fighting a jihadist insurgency that has significantly spiked following the ouster of Islamist president Mohammed Morsi in 2013 by the military.

Since then hundreds of police and military personnel have been killed, with most violence occurring in North Sinai and claimed by Islamic State inspired militant group ‘State of Sinai’, formerly known as Ansar Beit Al-Maqdis.

An end of year report by the Egyptian Initiative for Personal Rights (EIPR) acknowledged the need to fight militant groups in Egypt. It stated, however, that current policies excessively crackdown on freedoms and abuse rights, which “fails to counter terrorism and even indirectly fuels it as thousands of people lose faith in state institutions and take the law into their own hands”.