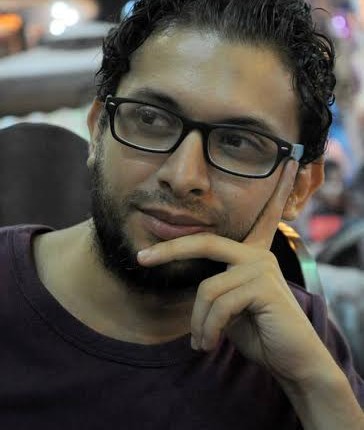 “God provides each of us with a defensive way to protect him in times of need, there are no victims, but our misuse of what God has given us is what makes us real victims” – with this motto, novelist Amr El-Gendy decided to use writing, which he sees as god’s unique gift to him, as a defensive mean to face all the troubles and hardships life throws on his shoulders everyday. When silence takes over during the early dawn hours, he resorts to his office where he starts turning the confused ideas that overcrowd his mind into clear words, adding one or more chapters to the novel he’s writing.

In 2010, his first collection of short stories “For the Sake of Devil” was released on the Egyptian book markets attracting people’s attention to a young author with innovative thoughts and a unique writing style. After less than a year, the 31-year-old writer published his first novel “Foga” followed by another novel called “9 Milli”, creating a remarkable switch from the psychological horror theme to the crime literature genre.

In 2013, El-Gendy introduced a new style in his psychodrama novel “313” hitting a new record on the young writer’s market. Getting back to the short stories, he released his second short story collection called “Strangers” presenting a group of strange and unknown psychological and mental disorders. A few weeks ago, his last novel “Msya” was released, raising questions about its mysterious name.

In his interview with Daily News Egypt, El-Gendy replies to all the raising criticism about his previous literary works. He talks about his last novel, revealing its secrets and provides some exclusive information about his future novels and projects.

When did you start writing? And how did you develop your talent?

Writing dominated my world since I was a little child. I won first  prize in the Republican Short Story Competition when I was in fifth grade in my primary school. I used to participate in poetry competitions as well, but I stopped writing after a while because I wanted to concentrate more on my studies. I entered the business world and moved to live abroad where writing started to dominate my mind and soul again. So I decided to develop my talent by studying English literature online in Liverpool University in addition to studying philosophy and psychology in other universities.

From your own point of view, what makes your writing style different from other novelists who write within the same genres?

I depend on psychology, which isn’t very popular among Egyptian writers. I never write for the sake of writing or entertainment. There’s always an important issue that I try to shed lights on in every novel or short story I write. I’m always keen to study the characteristics and lives of the cases I introduce in my novels and sometimes I visit psychiatric clinics to see similar cases and spend more time with them. This allows me to get closer to them and understand their psychologies in a better way which help me turn the unique cases into a literary work.

How did the idea of your first collection of short did stories” For the Sake of Devil” come up to your mind? And what are the main difficulties and obstacles you faced while publishing it?

I believe that writers can never choose their ideas. However, ideas always choose their writers! So I never care about the sources of my ideas or ask from where the ideas came. I don’t care if the devil itself inspired me with them. However, the main difficulties I faced were associated with living abroad with no connections with any Egyptian publishing houses or writers. I spent a lot of time searching for someone who can help me until I found a publishing house that believed in my work but they were afraid of publishing it under this name at first. As the collection belongs to the psychological horror genre, I found the name very suitable and I insisted on it until the novel came to light in 2010.

Why did you decide to move from psychological horror to crime literature in your second and third novels “Foga” and “9 Milli”? And what were your preparations before writing them?

I’m interested in crime literature, as it requires taking logic into consideration while narrating the events. It also needs the writer to be intelligent to prevent his readers from feeling bored while reading the novel. I exerted a lot of effort while searching for the tiny details of the crimes, and I spent long hours thinking of the surrounding environment that will generate the events and the best ways of presenting such environment to the readers.

Presenting  psychodrama in your fourth novel “313” was faced with waves of criticism as many people accused you of taking the main theme from [American film] “Shutter Island” as well as using foreign names for characters and places.

The novels talks about an army officer who works as a doctor in the American army, and my main objective was describing and clarifying the psychological state the American army officers ended up with after the war and how it affected them significantly. However, the American movie’s events take place on an island where the main character suffers from solitude after his wife – who suffered from monomania – killed their children. Obviously, this has nothing to do with my novel.

What were your main objectives behind publishing such a novel? And how did you receive and respond to these kinds of criticism?

Psychodrama is a public genre that no one can monopolise, and it was presented dozens of times in many books and cinema screens in many countries around the world. So it’s normal for some readers to feel that it’s similar to any other novel or movie. I faced all the criticism with a big smile on my face as many people just love criticising to appear like philosophers!

In your fifth short story collection “The Strangers”, you introduced a group of mysterious psychological and mental disorders – how could you prepare for such innovative idea? And what are the main obstacles you faced?

It was an interesting journey within the complicated human mind. I had no obstacles as I studied all those disorders before and I could easily put them within a literary frame. The idea itself was so crazy and extraordinary as each short story can be turned into a long novel, however, I wanted to provide readers with information about some psychological disorders dozens of people in eastern societies suffer from but usually link them to demons because of literacy and ignorance.

What does the vague name of your last novel “Msya” mean? And what are the main ideas this literary work goes around?

Msya means “The Saviour” in the Jewish belief. Although the novel was so different from my previous work, it couldn’t escape away from the rapid rhythm of the crime literature and psychology. The main issue of the novel is doctrinal as I found out that the idea of the saviour dominates all people with their different religions and ideological affiliations. Muslims are waiting for “Al-Mahdy Al-Montazar”, Christians are waiting for the Christ to come back to life, while Jews wait for “Al-Mashih”.

The idea came up to my mind when I was reading about the Jewish legends. I started writing the story of a famous writer who found out that he will die soon so he decided to write a great literary work to immortalise his name. His dark past starts chasing him revealing a lot of surprises to the readers. He starts a journey from Sinai to Turkey, then goes to France, Italy and ends up in England tackling the real events and the secret documents that tells what happened after the crucifixion.

Why do you keep moving from a certain genre of literature to another through your novels? And how do you think this can enrich your writings?

I can’t stop my pen from writing anything or force it to write any particular thought. I always allow it to write whatever it wants whenever it wants. I believe the writer is just a mediator between his thoughts and his pen. Writing about psychology, crime, philosophy and ideology benefited me on large scales. It allowed me to attract large numbers of readers and experience various lives I could never experience otherwise.

Who are your favourite Arabic and foreign writers?

On the local level, I adore Naguib Mahfouz and consider him the saviour of the Arabic literature during the last century. In addition, I love Waciny Laredj and Taha Hussien so much. Internationally, I prefer to read for Leo Tolstoy, Vector Hugo, Fyodor Dostoyevsky, Charles Dickens, Dan Brown, Katie Raikes and many others.

What are your future projects or novels?

Currently, I’m turning my last Novel “Msya” into a scenario and I’m preparing for my next novel that will be published by the end of the year, God willing.

How do you see the future of crime novels and psychodrama in the Arab world, in general, and in the Egyptian book market, in particular?

I’m very optimistic! I think the nature and characteristics of the Egyptian readers have changed over the last five years as they became more aware of the good and bad work and more able to differentiate between them. I expect that psychodrama will occupy a greater space sooner or later.