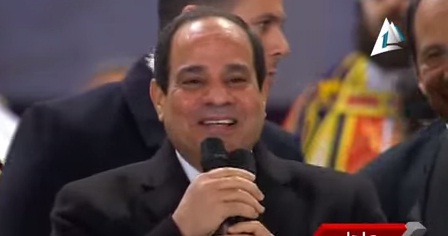 President Abdel Fattah Al-Sisi visited the Orthodox Cathedral in Abasseya Tuesday night during the Christmas mass, the first time an Egyptian head of state participated in a Christmas ceremony. Al-Sisi delivered his speech amid chants from the mass attendees.

Al-Sisi arrived to the cathedral several hours before midnight, interrupting the mass and giving a speech to the attendees. “It was necessary to come and tell you Merry Christmas!” he told the worshippers.

Officials have participated in masses before, though they have never interrupted the services or given any speeches. “It’s very important to tell the world during the ongoing circumstances that we are united Egyptians, without any classifications,” said Al-Sisi.

The speech witnessed a warm welcome, intense clapping, and chanting from the attendees, with some saying “We love you Al-Sisi!” and “One hand!” in the presence of Pope Tawadros II.

Responses to the president’s speech varied within the Christian community. Tony Sabry, a Coptic activist said: “It’s a very smart and nice gesture from Al-Sisi to get more Christians on his side.”

Yet, Sabry called the interruption of the mass “inappropriate”, and noted that “it never happened before”.

Maspero Youth Coalition, a group formed in 2011 following the Maspero attack, said that the president’s visit affirms the concept of citizenship in Egypt. However, the prayers should not be interrupted under any circumstances.

However, many other Christians expressed their joy with the visit on social media, denoting Al-Sisi was a guest who honoured their house, and the visit is a positive indication to the future of the country.

In Monday night statements, Pope Tawadros told state-run television: “President Al-Sisi is a person we all love and we see seriousness in him, as we works hard as a soldier and human being with a clear vision.”

He also added that the 30 June uprising was a move of union and victory for all Egyptians.

However, the Pope had said in November 2012: “The most important thing about masses is the discipline, attendance in the church is all about being disciplined; clapping in churches is banned.”That decision was made during Tawadros’s very first meeting with the Holy Council, after his appointment in November 2012. The national awareness committee for Copts issued a statement in May 2013 in support of the decision, saying the chants during prayers is disrespectful to the mass.

During the Christmas 2012 mass, the then-ruling Supreme Council of Armed Forces attended the mass in the cathedral. As soon as Pope Shenouda III welcomed them, loud chants were heard by the attendees, saying “down with the SCAF!”

The chants were triggered by an attack that took place several months earlier in front of state-run television Maspero. The Maspero demonstration, which followed several attacks on churches and which heavily featured Copts, was dispersed by military and police forces, leaving 28 dead and over 200 injured

Several attacks have targeted Coptic places of worship across Upper Egypt and North Sinai, in addition to the systematic abductions at the hands of extremists since 2011 to date.

Fady Youssef, head of the Egypt’s Copts Coalition, said: “Kidnappings of this kind have been taking place since the beginning of the revolution; with the families usually resorting to paying the ransom, as they do not find the security measures taken by the police efficient enough.”