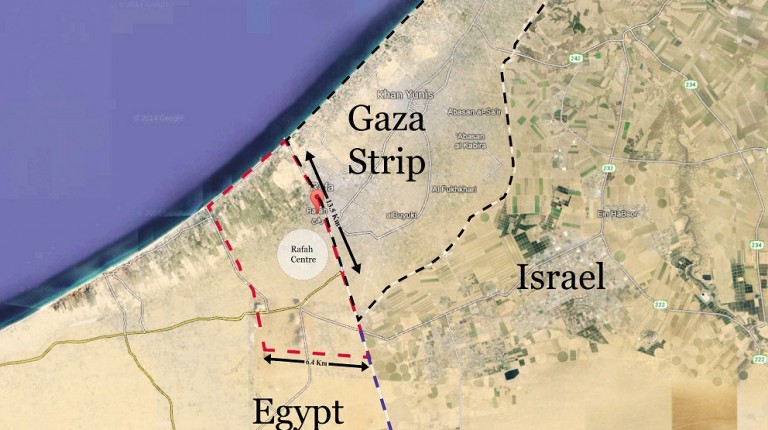 The compulsory evacuation of Rafah is set to enter its second phase on Thursday, according to North Sinai Governor Abdel Fattah Harhour.

Harhour told Daily News Egypt on Wednesday that bad weather conditions would be considered while carrying out the evacuation.

The Egyptian army began to establish a ‘secure zone’ along the Rafah border, after a suicide truck bomber and armed raid left at least 30 security personnel dead on 24 October.

Immediately after that attack, Egypt closed the Rafah-Gaza border. Days later the Egyptian armed forces announced it would establish a buffer zone to end all smuggling activity in underground tunnels connecting Rafah to the Gaza Strip.

President Abdel Fattah Al-Sisi has said “foreign hands” were behind the 24 October attack, an indirect reference to militants in the Gaza Strip.

The first phase of the buffer zone, with a width of 500 metres along the 13.5 kilometres long border with Gaza, began in October, with the evacuation of 1,156 families. The second phase is set to cover another 500 metres.

In October, Egypt’s cabinet issued a decree defining the buffer zone, marking it with coordinates and a map illustrating the borders of the zone.

The coordinates mentioned in the cabinet’s decree include a point north of Gouz Abu Raad village, 6.4km from the border line and the furthest point from the border line. A point has also been placed at Abu Shanar village, where the buffer zone meets the Mediterranean. The cabinet decree includes a map, though it lacked some elements, including the location of the Gaza Strip border with Israel.

The final buffer zone area is illustrated in the map above, using the official coordinates.

Harhour told Daily News Egypt earlier this month that the buffer zone will eventually reach 5km, with third and fourth phases of demolitions expected to take place in the near future.

The governor confirmed Wednesday, though, that there is no date yet set for the next phases of the buffer zone.

“That needs a dialogue with residents and there is of course the vision of the armed forces and executive authorities,” he said.

An emergency compensation of EGP 1,500 will be given to each family evacuated from the second phase area, in addition to the basic compensation, according to the governor.

A survey committee from Rafah city authorities identified 1,220 houses, inhabited by 2,044 families, which will be evacuated in the second phase.

According to the geographic coordinates of the final plan, however, the number of families to be evacuated will be much larger. This is given that the area includes the most heavily populated parts of the town.

Muhannad Sabry, a researcher and journalist specialising in Sinai and its security issues, told Daily News Egypt that the way Egyptian authorities are dealing with the buffer zone issue lacks transparency.

Sabry said that in 2008, Egypt, with some help from the US, tried to build a “preventive wall” on the borders with Gaza but that plan failed. He added that after the 2008 Israel-Gaza war Egypt tried again to establish a buffer zone of around 150 metres width, but that plan was not completed either.

“Sinai residents don’t have problems with relocation but they need to know where they will be relocated,” said Sabry.

He added that some of the people whose houses were evacuated in the first phase of the buffer zone moved to houses in the second phase area asserting that the lack of transparency is a “belittlement” to the residents.

Rafah is a border town of 14 districts and 11 villages, with an estimated population of 75,000, according to the city’s official website.

The town is located inside the coordinates the government is establishing and the evacuation will likely be the end of Rafah city.

Harhour said late in December that a “new Rafah city will be established behind the buffer zone to resettle residents” and added that it will have all infrastructure needed.

Sabry said evacuation plans should take into consideration people who live in the area and the social impact on schooling. He added that people who were evacuated during the first phase still do not know whether their sons and daughters will be able to take their upcoming midterm exams.

He also stated that establishing a buffer zone needs “know how” knowledge about controlling the evacuated area as “there are empty areas in Sinai which the army can’t control.”

The journalist warned of the “societal consequences” that may follow the evacuation.