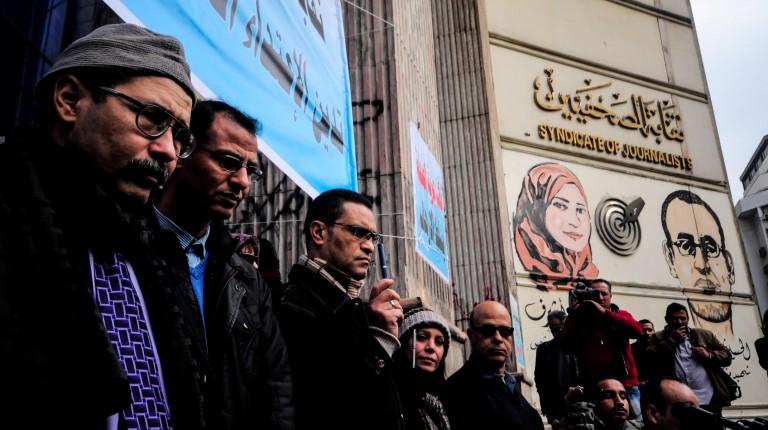 Those in attendance included print and broadcast staff from local and international news organisations, including private outlets such as Al-Masry Al-Youm.

Holding pens and ‘Je Suis Charlie’ signs aloft, the journalists stood under a banner that read in Arabic: “The Press Syndicate and all Egyptian syndicates condemn the assault on journalists and terrorism in all its forms.”

Last Wednesday, armed gunmen stormed into the Paris offices of Charlie Hebdo, killing 12, including the paper’s editor-in-chief and two policemen, in an apparent response to a string of negative depictions of Islam and the Prophet Mohammed published by the satirical weekly.

In the following days, the suspects’ chase was followed by more terrorist violence around Paris, including the killing of hostages in a kosher supermarket by another militant.

The attacks, which Amnesty International called a “chilling assault on freedom of expression”, met with international outcry from world leaders and media.

Nour al-Hoda Zaki, a prominent member of the Press Syndicate and an ex-editor of the Nasserist-leaning newspaper Al-Araby Al-Nassery told Daily News Egypt: “We are here today to announce our solidarity with all of France’s media from the attacked journalists at Charlie Hebdo to bloggers at home in light of this criminal terrorist attack.”

“We must give solidarity with any media even if we disagree with their content,” Zaki said. “Yes, we must protect the rights of religious believers but our focus should always be on civilian laws.”

Many of the conversations between demonstrators inevitably turned to local politics, and for Zaki the Hebdo events are not without precedent in Egypt. “What happened in France is the same as what happened here during the era of the Muslim Brotherhood. When we overthrew the Morsi government Western journalists called it a coup, but we suffered from terrorism too. We hope now that those journalists will see we have both suffered from terrorist strategies that tried to divide us.”

Upstairs in the glass and tiled lobby of the syndicate’s executives’ offices, Vice Secretary Gamal Fahmy echoed Zaki’s comments about the Brotherhood days. He told Daily News Egypt: “I think most Egyptian people recognised what happened in France for what it is because they suffered from the same issues here before 30 June. The Egyptian media gave good coverage of Charlie Hebdo and warned against the dangers of this kind of terrorism on freedom of expression. We have a Muslim society, but can support tolerance and a free press.”

However, when questioned on where that leaves the journalists imprisoned in Egypt under the rule of president Abdel Fattah Al-Sisi, Zaki responded that “Egypt and France are completely different situations. We have a different culture, different economy and so on. We support France according to their laws and situation, but the countries are not comparable.”

A broadcast journalist amongst the throng, who asked not to be named, was less sympathetic to the current assaults on free press in Egypt. Asked whether it was hypocritical for President Al-Sisi to ring his French counter-part Francois Hollande to condemn the attacks while he cracks down on freedom of expression, the journalist replied: “Hypocritical is not the right word, it is more like confusion. Al-Sisi does not know what freedom of expression is; his only understanding is security.”

“Al-Sisi probably thinks that the situations are not comparable, that there are no violations of freedom happening in Egypt as the circumstances are exceptional. Personally, for me this is a logical fallacy.”

Meanwhile on Sunday, world leaders attended a march of three million in Paris calling for unity and reaffirming the right to freedom of expression in the wake of the Charlie Hebdo attacks.

But French campaigning NGO Reporters Without Borders (RWB) lambasted the presence of delegates from certain states known for attacking and suppressing the media.

“We must demonstrate our solidarity with Charlie Hebdo without forgetting all the world’s other Charlies,” Reporters Without Borders secretary-general Christophe Deloire said.

“It would be unacceptable if representatives of countries that silence journalists were to take advantage of the current outpouring of emotion to try to improve their international image and then continue their repressive policies when they return home. We must not let predators of press freedom spit on the graves of Charlie Hebdo,” Deloire continued.

Mentioning by name Egyptian foreign minister Sameh Shoukry, the NGO stated: “Reporters Without Borders is appalled by the presence of leaders from countries where journalists and bloggers are systematically persecuted, such as Egypt (which is ranked 159th out of 180 countries in RWB’s press freedom index), Russia (148th), Turkey (154th) and United Arab Emirates (118th).”

In December, RWB ranked Egypt as the second country in the world for the number of journalists arrested and the world’s fourth “biggest prison” for journalists, in its annual roundup on abuses of press freedom.

Though figures are hard to obtain, Egyptian rights groups estimate that thousands have been arrested under the controversial Protest Law that was introduced in November 2013, which effectively criminalises demonstrating; a severe attack on public freedom of expression.

Back in Cairo, some journalists pointed out that the message of the Syndicate-erected banner written in French called for liberty of the press, whilst the larger banner in Arabic decried terrorism; suggesting that Egypt’s media establishment recognises different priorities in the two countries.

Equally, when pushed, Vice Secretary Fahmy was not keen on calling for unbridled journalistic expression in Egypt. “It’s a long route. We gained many things after 25 January for the freedom of the press, but we still have many things to do. We don’t want to have complete freedom now, we will establish it in time. If the society moves towards democracy, then this will be reflected in the press; the press is part of the community. If we don’t achieve democracy, then we won’t achieve a free press.”

Despite the Vice Secretary’s timid vision for the role of media in scrutinising the government, nevertheless, some attendees spoke optimistically about its future in a country that has suppressed dissenting opinions since the overthrow of the British yoke in the 1950s.

Marwa Omara, fiancée of imprisoned Al Jazeera journalist Mohamed Fahmy, told Daily News Egypt that she did not think it hypocritical of the Egyptian government to be speaking out on Charlie Hebdo: “We believe that the president has good intentions to fix everything. I hope the mistake of putting journalists in prison and silencing them will be fixed; it is unacceptable in any nation.

“We believe the president wants to get rid of the case and are hopeful that it will end soon. Mohamed has been in prison for a whole year, a whole year of suffering for being a journalist, suffering from a broken shoulder and hepatitis C, this is not a punishment for Mohamed only, it is a punishment for me and his family. It has to end; it is essential for freedom of expression.

“It is an unintentional mistake, Mohamed and his colleagues did nothing, they are pawns in a political war between Egypt and Qatar. They should not pay the price for any political war or agenda.”

Omara continued that Fahmy’s lawyer Amal Clooney has submitted documentation for deportation to Canadian authorities, which has been accepted, and the Canadian government is now working closely with Egypt on the process of deportation.

Holding up to cameras a paper with “#JeSuisCharlie #FreeAJ3” and “War on terror, has partially become a war on journalists – Fahmy”, Omara continued that she sees the attacks in France as no different to the imprisonment of her fiancé.

“I’m speaking on behalf of jailed journalist Mohamed Fahmy. I’m here because he couldn’t be with us. We are condemning what happened in Charlie Hebdo. We are totally against this attack on freedom of expression, which is the same cause that we have. We believe that freedom of expression is part of any democratic country and you cannot silence journalists by killing them or putting them in jail.”

“Journalists are not enemies to any governments; they are allies in the war against terrorism.”