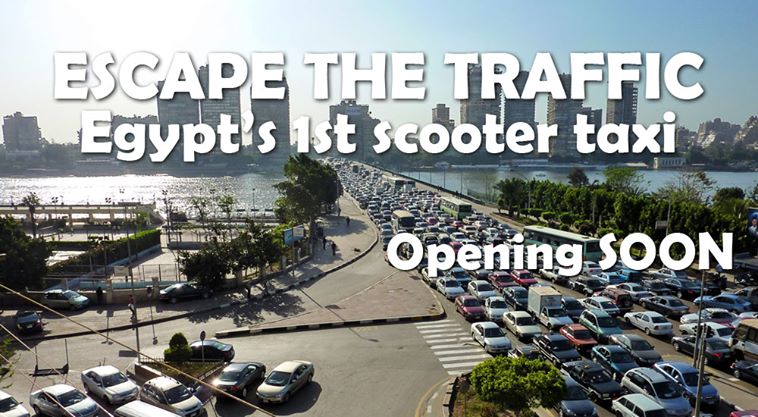 Ask anyone about the main crisis you find in Egypt on a daily basis, and traffic jams would come at the top of the list, if not the first. To be living in Cairo, several hours of your day would definitely be lost stuck in what seems to be an endless street waiting for the cars to start moving forward or even for a traffic light to turn green, helping the massive number of vehicles cross town.

The traffic jam is one of the worst problems in Egypt that seems to have had no solution until now, and any person would regret a decision as simple as taking a cab in the rush hour – the time it takes might be longer than simply walking down the street to the target destination.

But what if the cab is not a car but a scooter?

“El-Makana Taxi” (The Scooter Taxi) is a new start-up project using scooters as taxis as a way of saving time. The application provides users with the ability to order a scooter to move from one place to another instead of a traditional taxi.

“We were fed up with traffic, non-moving streets and wasted hours in the city, so we started thinking to import the idea that we saw in foreign countries inside Egypt,” said Hussein Sons, one of the founders. “The idea of scooter taxis is widely spread in applied in lots of African countries and some European countries, as it have several advantages in a densely populated country”
Taking a scooter instead of a regular taxi has a lot of advantages in Hussein’s view: “The time taken in the ride is a quarter of the one taken in a taxi, as there is always enough space in the street for a scooter to pass by unlike a taxi, it would definitely reduce the amount of fuel used and the amount of money paid more than halves as well.” 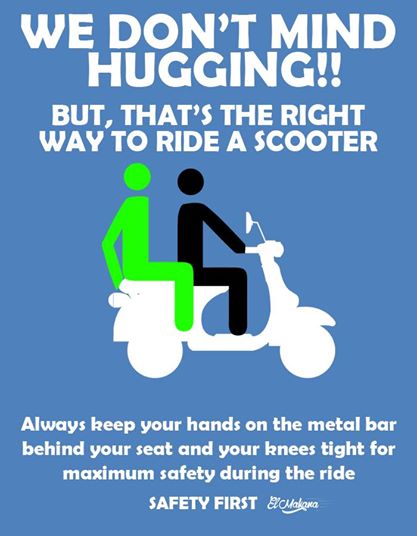 Also, scooters are environmentally friendly – the fact that they don’t use large amount of fuel means they produce less carbon dioxide and would not pollute the air as much as taxis.

The project, which will be launched soon, provides a specific amount of money for moving between certain places, and the users would be pre-noticed with the price along with all the personal information of the driver responsible for the ride. Users are also provided with the licence number of the scooter they are taking.

Moreover, providing female drivers for girls not comfortable riding with male drivers is on the list.

“We understand the concerns that people in a conservative society like Egypt might not accept for a female to ride with a male on a scooter,” Hussein said.

As for the social concerns that might face them, Hussein described the procedures they took to calm people’s worries.

“The masses think the scooter is more dangerous than the usual way of transportation due to its speed, but actually it’s safer than them because it rides on certain lanes of the street so it’s less likely to have accidents,” he said.

Providing as much safety as possible was the biggest concern of the three owners. 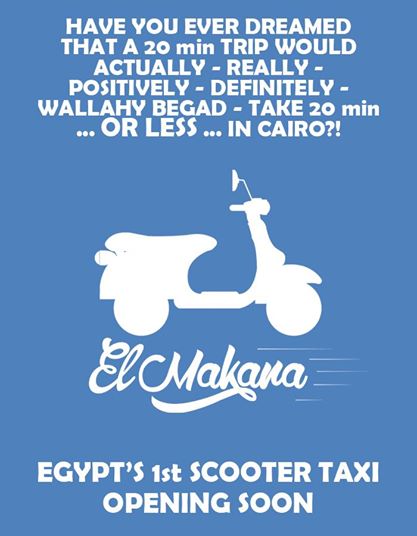 “That’s why we make sure that the driver is well trained and qualified enough in specific courses we provide them with so as not to risk his life or the rider’s,” Hussein assured, “as well as providing both driver and rider helmets to wear.”

The scooters in use are also designed not to cross the speed of 60 KM/H, according to Hussein.

The project is self-funded and took over a year of intensive work to do all the market research, importing the scooters, training of the drivers and meeting safety requirements.

The scooter taxis concept will start the pilot phase in the Zamalek, Maadi and Al-Agouza neighbourhoods as a way of applying the project practically to find out people’s feedback.

“Everything is done and we’re just waiting for the permission of the Ministry of Transport,” Hussein showed his concern saying that “the scooters have to be licensed as rentable [vehicles] while law states that they can only be licensed as privately owned ones .”

He added that otherwise it would be illegal for people to ride the scooters as taxi, and that needs permission from the minister himself.

“We just want to help people and find alternative ways of solving the problems we have, isn’t that what President Al-Sisi asked for in the beginning!” Hussein said.

Even though the scooter only provides transporting one person from a certain place to another, it’s still a way of reducing the traffic.