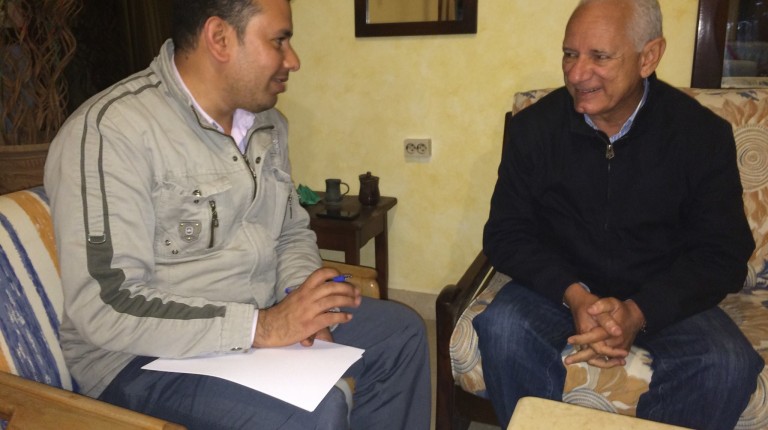 Safari trips in the mountains and deserts of Sinai are considered a unique tourism product that sets apart the region from other competing areas. However, the restive region suffers from the complexity of heightened security measures and exaggerated fees, according to Abanoub Travel Chairman Rabie Tawfik.

“Over the past four years, safari tourism has been highly affected due to a decline in tourist arrivals and stalled activity,’’ Tawfik said in an interview with Daily News Egypt.

Tawfik requested that all state agencies help tourism companies revive their activities by removing all obstacles and restrictions imposed.

Why did you choose to work in safari tourism?

In 1983, I came to Sinai to visit a relative while I was a medical student at Assiut University. I came back to Sinai upon graduation in 1984, the region’s nature and spirituality attracted me.

I did not know that the region would push me to leave the medical profession. I love the quiet nature and am naturally inclined to stay clear of concrete blocks. I loved working in safari tourism in Sinai in particular and all over Egypt in general.

I was able to break the monopoly of Israeli companies over safari tourism in the Sinai, and cooperated directly with global companies.

How were you able to break the monopoly of Israeli companies on safari tourism in Sinai?

I would like to first tell you that I am proud of what I achieved during the time I worked in tourism, as well as my friendly relationship with the Bedouins in the region. As for how I managed to attract foreign companies to deal with directly, I learned everything related to safari tourism from studying the environment and history of each area I organise safaris to.

When Israeli companies knew about this, they made complaints with security agencies who had previously dealt with me but who understood my position. That was a good thing.

I was able to offer the same quality of services provided by foreign companies operating in safari tourism in the Sinai. I designed brochures, marketed programmes, and participated in international conferences on this type of tourism.

Throughout my work at the beginning, I realised that if you want to be successful you need to examine all the elements of your work, as well as strengths and weaknesses, and pay attention to learning and benefitting from others.

How did the Bedouins treat you in the beginning?

When I first went to Sinai and stayed in the desert for five nights, one of them asked me whether I was Egyptian or Muslim. In good faith, I said I was Egyptian. Two years later I discovered that the word Egyptian here means Christian!

The Bedouin feel they are distant from Egypt, and this is very true as a result of their being marginalised for decades. Current generations of Bedouin are very distinct from our generation and their forefathers.

The Bedouins understand the importance of tourism as a source of income. They work as guides for trips in the mountains and gain income from the tourists.

Bedouins don’t like working in hotels, as this is contrary to the psyche under which they are raised. However, they don’t mind working as guides for safari trips in the mountains.

Daily News Egypt recently reported on security disturbances in the Sinai. How does this affect safari tourism?

These disturbances take place in the north, and unfortunately, the media does not distinguish between North and South Sinai. We have a custom that almost resembles a law – a Bedouin does not stand in the way of another Bedouin who earns money from a trip.

Do safari tourists differ from other tourists?

Of course, safari tourists have different interests than other types of tourists, such as those who want to visit beaches or cultural sites. Safari tourists are looking for meditation, quiet, and new cultures, as Sinai is not just desert.

Average tourist spending on safari trips exceeds $70 per night, and is considered one of the best spending patterns. The safari trip costs less for the company compared to a hotel where energy consumption is high and the entire process is labour-intensive. Frequency rates average two visits per year for safari tourists, while others visit the region only every four years.

What are the most important areas frequented by safari tourists in Sinai?

Mount Sinai, Saint Catherine, and Mount Ragaa, which are located between Nuweiba and Saint Catherine, as well as Ain Khadra and the Nawamees region, include some of the most important locations safari tourists visit.

Ain Khadra was mentioned in the Torah and was one of the sites in which the Israelites rested during the exodus. It was also a stop for Christian pilgrims on the way to Jerusalem in the 4th Century CE.

The Nawamees area once housed the trading tribes of the Nile Valley. Sinai is a place that combines the history of three different religions over past centuries.

Safari companies complain about complex procedures for security clearances. Is there truth to this complaint?

This is a big problem and we cannot ignore it. You have to get approvals a month before the group arrives, and you must go to Cairo to do so.

Sometimes it happens that the group is arriving tomorrow and you still don’t have clearance or were rejected. We want the approvals to be acquired through establishing security agency offices in Nuweiba to make it easier on tourism companies.

In addition to these complications, an EGP 105 toll fee is charged on each person crossing from Taba, but the proceeds do not go toward the governorate. Another EGP 100 is charged by ports security for busses coming from Eilat and Aqaba.

Tourism police requests EGP 100 per bus for tourism police security clearance and the protectorate charges $5 per person. This is not the problem – the problem is that we don’t receive services in exchange for the money paid!

For example, security forces tasked with securing travel groups exert a great deal of effort in working with tourism companies, and they do not take any fees from us!

Environmental experts warn that protectors may be degraded due to safari tours. How would you respond to this?

Protectorates in Sinai are a wealth that must be preserved under all circumstances. Quad-bikes should not be allowed in the mountains because they destroy the desert environment. Safari trips on the other hand require SUVs that drive on well-known paths and roads. In fact, several unqualified companies operate safari trips, and this is a big issue.

Protectorates in Sinai are not just limited to desert but also extend to coral reefs, which are currently being destroyed in various areas, especially in Dahab and Ras Mohammed. The biggest problems are pollution and diving paths that are not up to international standards, and eventually there will no longer be coral reefs in the Gulf of Aqaba. This is a disaster by any standard on tourism in Egypt.

What do you ask of the Ministry of Tourism?

To be honest, it is not the Ministry of Tourism alone, but the entirety of the state via various ministries. The Sinai is very rich – like a missing treasure in the sand that is yet to be taken advantage of. We have to work to take advantage of it.