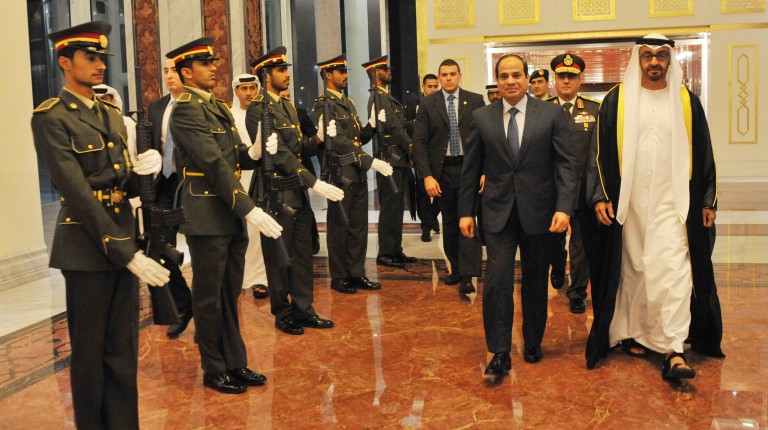 Al-Sisi’s visits to the UAE comes ahead of the Sharm El-Sheikh Economic Summit, which will be held in March to support Egypt’s economic development

“This visit holds great importance,” said Yomna Hamaqy, a professor of economics at Ain Shams University. Hamaqy believes that Al-Sisi’s participation in the Abu Dhabi summit will help Egypt benefit from the Emirati experience in the field of new and renewable energy, and at the same time will offer the president an opportunity to meet with major global companies operating in the field.

WFES is one of the Middle East’s largest gatherings on the future of energy. More than 30,000 leaders in government, industry, technology, and finance are expected to attend the event, which is scheduled to run between 19 and 22 January, according to the WFES website.

According to an economic report issued by the Emirati Embassy, the UAE has allocated more than $10bn in development aid to Egypt in 2014. A total of $1.5bn was allocated to build 50,000 housing units and 100 schools, renovate and build 25 silos with a capacity of 1.5 million tonnes, and provide electricity generated from solar power to 62,000 homes.

Alongside the UAE, Saudi Arabia and Kuwait became some of the biggest supporters of the Egyptian economy after the ouster of President Mohamed Morsi in July 2013.

Hamaqy explained that one of the main challenges facing Egypt is that the investment law remains under fire for its alleged lack of vision. Investment Minister Ashraf Salman announced in press statements that the government will complete the unified investment law before March.

“We will work to solve investors’ problems and eliminate bureaucracy,” Al-Sisi said in relation to the law.

According to Finance Minister Hany Kadry Dimian, Egypt obtained support from the three countries worth EGP 95bn, most of which was in-kind petroleum assistance.

The price of oil dropped in global markets to less than $47 per barrel this week, according to former Vice President of the Egyptian General Petroleum Authority (EGPC) Medhat Youssef, who feels that this will affect Gulf support, especially the UAE’s support, to Egypt in the near future.

“Relations between Egypt and the UAE do not have to be limited to receiving aid, as political relations are strong,” Youssef said.

President Al-Sisi’s visit is a positive message for investors in the new and renewable energy sector, according to former Vice President of the Egyptian Gas Holding Company (EGAS) Hamed Qarqar.

Qarqar feels that the UAE has injected a high volume of investments, in addition to petroleum aid to Egypt in recent times.

Egypt is currently suffering the effects of increasing electrical loads due to a growth in private power consumption in the summer months, and as a result the Ministry of Electricity aims to generate an additional 3600 MW of electricity next summer.

Ezz El-Arab believes that a complete reconciliation process will only take place if Qatar changes its media policy and ends its support for the Muslim Brotherhood.

He added that Al-Thani should also put an end to what he referred to as the “Turkish-Qatari coalition” that “threatens Egyptian national security”.

Al-Sisi’s participation in the Abu Dhabi summit represents his first trip to UAE as president of Egypt. Upon his arrival on Sunday, he was received at the Presidential Flight Airport by the crown prince. Later in the day, he attended official welcome ceremony in Al Mushrif Palace in Abu Dhabi. Al-Sisi is expected to deliver a speech at the WFES 2015, at the invitation of the crown prince.