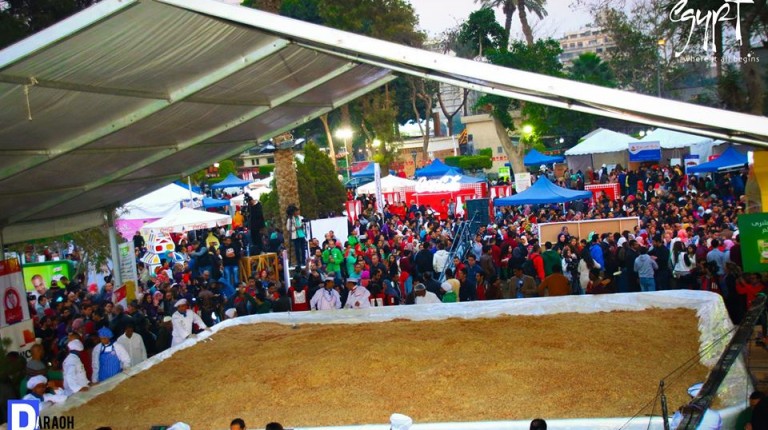 Colours of the rainbow filling in the roads around the park, the sound of some people’s laughing while they’re impatiently anticipating the unveiling of the huge plate everyone is waiting for. Others are looking between the varieties of restaurant booths to decide what they’re going to eat, and all trying to resist the mouth tasty smell of koshary.

When Egypt tried to get in the Guinness Book of Records, it wasn’t through a new invention or even beating an old one. It was, instead, by making the world biggest plate of koshary at the Koshary Festival.

Koshary is a traditional Egyptian dish dating to the 19th century in which rice, pasta and lentils are mixed together in one plate with a topping of spicey tomato sauce and some crispy fried onions.

With a huge plate of koshary measuring 10 metres long and in width and of 1.2 metres in height, the plate weighed 7  tonnes, or about 7,000 kg. About 6,000 attendees turned up to the festival, earning it a place in the world record books.

The festival was about launching a new food mobile application called “Engezni”, where people can review food or even order online.

“We wanted to launch the application in a remarkable way, a way that leaves people connected to it,” said Ahmed El-Shenawy, co-founder of “Engezni”. “What’s a better way than entering the Guinness World record with a meal that has a unique print in every Egyptian home.”

The application, which is the work of five American University in Cairo (AUC) students, won the second best mobile application at the University Mobile Challenge, am annual competition part of the Mobile World Congress, the largest international conference and exhibition for mobile technology.

It launched on Saturday on Google play, Android online store, and will soon be launched on Apple’s IOS online appstore.

Earlier this year, its Facebook page reached over 100,00 loyal followers, in which they share everything about food and restaurants in Egypt.

“It’s not just a mobile application, it’s a food social network, where people get to communicate and talk about everything related to food,” said El-Menshawy. “It starts with the taste, quality and prizes of a certain restaurant and even covers online ordering.”

“This is one of the biggest gatherings of people sharing common interests, it’s a good opportunity for us to market our work and brand,” said Mahmoud Moustafa, co-founder of Bubblzz Startup , a natural handmade cosmetics  brand. “We attended several bazaars and exhibitions and this festival is a great opportunity to directly communicate with as much people as possible.”

The festival started at 11am and lasted till 11pm, ending with a fireworks show and a concert by the Cairookee Band as a celebration of accomplishing the mission.

After distributing the koshary to attendees, The Food Bank took the remaining koshary to distribute to those in need – which ended in up to 8,000 koshary boxes being distributed.

“Koshary is one of the things that makes Egypt unique, so having an event like this would prettify the image of Egypt outside the country,” said Amaa’ Samir, one of the attendees, “tourists always come to try koshary in Egypt, it’s one of the things we know how to do the best.”

Moreover, Nagham Allam finds that having the biggest koshary plate is not only for the Guinness Book of World Records. She sees that it is not just a food, it’s more likely a state of mind and emotion, as “koshary is the one meal the people adore in Egypt” she says with a wide smile.

“It’s a part of the process of our growing up; it’s always connected to family gatherings and happiness. No one eats a plate of koshary by himself in Egypt, it is a remarkable sign for people to gather around it while eating,” she added.

On the other hand, a lot of attendees showed disappointment at the lack of organisation and what many called a waste of money.

After getting in an hour and a half past the scheduled time, they faced the fact that there were no places to sit during the whole event, with the food also sold well over the price it was originally sold at in outside restaurants.

Moreover, there was no one to ask about more details or information about the delay or whether the service equals the price they paid for the tickets, which were sold at EGP 70.

“Even though the idea was originally great, the event was a pure disaster,” said Mohammed Nassar, one of the attendees, “The place was left like a dumpster due to lack of trash baskets and the band was two hours late and no one explained the reason behind.”

Nassar added that even the process of distribution the koshary to the attendees needed more organising, continuing: “The event is for encouraging food tourism; it could have been better selling just Egyptian oriental food instead of all kinds of western food.”