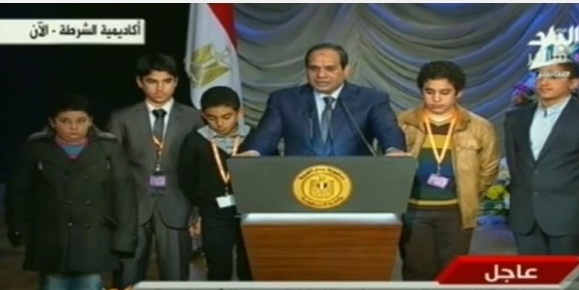 Al-Sisi honoured the families of 41 deceased policemen who were killed in action.

He also stated that 208 “terrorists” were killed in confrontations with security forces, while another 955 were arrested, adding that half of them were released after proven innocent.

He did not add any further details on the killings.

The president added that security forces could have annihilated suspects of terrorism while being arrested. However, he explained, that “we are in a country that respects the law”.

This, he added, is to prove that “we are concerned with the rule of law, and are not targeting or arresting innocent civilians”.

Since the 3 July 2013 military-backed ouster of former president Mohamed Morsi, Egypt has faced a rising militant insurgency in the Sinai Peninsula, mainly targeting security officials. Such attacks have prompted a heavy military presence within the peninsula. The official page of the army spokesperson frequently posts reports of alleged terrorists either being killed or arrested by the security forces.

The reports by state media and the army are the sole sources confirming the number of deaths, amid a lack of independent media coverage.

Al-Sisi asserted in his speech that he is not against human rights, but “we must consider the condition of the country”. He also added that freedoms should not be limited to the demands of one person or one protest, while asserting that he is not against protesting but is concerned about its “economic effects”.

The controversial Protest Law issued by former president Adly Mansour in November 2013, requires organisers of any public assembly – whether it is a protest, march, or general meeting – to submit a written notice to the nearest police station with their plans at least three working days in advance. It also gives police officials the authority to cancel, postpone or change the route of a protest, should they acquire “serious information or evidence that the assembly would threaten national peace and security”.

Though numbers vary, most human rights organisations concede that thousands of protesters, activists, and students have been detained on charges of illegal protesting.

“Egypt has warned the world of the consequences of terrorism, and called upon the international community to counter this danger which threatens all the world now,” Al-Sisi added.

Minister of Interior Mohamed Ibrahim also spoke at the event and congratulated the police personnel, praising their sacrifices.
He added that the ministry was involved in a violent struggle against terrorism, where policemen exerted a lot of effort to “abort terrorist operations”.

Ibrahim praised the latest cooperation between the army and police forces, noting that “we are not now facing a local terrorism”. He added that there are international forces that are supporting this “terrorism”, not only financially but also logistically.

Ibrahim’s speech was followed by the screening of a short documentary “highlighting the achievements of policemen since the 25 January Revolution”. The video pointed out the numbers of arrests and footage of different security operations.

The celebrations commemorated the incident in 25 January 1952, where Egyptian security forces in the city of Ismailia clashed with British forces during guerrilla confrontations between the Egyptian resistance and British forces.

The commemoration of the clashes, which resulted in the death of 50 Egyptian police officers, became a national holiday in 2009, under the rule of former president Hosni Mubarak.

On the same day, Egypt is celebrating the fourth anniversary of the 25 January Revolution, when demonstrators took to the streets protesting corruption and police brutality, leading to the full retreat of security forces and the ouster of former president Mubarak.

Scores of protesters and civilians have been killed in confrontations with police personnel, either in front of police stations or in public squares. On 29 November 2014, a Cairo court dismissed charges of killing protests faced by Mubarak and his interior minister Habib Al-Adly.

The majority of police officers charged with killing protesters were acquitted, or had their charges dismissed, mainly based of the “self defence” argument.

One of the symbols of the protests was a young man from Alexandria named Khaled Said, who was allegedly beaten to death by two police officers.