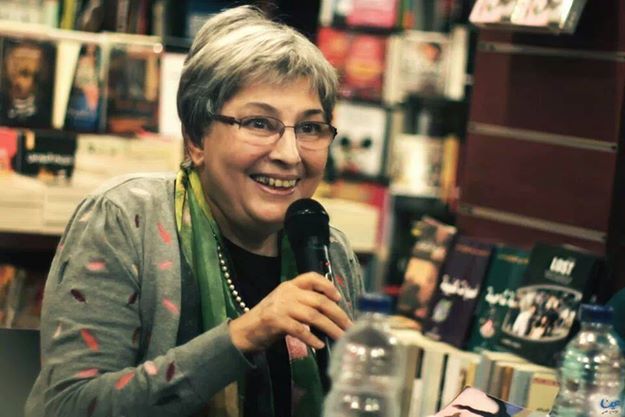 George Martin once said: “A reader lives a thousand lives before he dies, the man who never reads lives only one.”

For bookworms, the joy of reading reaches a new level in any novel of Radwa Ahour’s, and to live with each character she draws in her books is like exposing a new side of their personality.

Radwa Ashour passed away on 30 November 2014. She was literature professor and the wife of Palestinian poet Mourid El-Barghouti, and author of several books personifying the struggles of different people.

Ashour is one of the few writers who combined the magic of fairytales and the reality of the actual world in her novels. She also left a huge imprint in real life through her political actions.

The 9 March group for universities’ independence organised a conference in memory of their deceased colleague, Radwa Ashour, last Sunday at the Conference Center in Cairo University’s student hostel.

In the presence of Ashour’s family and friends, members of the group talked about Ashour’s voyage from literature and education to political activism. Hala Kamal, an Assistant Professor at the Faculty of Art’s English Literature department, in which Ashour also worked as a professor, started the evening with some of Ashour’s famous writings.

It was not only group members who spoke at the conference, but also Mariam El-Naqr, who said she never got the chance to know the renowned author on a personal level. She described how she got to know her through the books she wrote and her lectures.

Later in the afternoon, Tameem El-Barghouti, Radwa Ashour’s son, presented a poem he wrote for his mother in colloquial Arabic that was followed – and sometimes interrupted – with hearty applause.

Ashour’s literary life began during her educational trip to the US in the 1980s, with her first published book entitled “The Journey: Memoirs of an Egyptian Student in America”. And that was how the conference began, with Hala Kamal reading a passage in Ashour’s first book, followed by another reading of her second book “Warm Stone”.

After the readings, Awatef Abdul-Rahman, Head of the Journalism Department at Cairo University spoke of her relationship with Ashour, mentioning her colleague’s journey through the rallies opposing the Camp David accords.

Abdul-Rahmen described how both women received together the news of the arrests of 1,800 Egyptians who rebelled against the accords.

She recalls the scene in which 22-year-old Radwa stands up shouting bravely “Free the detainees this instant!” in a writers conference in the Delta town of Zagazig.

“She was not afraid of being arrested, nor was she afraid of the bodyguards surrounding Youssef El-Sebai, the Minister of Culture at that time, who was heading this conference,” Abdul-Rahman said. “The atmosphere was electrified, chaos was spread, but she remained steady with her principles and values as she did throughout her life.”

Her family was dispersed by her husband’s departure to Budapest as a result of being forbidden to reside in Egypt along with the other Palestinians living in Egypt, said Abdul-Rahman.

“Radwa made a difficult choice to stay in Egypt, to raise her child, Tameem, and to serve her country with her knowledge as a university professor,” she said .

Abdul-Rahman also spoke of Ashour’s grief at the news about the assassination of Palestinian cartoonist Naji El-Aly in the UK.

Later, after readings from “A Woman from Tantoura”, Dr Hassan Naf’ah, Head of the Political Science department at Cairo University, said “the bitterness of the defeat of 1967 opened Radwa, along with our generation’s eyes, to the Palestinian conflict”.

After Kamal’s readings from “Apparitions”, Dr Emad Abo Ghazi, professor of Archival Studies, read out Ashour’s introductions in the seven issues of the non-periodical book “Al-Mowajaha” for which she worked as an editor-in-chief.  The complete seven issues of “Al-Mowajaha” were available on CDs for attendees to pick up after the conference.

Following readings from “Khadija and Sawssan”, Gharaa’ Mahna, literature critic and professor, said: “Radwa the smile, the hope, even in the most difficult times.”

Later on, readings of her last novel, “Heavier than Radwa”, followed by the storytelling of Ashour’s stand and participation in the 25 January Revolution which was often interrupted by her illness.

“We were so naïve when we thought things would end in 18 days,” Manar El-Khouly quoted Ashour telling her. El-Khouly is a professor at Qasr El-Aini Medical School and was a volunteer physician in Qasr El-Dubara’s field hospital during the revolution.

In a part from “Heavier than Radwa”, Ashour retold the story of the attack on her and other members of 9 March in late 2010. Following that, Hany El-Husseiny, a Faculty of Science professor at Cairo University who witnessed this incident, continued describing the scene the ‘thugs’ made – led by a young man called “Ghareeb” – in front of the School of Arts and Literature at Ain Shams University.

Bringing the conference to an end, Mustafa Said played his music blending in all feelings of sorrow and mourning over the loss of Radwa Ashour.

9 March was established in 2003 by Cairo University and Ain Shams professors who called upon the independence of Egyptian universities. The highlight of their activities was when they opposed the decree of having Ministry of Interior security forces inside university campuses rather than having security guards answerable to the university.