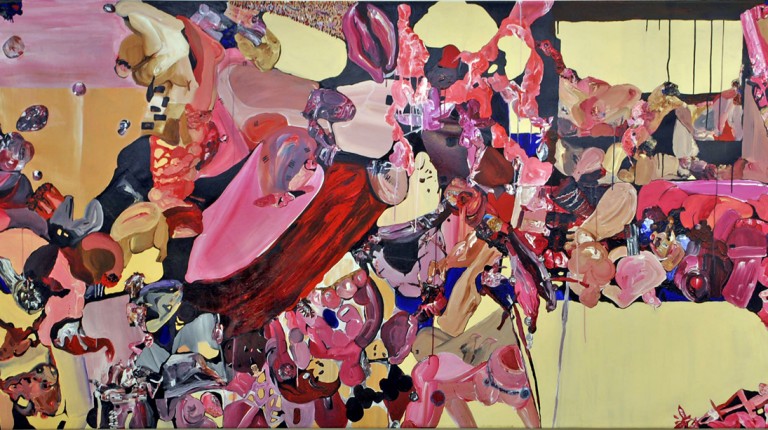 When one walks into Mashrabia Gallery, they are met with an explosion of warm hues —conceptual acrylic paintings that draw their inspiration from the human body. The skin-tone colours, with pronounced reds, oranges and splashes of pink, drive home the idea that artist Nada Baraka has been working with the last couple of years—the body in its uncovered form.

Baraka has been in several group exhibitions in the past. This exhibition – nestled upstairs from a shisha cafe in downtown Cairo – is her first solo exhibition. Titled “Fractals”, the abstract and spontaneous imagery set to reveal the perception of the body in today’s society.

Baraka’s introduction to art started early, but it was not until she attended university that she discovered that it would become her life’s passion. Baraka tells Daily News Egypt: “I’ve always had the talent to at least draw or paint, but I never really pursued it until I took a few courses.” Baraka, who was initially a mass communications major at the American University of Cairo (AUC), signed up for an art class one semester, and was instantly hooked.

Upon graduating from AUC with degrees in mass communications and fine art, Baraka packed up her easel and paint brushes and set off to London. There she attended Central Saint Martins, an art college that is known for its research base and technical resources, and after 2 years of honing her craft, she received a Masters in Fine Art.

Baraka’s paintings are mostly done in acrylic. She says that her style is often spontaneous, and she paints quite fast, so acrylic, unlike oil, works best with her method.

Her work in “Fractals”, despite its conceptual nature, is tangible. Initially, the colours are astounding. This burst of colour appears chaotic, but seamlessly, form and order are restored.

Once the eyes have adjusted, the subject comes into focus. Shapes come to life as each one draws the onlooker’s attention, compelling them to resort to their imagination to fill in the gaps and grasp the story being told.

The story one gathers is that of the human body.  Baraka says that her thesis had her focus on the body and everything about it. Baraka was grappling with, as she puts it, the “uncovering of the body”.

Baraka’s paintings, insofar as they deal with uncovering the body, are not just limited to stark nakedness, but also apply to the life force that lies beneath the flesh.

Baraka explains that she “began with researching the body, and organs, inside and out, and everything related” in order to establish her subject. Blood, and organs, and the beating heart are all captured by the paint brush and exposed by Baraka, specifically in the painting titled “Exhale”.

For Baraka, the perception of the body is a battleground of representations. The body and what it suggests changes, depending on the role assumed – a role that is ultimately determined by gender, age, and aesthetics.