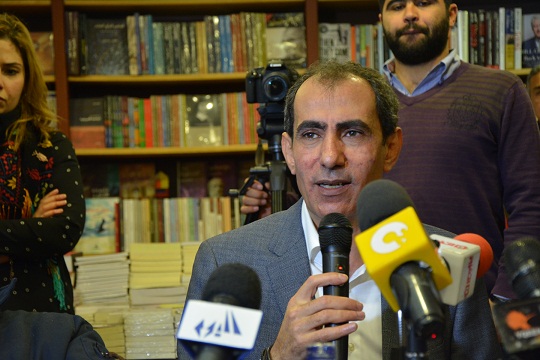 In a crowded bookstore in Zamalek, with people who came from different governorates of Egypt, Yousry Fouda signed his latest book “Fe Tareeq Al-Atha” (In Harm’s Path) on Monday.

Going back to the the main political events that have taken place in Egypt over the past four years, along with them come feelings of being lost and unaware of where the truth lies. Meanwhile, some media tools play strong role in influencing the direction of the path people should start taking – but this was the last thing that Yousry Fouda’s daily talk show did.

For three years, following any major event in the Egyptian street ,it would be normal find people anticipating the start of Fouda’s programme “Akher Kalam” ( The Final Word) in which he covered the scene with different angles, and analysed them. This is how he gained his wide publicity in the Egyptian streets.

In his book, Fouda tells his story of travelling and meeting two of the most prominent figures in Al-Qaeda. One of them was the chairman of the military committee in Al-Qaeda, who planned the 11 September attacks in the USA, when four passengers airline flights hijacked by Al-Qaeda hit the World Trade Center in New York City. Fouda recalls how he stayed with them for a few days in Pakistan to interview them, and trying to understand the reasons behind the attack and how they planned it.

In the other half of the book, Fouda describes his illegal journey into Baghdad to learn more about the Islamic State in Iraq and the Sham (ISIS).

“After coming back from Pakistan, I stayed for two months just studying the huge amount of information I got there, without telling anyone anything about the visit,” Fouda recalls. “I never had any previous judgments over them, I just never got over my problems with killing innocent civilians”

Fouda explained how a journalist’s job should simply be covering the events as they happen, without adding or changing anything in them based on his own thoughts or beliefs, and allowing the audience the chance to judge.

“I had no problem with dealing and talking to terrorists, and they don’t mind being called terrorists, as long as I’m covering the other side of the story to people,” Fouda added.

Moving on to the reasons he turned towards writing after resigning as an anchor of one of the most successful daily talk shows, particularly after the changes that have occurred over the last period, Fouda expressed the concerns he had before starting the fourth season of his talk show. “I couldn’t be a part of the Egyptian mind violation process that the media commits nowadays.”

“Will I be capable of reflecting the human and social values in which I guarantee the least amount of self-respect? I couldn’t stop asking myself that question,” Fouda said.

As for the violations inflicted upon Egyptians, both inside Egypt and out of it, he cried out loudly:“”Till the Egyptian blood is no longer cheap, down with any president!”