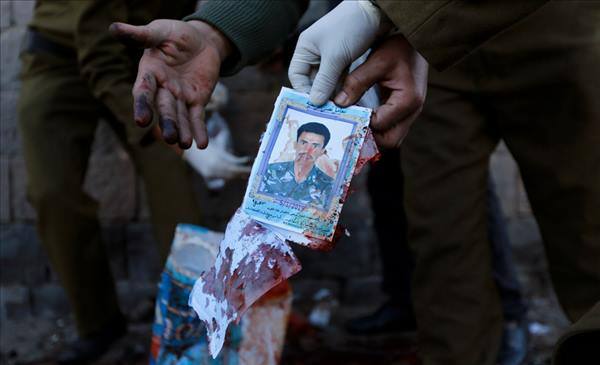 Houthi rebel militias bombed the presidential residence of Abdrabou Mansour Hadi in the Yemeni capital of Sanaa on Tuesday, with no casualties reported.

The insurgent group took over much of Sanaa in September, amid fierce clashes with the state’s armed forces, which left hundreds of civilians dead.

Abdel-Malik Al-Houthi, leader of the Shi’a rebel group, appeared on Almasserah TV channel, founded by the group in 2012, after Tuesday’s presidential residence attack, and gave a long speech urging new demands from the Hadi regime and Yemeni people.

“None of the National Dialogue Conference outcomes were activated, and it is all because of the selfish political parties and corrupt old regime,” Al-Houthi said.

Al-Houthi also rejected the new draft constitution proposed by the government earlier in January, which divided Yemen into a federation of six regions during the political transition, saying: “This six regions division will tear Yemen apart and will raise more conflict.”

On the economic level, Al-Houthi demanded that the new budget for 2015 should be revised by an independent financial committee to address the deficits in it.

Caught between an armed struggle between the state armed forces and the rebels, Yemeni citizens’ daily lives were directly and negatively impacted.

“Most of the major roads are blocked. The people cannot go to their workplaces and the students cannot go to their school exams or universities,” said Adel Abdel-Moghni, a Yemeni citizen based in Sanaa. “All the shops were closed as well after the attacks, which provoked fears and horror among the citizens,” he added.

He added the internet connection has been worsening, especially after the attacks last Monday and Tuesday, but the Yemeni government said it is due to the increasing number of users trying to follow the news.

According to Abdel-Moghni, Houthi rebels are supported by some citizens but not the majority of them. Instead, the majority of Sanaa’s Yemenis are against their attacks, especially politicians and activists.

He also said the rebels main point of strength is not the publicity as much as their armed forces, nothing that they have been acquiring more weapons from the military camps they attacked ever since their first attack in Sanaa in late September.

A.A., an activist from the oppositional southern rebel movement in Aden told Daily News Egypt: “I was offered $15,000 to fight with Houthis.” He said many southern rebels were polarised and recruited by the group to fight for money.

He claims the Houthis’ acts are supported by foreign powers, such as Iran, which aim control Yemen. He backed his sentiments by referring to the fact that they managed to create a TV channel ‘Almasserah’ to promote their ideologies.

“What we are trying to do now is bring back those individuals who were recruited recently by Houthis to fight with the government,” A.A. said. He added we are also trying to voice our cause, which is protecting the southern region and its resources, through peaceful ways and throughout the entire Arab world, and especially Egypt.

In response to the escalated attacks in Sanaa, the Egyptian foreign ministry urged Yemenis to stop using weapons and violent acts, and instead to support their nation and work harder to reunite it. In an official statement, the ministry also called on the political parties in Yemen to act responsibly towards the current events and preserve their country from the complicated political and security situation, which threatens its independence.

As ships on route between the Gulf countries and the Mediterranean pass through Yemen’s coastal waters, the country’s security status is crucial for several countries, especially oil importing ones. However, it has been witnessing several waves of conflict and division attempts between the north and the south.

In 2011, following the “Arab Spring” movement in the Arab world, Yemen witnessed mass protests that toppled its 33-year president Ali Abdullah Saleh, who handed over the power to his vice president Hadi, the current president.

In a bid to hold the country’s several conflicting parties together, Hadi launched a forum in early 2013 called the National Dialogue Conference, which witnessed a turnout of over 500 Yemeni lawmakers, politicians and activists.