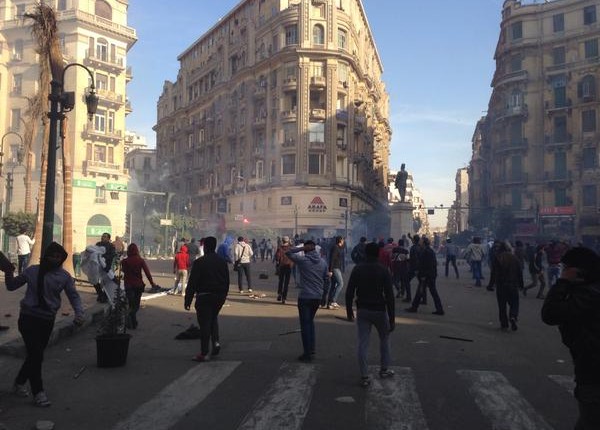 Around 80 protesters clashed with security forces at Talaat Harb Square in downtown Cairo, on Thursday. The youth movement ‘Ahrar’ claimed the protest.

Beginning at around 3pm, protesters with Molotov cocktails and fireworks took over one of central Cairo’s busiest locations.

Daily News Egypt arrived as the protest was being dispersed with tear gas and live shot; many rifle casings were littered on the street.

People in plain clothes, unclear whether public or plain clothes security, picked up the rifle-style bullet casings after the dispersal and gave them to the police.

Daily News Egypt also witnessed protesters breaking up bricks to throw at security forces. Some protesters were caught as they fled the scene, they were violently beaten by non-uniformed men and thrown in to the back of police vans. The protesters all appeared to be young men.

A building by Talaat Harb square was also set alight. It is unclear whether it was from the Molotov cocktails used. Significant riot police and a fire engine arrived around 15 minutes after the protesters were dispersed and the fire was extinguished.

While witnesses were not sure of the affiliation and identity of the group, Ahrar movement claimed responsibility on its website just as protest had started.

Ahrar said on its page that security forces began arbitrarily arresting protesters and “all of those who looked as though they belonged to the revolutionaries”. The movement requested that other protesters demonstrate in different parts of town to relieve “the pressure off the downtown demonstration”.

“Two days ago, the head of this neighbourhood appeared on CBC and spoke about how downtown Cairo has become the calmest, safest, and most stable place in Egypt after it had been the most inflamed. Sorry dear, we just wanted to prove to you that the fire of the revolution is under the ashes, and we will not let you sleep! We promise you will fall!” the group said.

Ahrar, founded in August 2012, is a rebellious independent youth movement that states it is against military rule, remnants of the old regime (of former president Hosni Mubarak), and the Muslim Brotherhood. It also denounces what it calls US imperialism.

Security forces have killed at least a dozen of the movement’s members, and arrested scores more as it has previously clashed with the group during demonstrations over the past two years.