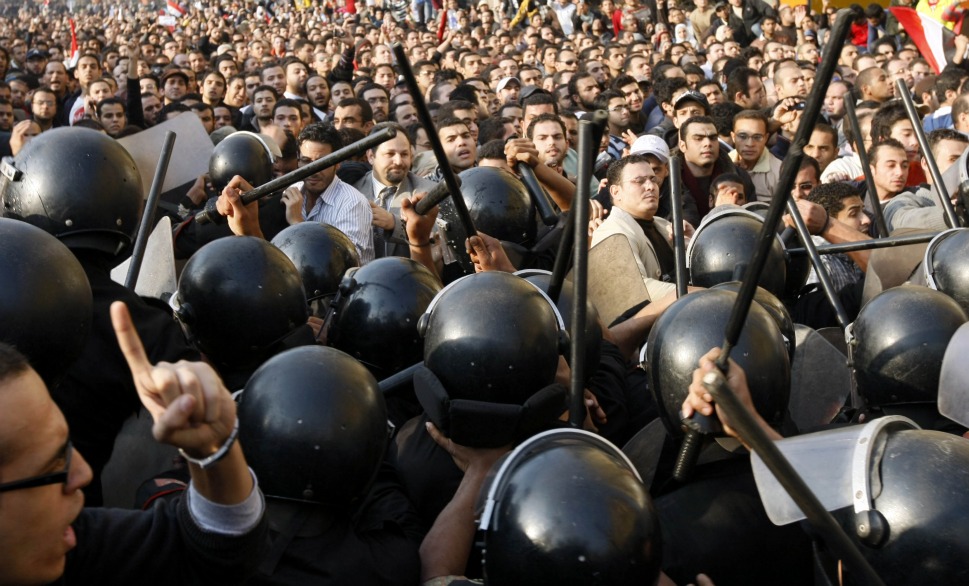 The 6 April Youth Movement, Al-Jamaa Al-Islamiya, Students Against the Coup, and the Muslim Brotherhood, launched calls for protests ahead of 25 January, which will mark the fourth anniversary of the 2011 revolution, on their social media pages.

Since the 25 January Revolution, people demanded bread, freedom and social justice, yet none of the demands were met, 6 April said in a statement. It added that “the regime has been working on distorting the image of the revolution through media and lies”.

“Many of the country’s youth are behind bars; students are arrested; the media is supporting the regime; army personnel are preferred to civilians; security forces are killing Egyptians; Sinai is suffering marginalisation and displacement; Mubarak and his regime are acquitted from prisons,” the statement added.

Hence, “the 6 April movement announces its participation in the 25 January anniversary in Cairo and other governorates… calling upon whoever believes in the demands of the revolution to join.”

6 April is a secular liberal opposition movement formed under the Mubarak regime that took a leading role in the 25 January Revolution.

The Salafi Front, a religious political organisation, also announced it will participate in the coming protests. “Amid the oppression Egyptian are facing, the front calls upon its member and Egyptians to continue its struggle,” the front said in a statement.

The group said that “besides our focus on dissent, homeland, and unity… we stress on the issues of respecting the [Islamic] identity.”

The front has called for wave of protests last 28 November, labelled “The Muslim Youth Uprising”. The protests came as a response to “secular attempts to weaken the Islamic identity and Sharia”, according to the group.

Students against the Coup movement also vowed to stage demonstrations, in protest of “the return of the Mubarak regime, the increase rate of murdering and arresting all anti coup voices”.

The movement stressed in a statement that they will try to march to public squares and that “if the army militias attack us, our response will be decisive”.

On the other hand, Al-Jamaa Al-Islamiya called for unity of “Muslim, Christians, liberals, and leftists“ to end disputes and to help fulfil the demands of the revolution.

Similar statements have been release by the Muslim Brotherhood since the start of the year.

Egypt is celebrating the fourth anniversary of the 25 January Revolution, when demonstrators took to the streets protesting corruption and police brutality, leading to the full retreat of security forces and the ouster of former president Mubarak.

However, state television reported Friday that the government will “delay” the celebrations, “in mourning of the death of the late King Abdullah bin Abdulaziz Al-Saud.” The 90-year-old Abdullah died early Friday morning after spending weeks inside a hospital.

During demonstrations marking the anniversary of the revolution last year, over 1,000 protesters were arrested and 108 killed, according to the independent statistical database Wiki Thawra. The detainees’ conditions have been condemned by several human rights organisations, including Amnesty International. The Ministry of Interior, however, denied torture allegations reported by those who had been preventively detained.

In response to the latest minor bombings, security forces have been deployed in major squares, near public institutions and police and army facilities. An eyewitness told Daily News Egypt that heavy equipped army vehicles are now deployed to secure Tahrir Square in downtown Cairo.

Since last year, a considerable amount of security forces, ranging from police special troops to army infantry personnel, have been standing guard near Tahrir Square, right next to the Egyptian Museum. In different incidents, such as the Mohamed Mahmoud anniversary on 19 November, the “Muslim Youth Uprising”, or the post-Mubarak verdict violence in late 2014, army tanks have blocked passages to the square, and secured the areas around by patrols.

The Ministry of Interior also has announced a number of arrests involving alleged 11 members of two “terrorist cells” in Giza and Minya, on charges of “establishing a terrorist cell, bomb making, and targeting police and army officers.”

Also, the underground metro stations are expected to witness more security presence. Since last June, when five minor improvised explosive devices went off in five of Cairo’s underground metro stations, metal detectors have been stationed in every station. In addition, a new force of police conscripts has been deployed inside the stations to maintain order and to intervene in cases of explosions.

In a recent development, a metro authority official told state media, that there are direct coordination between the police forces and the authority, and that a special safety plan have prepared, entailing the increased deployment of police forces in the station and the metro cars.

He added that the authority will run the metro as a “normal day”, and will not raise a “high alert” warning.