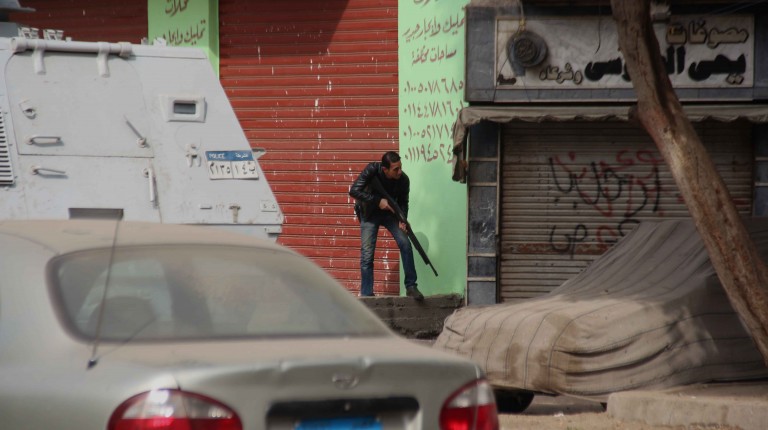 Conscript Mohamed Ali Abdulhafiz from the Central Security Forces was shot dead, while three officers were injured by live bullets during clashes between protesters and security forces in the Cairo neighbourhood of Matariya on Sunday, the interior ministry said.

As Egypt embarks on the fourth anniversary of the 25 January Revolution, 16 citizens were killed while 38 others were injured across different governorates, said the official spokesperson of the health ministry Hossam Abdel Ghaffar.
Abdel Ghaffar further said in statements to MENA: “The 38 injuries were across provinces of Cairo, Kafr El-Sheikh, Minya, and Beheira while the death cases included two from Beheira, one from Alexandria, and 13 from Cairo.”
The fourth anniversary witnessed rallies across neighbourhoods of downtown, Matariya and Ain Shams, which the interior ministry stated were organised by the Muslim Brotherhood, adding “further security measures are currently taking place to contain the unrest”.

In Matariya, the interior ministry said that a car exploded after it was torched by fireworks, while in Ain Shams, the Students Against the Coup spokesman said that a man was killed after being shot in the head by live rounds during clashes.

Last year Matariya saw the worst violence during the third anniversary of the 25 January Revolution, as pro-Morsi protesters confronted local residents and riot police. WikiThawra, an independent database dedicated to the Egyptian revolution, listed 30 dead and 70 injured in the mentioned incident.