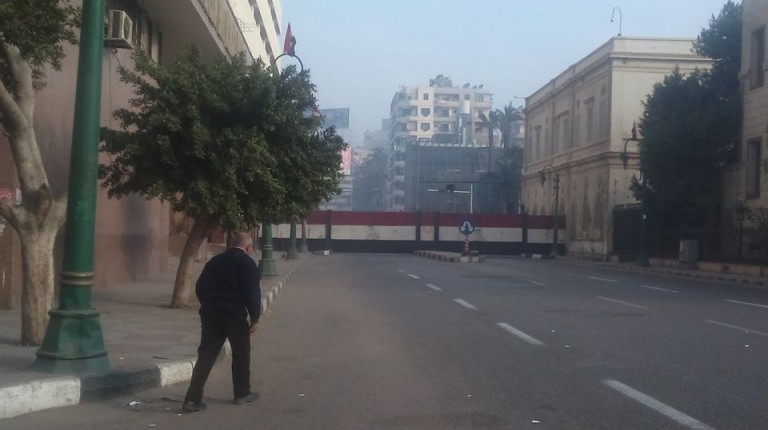 Armed Personnel Carriers closed Tahrir Square in downtown Cairo, while police forces closed Al-Nahda Square and all roads leading to both squares, on the anniversary of the 25 January Revolution.

The closure comes amid calls from different revolutionary groups to stage anti-government protests.

Assistant to Minister of Interior General Abdel Fattah Osman said Saturday night in a phone interview with privately owned TV channel Al-Youm: “All celebrations to commemorate the 25 January Revolution are delayed based on the decision of the Egyptian cabinet, in mourning of the death of the late King Abdullah bin Abdulaziz Al-Saud.”

Celebrations were supposed to take place in Cairo Stadium and in some major public squares in commemoration, but were delayed by the government.

Osman added that protests are not permitted, wither they are anti- or pro-government. “Our forces are present in the squares, and are ready to disperse any gathering that might block the traffic flow,” Osman said.

In a related development, the Anti-Coup Alliance published an early statement asserting that Tahrir Square, the Presidential Palace, and the Egyptian Media Production City are targets for mobilisation and demonstrations.

The statement added that they are warning members of the Ministry of Interior from targeting protesters.

State media reported Sunday morning that a considerable number of police are being deployed, in “anticipation of any form of rioting or protesting, expected to be executed by the Muslim Brotherhood group”.