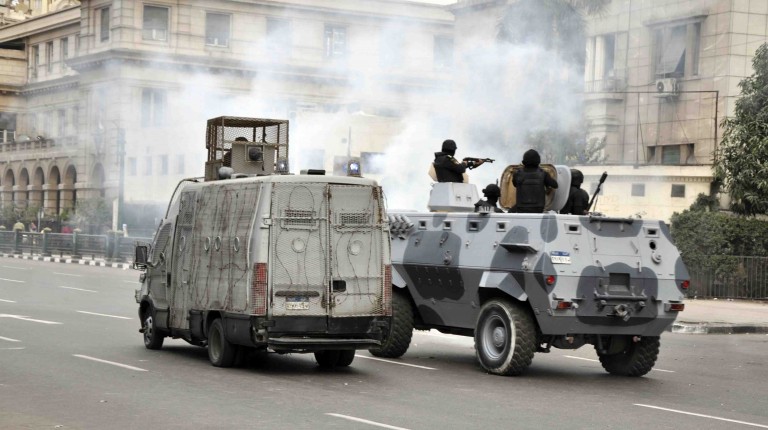 The most recent announcement from the Ministry of Health on Sunday’s anniversary reports 23 dead and 97 injured, across Egypt. Officially, the clashes made the day more bloody than the protests they were to commemorate four years earlier, but less so than the over 64 reported dead in the 2014 anniversary commemoration. The anniversary also followed days of clashes with security forces that included the high-profile deaths of two female protesters.

According to a report from Egyptian group Association for Freedom of Thought and Expression (AFTE), their staff documented “violations against demonstrators and journalists throughout the day” in all governorates. The group’s researchers and legal unit monitored the day, also providing legal support to those arrested, and documenting violations which “varied between murder to indiscriminate arrests”.

Using Ministry of Health information and other sources, the group believes that overwhelmingly, the greatest number of deaths occurred during clashes in the eastern Cairo district of Matariya. During clashes in the area, tear gas and birdshot were used to disperse crowds using Molotov cocktails and rocks.

Unconfirmed eyewitness reports and media circulated on social networks reported security forces indiscriminately used live ammunition to disperse protests that continued after other demonstrations had been cleared elsewhere in Cairo.

Of the 97 injured, the Ministry of Health claims that 78 were civilians and the remaining 19 were security force personnel. The ministry also continued that at least one death in Damietta was that of a terrorist, who died attempting to place a bomb, with over 150 arrested nationwide for rioting.

In a Monday press conference, Interior Minister Mohamed Ibrahim said security forces were measured in their response to public demonstrations. He said: “If it was not for the security forces’ decisive role yesterday, we could have seen a different Egypt today.” He continued, claiming that none of the 23 killed yesterday were shot by the police.

However, AFTE’s report contends that it “monitored police forces using tear gas, bird shot and live bullets on protesters”. The report said that “the police violated all the rules governing handling demonstrations, including the Protest Law legislation”.

During the clashes, Federica Mogherini, the European Union’s High Representative for Foreign Affairs and Security Policy and Vice-President of the EU Commission, issued a statement calling for “all parties to show restraint”.

“Today’s violence in Egypt during protests on the occasion of the fourth anniversary of the Egyptian revolution has resulted in the loss of lives,” Mogherini said. “Freedom of peaceful demonstration must be safeguarded and dialogue is the only way forward.”

Besides demonstrators, AFTE also documented illegal, violent and intimidating treatment of media covering the events, including the arrest of nine journalists. Others had their possessions seized, in addition to facing violence generally meted out on crowds.

AFTE documented for instance the case of Nader Nabil, who was shot with birdshot and wounded in the head as he was covering events in the Ramses area of downtown.

In a report published Monday, prominent international NGO Human Rights Watch (HRW) lambasted Egyptian security for the treatment of protesters and the public during the days surrounding the anniversary.

HRW said the numerous deaths “underscores the need for an independent investigation into the authorities’ excessive use of force”, including the breaking of international treaties Egypt has ratified. These include the United Nations Basic Principles on the Use of Force and Firearms by Law Enforcement Officers.

HRW also looked at the deaths of activists in the days leading up to 25 January, including that of 31-year-old Shaimaa Al-Sabbagh. The activist’s death made international headlines when she was killed by birdshot at Talaat Harb Square, as her Socialist Popular Alliance party attempted to place flowers at Tahrir Square to commemorate the deaths of the revolution’s martyrs.

HRW said: “In Al-Sabbagh’s case, clear evidence – including videos of the gathering before, during and after its dispersal – shows that police responded to a small, peaceful protest with excessive force, leading to Al-Sabbagh’s death.”

While eyewitnesses present claimed Al-Sabbagh was shot by police, government officials, including interior ministry spokesperson Hany Abdelatiff have denied this, and suggested protesters such as the Muslim Brotherhood may be behind her shooting to “drive a wedge between the police and the people”.

At the Monday press conference, the Minister of Interior responded to HRW’s report, stating that the body “is not always neutral in its reports”. He continued that “If we were firing birdshot on Talaat Harb, there would have been a lot more than just one woman shot”.