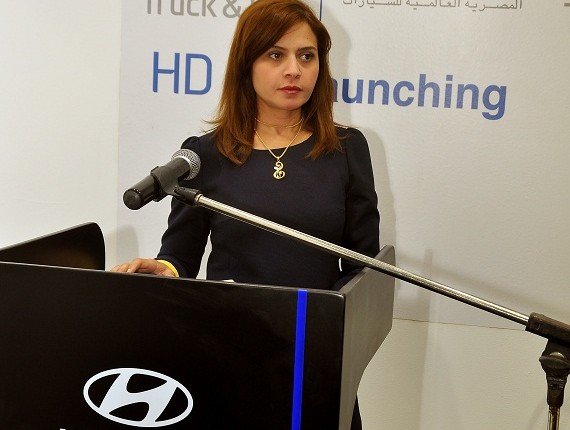 Nevine Khalifa is a woman of great ambition and works in one of the most difficult fields for women to enter in, managing marketing projects for trucks and buses.

Khalifa achieved extraordinary success throughout her years working with Toyota Egypt in passenger car and bus marketing. She did not know that buses would be her primary concern for three more years, during which time she watched and learned how to manage this system.

She was then allowed the opportunity to move in 2011 to an entirely new world full of challenges, being appointed director of marketing company EIM. The company is an agent for Hyundai trucks and buses as well as Yamaha motorcycles, beach buggies, yachts, and golf carts.

Khalifa is responsible for marketing all of these agencies, each of which has a special nature that requires a special type of work.

Do you feel there is a contradiction in the nature of each agency, as each requires a new marketing idea for a different client? How do you undertake your work efficiently?

In reality, everyone who looks at this from afar feels that there is a contradiction, but in reality, it’s very simple in my opinion. This could be divided into two parts: first, the craft, study, and experience, since the nature of the work for all agencies is managing marketing. This requires the same efficiency to the extent to which the customer can be addressed and how to convince him of the product. For example, when marketing buses, we address tourism and mass transit companies, but for trucks, you need to address companies that use that type of vehicle. Cars are a means to generate wealth and provide assistance, so varied customer and market needs require adequate study.

What is your opinion on the government’s latest decision to stop importing motorcycles and Toktoks?

In fact, this decision has nothing to do with reality and is a hasty unstudied decision, given that the government has issued it to curb the increasing number of terrorist attacks in our country. The motorcycle was the first to get affected by this decision, but of course not the imported motorcycles whose agents import specific motorcycles with prices exceeding EGP 100,000. The agent immediately pays the money and gets the licence, and he usually follows traffic regulations, unlike other motorcycles allocated in Egypt and whose price ranges from EGP 2,000 to EGP 20,000, which is a huge issue.

What do you think is the solution to this?

It is important to issue mandatory regulations and tighten violation laws on whoever owns unlicensed motorcycles. What we see in the streets on a daily basis is a real mess and is dangerous without any laws or standards for licence ownership. These laws and standards should include different tests according to the motorcycle power, a certain age for driving, special lanes for Toktok, and a certain load on the motorcycle. The government has to also reconsider importing motorcycles from abroad.

Approximately how many motorcycles and buggies are in Egypt? What is your company’s share?

Yamaha owns 80% of the total market share as we import all the government’s needs. However, unfortunately there is no actual statistics on our sales figure because the government does not provide real numbers either from the customs administration or traffic administration. This is not our fault, especially as most of these motorcycles are imported by individuals or in separate pieces, and some importers claim that they are spare parts and then they collect and sell them, which makes it hard to figure the real numbers. The administration of traffic is also unable to licence all motorcycles in Egypt.

How do you see the future of trucks, marine traffic, motorcycles, and public transportation?

I believe the future will be better, because we are approaching political and economic stability, which is important to us and will help in growth and recovery. I also believe that, in the near future, trucks will play an essential and powerful role, especially with the government’s expansions in mega projects which will be implemented soon. As per buses and public transportation, we hope that tourism will recover, because the sector has been almost at halt during the past four years, and we look forward to a recovery that will bring improvement to the transportation sector as well. We hope that the government will reconsider laws on motorcycles. As to marine traffic, it is walking with steady pace and is witnessing a major increase in sales and we hope that sales will double in the following period.