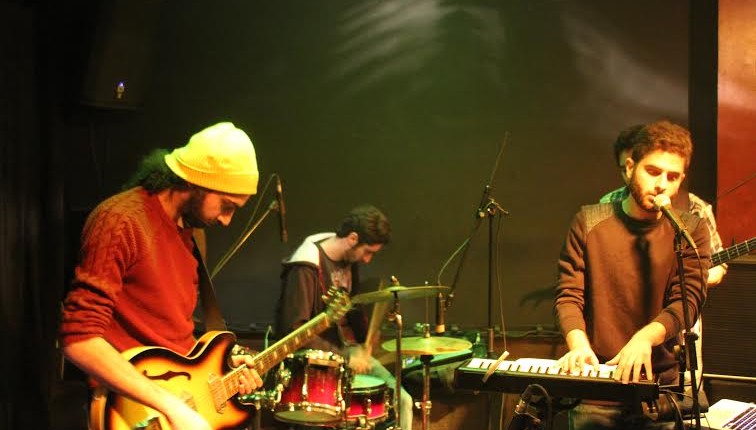 The world we live in today offers a constant stream of entertainment. The Internet, along with various forms of software, has empowered musicians, photographers, writers and filmmakers to create and distribute their works at an unprecedented pace.

This brave new world that we live in often leaves us in a state of sensory overload. Unable to distinguish quality from triviality, sounds and colours, along with their messages, blur and fall into a background of white noise. Occasionally, in the midst of the swell of artistic congestion, something stands out.

On Tuesday night, “Portrait Avenue”, a band that hails from Alexandria, did just that. Their debut performance at Cairo Jazz Club held our attention, and like shores of their native city, offered a breath of fresh air. Their sound emerges from the sea of mediocrity, and forces one to ask: “Who are those guys?”

Their genre of music is experimental, a clean sound with falsetto vocals that delivers hip-swaying melodies with an unwavering beat.

Before hitting the stage to run a sound check, the members of “Portrait Avenue” spoke to Daily News Egypt to discuss how they came about, what their influences are, and what they hope to accomplish.

The band is a 7-piece ensemble and consists of Belal Mohamed Ali on vocals, two guitarists Ragy Haddad and Samir, Emad Adel the bassist, Ahmed Nasser who plays violin, Tarek Hussein on the keys, and Wadi on the percussion.

After winning the “Egyptians’ Got Talent Battle of the Bands”, they got the attention of the keyboardist of “Masar Egbary”, who told them about the “Red Bull Bedroom Jam”. “Portrait Avenue” went on to take first place and got invited to Madrid to produce their first studio album, titled “Rainbow Escalator”.

Like most groups, “Portrait Avenue” started off as a jam band. Starting with only three guys, it slowly evolved to encompass what it is today. The original members were Adel, Wadi and Samir.  “We were a jam band, we didn’t know what we were doing we were just jamming, playing ‘Metallic’,” Adel said.

Finding a vocalist who would fit the genre of music that “Portrait Avenue” was going for proved to be quite difficult. Adel said that in “Egypt it’s very hard to find a good vocalist”, and Ali added that “it’s hard to find a vocalist to sing with this kind of music”.

Ali, who has only been singing since 2008, was the essential element that took them from a jam band to a group with an original sound. He has quite a range, and has impeccable control over his voice. His vocals have a certain haunting feel to them, but one never feels uneasy.

Tarek, who started playing the keys 17 years ago at the behest of his parents, started out with classical music and then shifted over to a more modern sound at the age of 16. His influence, along with Wadi, (who has been playing percussion for over six years) is jazz.

This is another aspect that adds to the unique sound of “Portrait Avenue”, the slight jazz undertones that seamlessly weave with an otherwise experimental sound.

Wadi’s sister encouraged him to pick up the drums, and after two years he’s been able to turn his hobby of table banging into well-executed drum skills.

Adel actually started out playing guitar, but switched over to the bass. “I love the groove, the bass makes you dance, the guitar is good but it doesn’t make you dance like bass,” he said.

The original guitarists and violinist, consumed by schoolwork and studying abroad, were absent for their Cairo Jazz Club debut, but told the band to continue to forge ahead.

Their set at Cairo Jazz Cub is best described as fresh. It is not heavy-handed in its delivery, and it is not subdued enough to go unnoticed. In the attempt to try to distinguish oneself, many bands make the mistake of doing just that – trying too hard to be distinguishable.

“Portrait Avenue” is different, but not because it’s their sole aim; rather it’s a result of a hybrid of talented guys. When asked where they see the band in the future, they said almost collectively that the goal is just to keep playing music and just to keep playing what we love. It is this attitude that will hopefully keep their sound fresh and genuine for years to come.