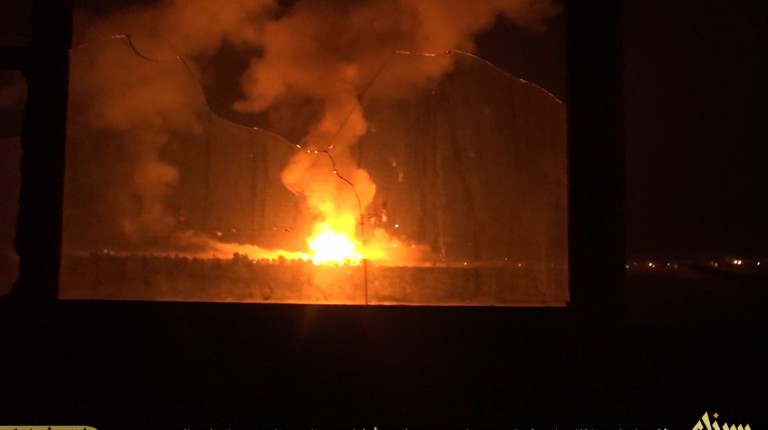 ‘State of Sinai’ claimed the most recent North Sinai attack that took place Thursday evening, targeting military and interior ministry facilities, in a Friday statement providing details about the implementation of the attack.

The attack targeted a number of security facilities in Al-Arish, Sheikh Zuweid and Rafah. According to the statement, “hundreds” were killed as a result of the attack, a claim refuted by a representative from the military spokesman press office who said “the numbers will not be announced”. However, he said the numbers reported by media outlets, which range between 20s and 30s, are closer to the real numbers.

An Al-Arish resident told Daily News Egypt that  people living in Al-Arish speak of the numbers of killings  of nearly 100, pointing out however that nothing has been announced.

The attacks took place after curfew hours in North Sinai, which start at 7pm and end at 6am, “to protect the lives of Muslims”, according to the group’s statement.

The curfew in North Sinai was extended on 25 January for a further three months to end on April 25. The authorities imposed the limited state of emergency in North Sinai for a period of three months following the 24 October attack that left 30 personnel dead, which was regarded the largest attack on security personnel since the insurgency rose in Sinai following the ouster of former president Mohamed Morsi in July 2013.

The Al-Arish attacks were carried out by car bombs that targeted the army’s Battalion 101 and a security complex of the North Sinai Security Directorate, Homeland Security Apparatus, Military Intelligence headquarters and a hotel that belongs to the army, in addition to attacks on checkpoints in Al-Arish, read the statement.

The Rafah and Sheikh Zuweid attacks were mainly on checkpoints, except that in Sheikh Zuweid the group attacked Al-Zohor military camp with mortar shells.

The group signed the statement in the end with “Islamic State”, with the date of the attack on 29 January.

‘State of Sinai’, formerly Ansar Beit Al-Maqdis, pledged allegiance to the Islamic State in Iraq and Al-Sham (ISIS) in November 2014.

The statement also noted that the attacks come in a series of attacks entitled “We Swear We Will Revenge”, “to avenge for women and girls” held in Egyptian government prisons.

This was not the first attack on security personnel claimed by the group under the quote of “We Swear We Will Revenge”; a video posted by the group featuring the abduction and killing of police officer Ayman Ibrahim Al-Desouky earlier in January went viral on social media networks.

The video included Al-Desouky addressing the interior ministry and calling on them “to release all women and girls detained in their prisons or else all police officers will be targeted”, and was concluded by showing live footage of his execution by gunshots.

Prosecution ordered a media gag on the case and investigations related to the incident the day after.

President Abdel Fattah Al-Sisi expressed grief over the attacks and the losses they left behind saying: “Egypt pays the price for countering terrorism and extremism,” according to the state-run news agency MENA.

Al-Sisi asserted in statements he made in Ethiopia following the attacks, as he was there attending the African Union summit, that what is happening is a “war on Egypt as it fights the most powerful secret organisations in the past two centuries” referring to militant insurgency Egypt witnesses in Sinai, pioneered by ‘State of Sinai’.

The Egyptian president added “all the blood of the 90 million Egyptians is dear and we will avenge everyone who sacrificed his life for the country”, explaining that “Egypt would have paid a more expensive price […] if the Brotherhood were still in power.”

Al-Sisi said that Egypt will continue the fight against militant insurgency “until we succeed, and we will succeed, and I have no doubts about that because we are on the side of truth… and God is with us”.

He also reaffirmed that the international summit to support Egypt’s economic development, poised to be held between 13-15 March, will be held on its pre-determined date, encouraging Egyptians to keep their morale high.

Al-Sisi met in Ethiopia with leaders of Spain, Tunisia, Uganda, Djibouti, South Sudan and Sweden, all of whom expressed their condolences and confirmed their support to Egypt in its fight against terrorism. He decided to cut short his visit to the African summit to return to Cairo after hearing of the explosions in Sinai.

The US administration condemned Friday in a statement the “terrorist attacks in Egypt’s North Sinai”, expressing “sincere condolences to the victims, their families, and the government and people of Egypt”.

The Supreme Council of Armed Forces (SCAF) convened Friday to discuss the latest attacks, and condemned them saying: “The attacks will not deter us from our holy duty to uproot terrorism and destroy it”, according to the armed forces spokesman’s statement.

SCAF said the army operations in Sinai will continue, and it also confirmed their “insistence on continuing the securing of all the state’s efforts to go through with the future map to establish security, stability and push development efforts.”

The formerly ruling Muslim Brotherhood issued a statement Friday to express grief over the victims of the attacks in Sinai. The Brotherhood called on the armed forces to go back to their barracks, stay away from politics, reinstate residents in Sinai and prosecute “all the criminals” as “the only solution” to the current situation.

The officially banned organisation said it was “shocked by the dislodging of residents of Sinai, exterminating whole cities, torching, destruction, killing and shedding Egyptian blood, and the latest of this is the killing of scores of soldiers.”

Egyptian authorities decided in October to establish a buffer zone in the border area in Sinai between Egypt and Gaza Strip. The decision came in the wake of the deadly 24 October attack, for which State of Sinai claimed responsibility as well.

Evacuation of houses in the buffer zone that is supposed to be of 13 kilometres long and almost 6 kilometres width would mean the complete border city of Rafah would cease to exist.

Public interaction on social media networks was widely expressed through an existing hash-tag on Twitter called “We are all the Egyptian Army”, which was highly active over the weekend. While all users mourned the victims, some supported the army and others blamed it for the killings.

The state-affiliated National Council for Human Rights (NCHR) called for international support for Egypt’s war on terrorism. “Terrorism affects all nations and people. Joint international efforts must be implemented,” it said in a Friday press statement condemning the attack.

Political parties reacted to the attack by expressing support for the armed forces. Al-Wafd Party called on citizens to donate blood and provide as much medical assistance as possible to the injured.

In the meantime, North Sinai residents postponed their escalation steps against imposed curfew hours. Leftist Al-Karamah Party urged civil and political groups to stand by the military in its war on terrorism. The party had announced an open strike to start by Monday, along with political and civil forces, in objection to harsh living conditions and curfew hours imposed on North Sinai residents.

Before the attack, North Sinai-based journalist Mostafa Singer had commented in statements to Daily News Egypt by saying that curfew hours were not justifiable since the measure has not helped in achieving stability. “Many of the militants’ operations were conducted during curfew hours anyway, to the inconvenience of only the citizens, who are restricted in moving and cannot even get healthcare assistance in emergency situations due to the curfew,” Singer said.

Meanwhile Al-Dostour Party demanded more transparency and information concerning the situation in Sinai, including updates on the attack and the assessment of the threat of militant groups.

Khalid Okasha, a security analyst, said that losses occurred mainly by the mortar shells that targeted the military camp, rather than the car bombs.

He added that it is in the group’s favour to exaggerate in the numbers of deaths; and that these numbers are not true.

“The group promotes the idea of being ISIS agents in Egypt,” he said, noting that there is no proof so far that any members of ISIS have infiltrated into Egypt to work with former Ansar Beit Al-Maqdis.

The pledge of allegiance though is in favour of ISIS, as it notes that they have affiliates everywhere around the world without actual involvement, Okasha added.

Gold also said that the number of 100 fighters who participated in the operation might be “inflated”. However it suggests that ‘State of Sinai’s organisation of a minimum number of fighters required to target almost 10 checkpoints “suggests a larger organised structure than has been seen before in Sinai.”

He added that ‘State of Sinai’ “was founded as a loose-knit union, almost more of a ‘brand’, for Sinai-based jihadists. This attack, however, suggests these disparate factions are able to work together to a greater extent than has been previously witnessed.”