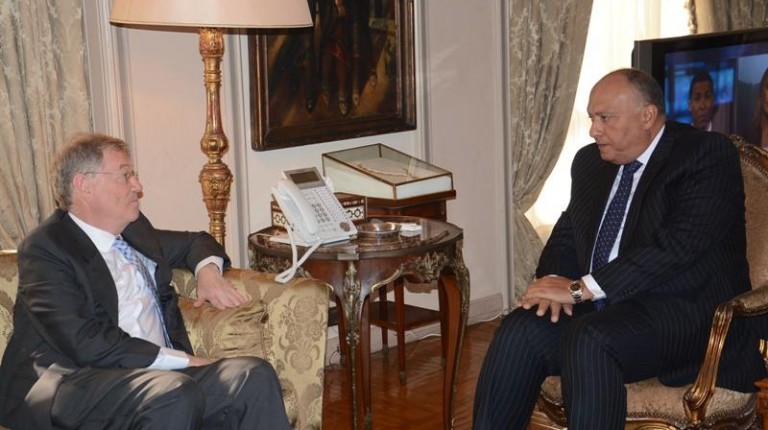 “The meeting tackled the Palestinian issue in light of latest updates including the new West Bank settlements,” said foreign ministry spokesperson Badr Abdelatty. He added that both parties discussed potential ideas to resume the peace talks between Palestine and Israel based on the mutually agreed upon international treaties.

Serry, who is also the UN representative for the Palestinian Liberation Organization (PLO), further discussed with Shoukry the daily lives of Gaza Strip residents. They also discussed possible ways to implement the recommendations previously discussed at the Gaza reconstruction conference.

Monday’s meeting is part of ongoing attempts from the Egyptian government to intermediate between Israel and Palestine. Located at the restive border of Sinai Peninsula, the Gaza Strip’s security situation is equally crucial for Egypt.

The Israeli government published bids for the building of new 450 units in West Bank settlements on Friday, a decision strongly condemned by several international governments including the Egyptian foreign ministry as well as, and the Obama administration.

Earlier this month, President Abdel Fattah Al-Sisi met with the Palestinian Authority President, Mahmoud Abbas, to discuss escalating political tensions between the Palestinians and Israelis. They also discussed the Palestinian unity government’s efforts to reconstruct the Gaza Strip, following the major damage that befell it after the 50-day armed conflict last summer.