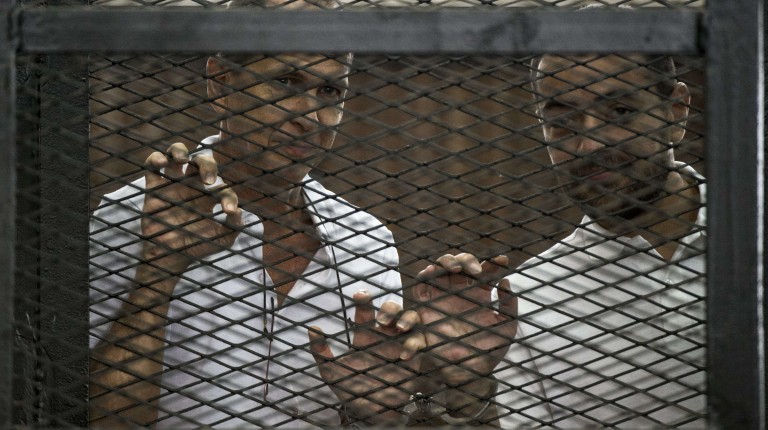 In the wake of February 2015 and after over a year in prison, two out of three Al Jazeera journalists walk free, not because justice has finally been served, but rather as a result of international pressure on Egypt to consider their legal rights guaranteed by their non-Egyptian citizenship.

Australian Peter Greste was released and deported Sunday, and Canadian Mohamed Fahmy is soon to follow. A law passed a month earlier allows ‘foreign’ prisoners to be deported, and does not apply to Egyptians.

“This is unfair for Baher Mohamed,” the third journalist sentenced to the highest prison term among them, according to his wife Jihan Rashed. Fahmy and Greste were sentenced to seven years in prison, while Baher Mohamed was sentenced to an additional three years for being in possession of a spent bullet casing.

“We don’t know on which basis two journalists sentenced in the same case are being celebrated in other countries for their deportation, while my husband has to wait for  trial,” Rashed told Daily News Egypt Tuesday.

Mostafa Nagy, Greste’s and Mohamed’s lawyer, filed a demand Tuesday to the prosecution authorities demanding his release pending trial as he awaits a date to be set for the first session of a retrial.

“The court of appeals accepted our argument that there were legal violations during the case, which means that a new trial will start from scratch,” Nagy told Daily News Egypt Tuesday.

Rashed, a mother of two children aged 3 and 4, said: “The children see their father on TV behind bars, and I keep lying about it saying he is filming something for his job, and when he finishes work he will come home.”

Fahmy, who held a dual citizenship, had to renounce his Egyptian nationality to be deported to Canada on 25 December, according to a decision approved and stamped by the Ministry of Interior, published by the state’s official gazette Tuesday.

“Fahmy is a lucky man for having a way out,” says long time Egyptian human rights activist Aida Seif El-Dawla. “The Egyptian citizenship is just a piece of paper, especially when it does not guarantee your rights and puts you in jail instead.”

“Nationality is not and will not be a privilege accorded by the ministry when it pleases,” she added in comments to Daily News Egypt Tuesday.

The AJ trial received intense media coverage due to the internationally perceived infringement of legal rights. It started when on the night of 29 December, 2013, the police stormed the Marriott Hotel in Zamalek. A long video was broadcast on TV, where Fahmy and Greste were placed under arrest in their hotel room, being questioned by man whose face could not be seen, but seemed to be an authority official.

While a cameraman was freely wandering around the room and shooting every corner, no lawyers were present when the official tried to make a connection between Al Jazeera channel, traveling to Qatar, and possibly passing through Turkey, all of which were subject to severe investigations on suspicion of aiding the banned Muslim Brotherhood organisation.

A large sector of local public opinion has considered the Al Jazeera network as ‘hostile to the country’, particularly in its stance following the 2013 ouster of Mohamed Morsi.

However, the Egyptian media commotion launched against them was not the journalists’ biggest issue, as the journalists were subjected to long detention periods, following by an ‘infamous’ trial. On June 23, 2014 they were sentenced to prison, and the verdict was widely considered ‘unacceptable’ by experts and activists.

“One of the hardest tasks was writing the memorandum of appeals,” recalls Negad El-Boraie, who was part of Fahmy team of defence lawyers. “Mainly because the verdict and the case building up to it were very poor in content,” he continued.

The judge was aware of that, continued El-Boraie, in statements to Daily News Egypt. “All that mattered was to keep the defendants imprisoned, and so the case was established in a way that would require a lot of back and forth in courts,” El-Boraie said. Their appeal was accepted on 1 January.

El-Boraie explained that their current legal situation does not put Greste and Fahmy guilty of any crimes in their home countries any more, and he doubts they will be re-tried after their deportation.

Fahmy’s fiancée Marwa Omara previously told Daily News Egypt in an interview that moving to Canada would not prevent her from teaching her children about Egyptian culture, and even bringing them to meet the rest of their family.

Fahmy explicitly stated that AJ implicated and endangered them by lying about their legal framework in Egypt, especially after authorities had closed down the channel’s offices and banned the Arabic version from broadcasting.

On the other hand, Greste’s first public appearance was in an AJ video Monday evening, in which he expressed wishes for his colleagues to be deported. It remains unknown how the trial will proceed regarding Baher Mohamed.

“It is less likely that he would be released, like over 60 jailed journalists, because this racist deportation law does not apply to them, they are Egyptians,” the Arabic Network for Human Rights Information (ANHRI) said in a statement Monday.