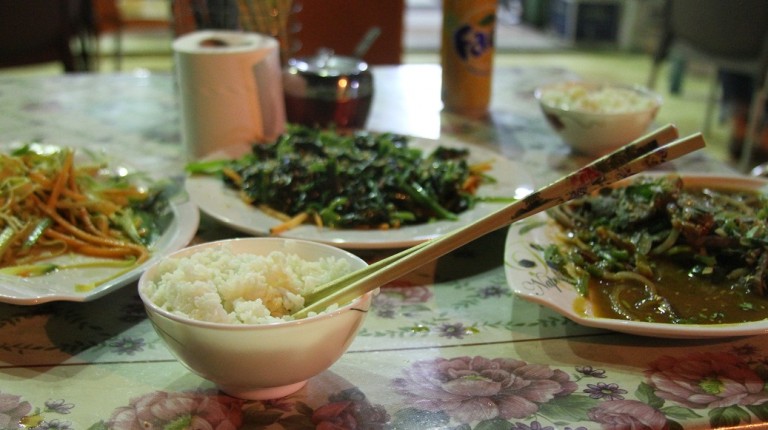 Cairo is a sprawling loud concrete jungle, a metropolis that seriously rivals New York for the title of “the city that never sleeps”. Despite being the largest city in Africa, and home to millions of people, Cairo is sorely lacking in authentic cuisines from around the world.

The capital has no shortage of wholesome dishes – the kind of food that has a quality to leave one in a stupor, which can only be remedied by a glass of tea, or food from the region (anything from Yemeni to Syrian is genuine deliciousness), but in this ever-globalising world, Cairo has missed the mark in diversifying its food portfolio.

The reason for Cairo’s lack of diverse cuisine arises from a lack of diversity in its population. New York has a plethora of authentic dishes from around the world, because New York is home to millions of immigrants.

That Cairo has a growing Chinese community comes as a surprise. From culture to language, and everything in between, Egypt and China seem so polar-opposite. But Cairenes, from the Abbaseya neighbourhood, have welcomed the influx of Chinese residents, along with the delicious cuisine they bring.

Authentic Chinese restaurants, not to be mistaken for Peking and Panda House – popular franchises that miss the mark – are few and far between. In the Abbaseya neighbourhood however, three restaurants can be found close to one another, giving off the illusion of a mini-Chinatown.  To get to these restaurants can be quite an adventure, as they are not out in the open.

One has to take the metro to the El-Geish stop. Upon exiting, ask someone where the Mobil gas station is. Make a right on the street right before the gas station and keep walking. On the right side, you will see storefronts with Chinese font and the aroma of ginger and soy sauce wafting through the air.

One of the restaurants has a small outdoor patio. The signage that hangs over the patio reads “The Chinese Muslim Restaurant” in Arabic and Chinese, with a picture of worshipers circling around the Kaaba. Towards the left, a picture of the Great Wall of China is juxtaposed next to the Great Pyramids of Giza.

Da Wu De, the manager of the restaurant, tells Daily News Egypt that the restaurant has been around for seven years now, and going into its eigth year. Da, like most of the Chinese that live in the area, belongs to the Hui people.

The Hui are ethnically and linguistically similar to the Han Chinese, (the predominant majority in China) with the exception that they are Muslims.

Da, also a Muslim, goes on to say in a blend of Modern Standard Arabic and Egyptian that he’s from the central plain of China, and he’s been living in Cairo for the past 10 years.

At the centre of the table sits a basket of chopsticks. The menu is literally a photo album – each flip of the page reveals a stunning dish. The menu, in classic Chinese fashion, is endless. Everything from dumplings, to noodles, to duck is served – everything but pork of course.

Fluffy steamed white rice is served in tiny bowls. The “Cold Tofu Noodle Salad” is a must have. Thinly sliced carrots and cucumbers interspersed with delicate tofu noodles with hints of ginger make up the cold salad.

The “Morning Glory Salad”, which is more of a vegetable side than salad, steals the show. This classic Chinese dish is simple but packs a punch. Garlic, vinegar, a hint of lime with oil is the base that the morning glory, also known as Chinese spinach, is cooked in. Carrots and small green beans accompany the spinach and all is topped off with sesame seeds.

The “Beef and Pepper” dish, which is stir fried with onions, sliced peppers, sesame seed, ginger, garlic and soy sauce, is more than enough for two people. The fluffy steamed white rice soaks up the sauce making each bite worth savouring.

The dumplings, however, were disappointing. The dough was too heavy and thick. This makes one feel like they are eating a mini sandwich rather than dumpling. The entire flavour is lost in the bread, which is quite bland.

The lights went out in the neighbourhood – a typical occurrence in the capital, but the staff and guests continued with their night unfazed. Lights from cell phones lit up the small patio while guests munched on delicious Chinese food under the glare of Cairo’s fog-choked stars. Conversations are overheard in Mandarin and Arabic. It’s great place to take a date, the food is good, it’s economical, and an adventure to get to.

Despite the dumplings, everything is spot on. It’s also important to note that along with Egyptians, a great deal of Chinese people frequent the restaurant. If a place is serving Chinese food, and Chinese people are dining there, it’s a sure sign that the restaurant is doing something right.