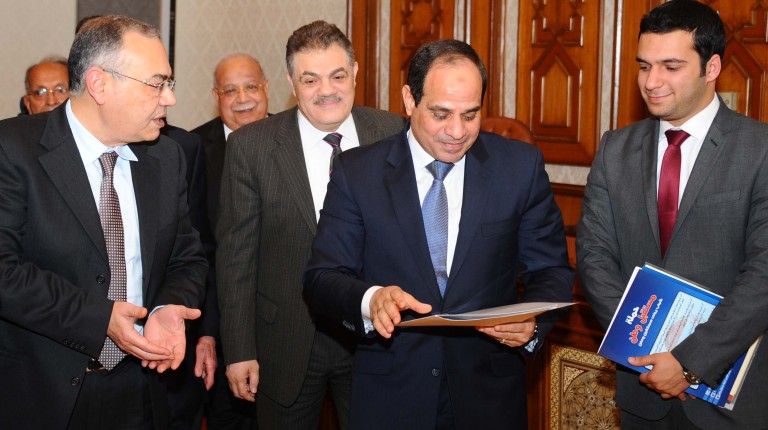 Two major concerns make up the political debate nowadays: the exclusion of the Muslim Brotherhood and the Islamist current in a broader context on the one hand, and on the other hand the fear of return of the same figures of the Mubarak-era regime, namely members of the dissolved National Democratic Party (NDP).

Political parties and independent politicians have spent the past months trying to form alliances through which they hope to win parliamentary seats and gain an advantage over Brotherhood and NDP figures.  These coalitions aim at establishing joint lists of candidates, through which parties endorse each other to avoid scattering votes as much as possible.

Parliamentary seats are divided between 120 seats elected through closed-lists and 420 individual candidates. Electoral coalitions could be created either to form joint lists of candidates, or to coordinate for individual seats.

Alliances formed across political parties, meaning that members of parties that differ ideologically coordinated with a variety of political figures, bringing currents from the extremes of both right and left together, to form “a national coalition”; hence the titles they have given their electoral lists, such as “Egypt’s Renaissance”, “For the love of Egypt,” and “Long Live Egypt”.

According to Farid Zahran, vice-president of the Egyptian Social Democratic Party (ESDP), the trend is problematic. “The lists seem to represent the identity of their leaders rather than common political vision,” Zahran said.

For example, the electoral list named “Egypt’s Renaissance”, which the ESDP is part of, is commonly known as the list of Abdel Geleel Mostafa, who is not personally running for the elections. Mostafa, who holds a PhD in Internal Medicine, is a politician who participated in the following: the 50-member Committee that drafted the constitution, the National Association for Reform founded by Mohamed El-Baradei, co-founding Kefaya, and the 9 March Movement for the Independence of Universities.

However, prior to joining “Egypt’s Renaissance”, the ESDP was discussing potential coordination with Al-Wafd liberal party, chaired by El-Sayed El-Badawi, but the two split over the establishments of the lists, and agreed to maintain coordination on individual seats.

Meanwhile, Kamal El-Ganzoury, twice-former prime minister, under Mubarak’s regime (1996 to 1999) and under the rule of the Supreme Council for Armed Forces (SCAF) following the 25 January Revolution (2011 to 2012) has majorly influenced the political scene in past weeks.

El-Ganzoury announced he was forming a new list of candidates to run for the elections and politicians were racing to be on that list, believing his influence will lead to his endorsment by the state.

On 13 January, President Abdel Fattah Al-Sisi called for a meeting with leaders and representatives of political parties, during which he told politicians that there was no such thing as a group of candidates supported by the government, namely El-Ganzoury’s list which many suspected was backed up by Al-Sisi.

In the meeting, Al-Sisi also told party leaders that if they came together under one coalition, he would consider it a “national coalition” and support it. As a result, El-Badawi arranged meetings with as many political parties as possible to group them all under Al-Wafd’s coalition, to compete against El-Ganzoury.

Competition escalated between El-Ganzoury and Al-Wafd. For example, Mohamed Ghobashy, a former military official and now senior official at a political party named “Guards of the Nation”, accused Ahmed Al-Fadaly, president of the Democratic Peace Party and leader of a coalition named Tayyar El-Istiqlal, of sabotaging El-Badawi’s initiative. Ghobashy claimed that Al-Fadaly was part of the rival El-Ganzoury list, and that such conflicts “killed” Al-Wafd’s ambitions.

El-Ganzoury’s list included Major-General Mourad Mouwafi, former Director of Intelligence (2011 to 2012) and of Military Intelligence (2004 to 2010). It also included former officials such as Abdel Salam El-Mahgoub, a military man who served as minister of Local Development and governor of Alexandria; Ahmed Zaki Badr, former minister of Education (2010 – 2011) and son of a controversial Mubarak-era minister of interior in the 90s; Osama Heikal, former minister of communications; and Mahmoud Badr, the young leader of the Tamarod movement.

On both sides, alliances started to fade away and politicians revised their situation, which restructured the political scene.

Just a couple of days ahead of the first day of candidates’ registration on 8 February, El-Ganzoury’s list was considered dissolved.  Last Wednesday, members who were on the list launched a new group candidates under the name of “For the love of Egypt”, led by Sameh Seif El-Yazal, a former army official who served in both the military and general intelligence services. It included a number of those who were trying to coordinate with El-Ganzoury, like Heikal and Badr, senior members in the Free Egyptians Party (FEP) like Emad Gad, and other politicians and parties.

“Nothing prevents alliances between different political currents, but they have to be based on political principles, such as a common vision of a civil state or democracy for example. In that case, the right and left wings can ally to achieve a desired goal,” says Zahran.

“But if we do not know specifically in which direction they were working, how can we tell if they achieved what they promised or not?” he continued.

Zahran found it hard to predict if the ongoing debates between politicians will reflect inconsistency inside the next parliament, as he doubts the majority will be able to win seats. “All the political parties that have endorsed Abdel Fattah Al-Sisi in the latest presidential elections are trying to present themselves as the president’s political representatives,” said Zahran.

“The problem is Al-Sisi does not want the parties. Some parties are very enthusiastic for the president but it is not mutual,” he added in a Wednesday interview with Daily News Egypt. However, he admitted that that politicians’ ongoing struggle is partly a result of the parliamentary law.

The first parliamentary law issued by Adly Mansour in June 2014 raised a lot of controversy among politicians who objected the new division. The law gave the majority of seats to individual candidates, and the rest to be through a closed-list system.

“The ‘individual system’ law suggests the state’s pre-desired outcome of the parliament by drawing the scene in a particular matter, because the system pushes voters to have personal standards and relations for favouring one person over another,” Zahran concluded.