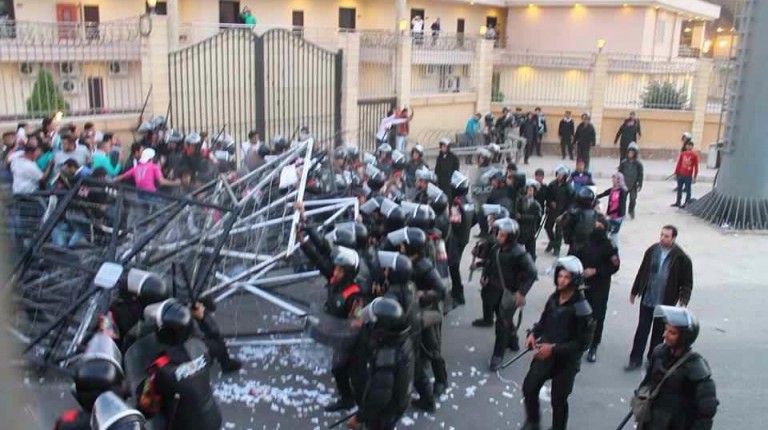 At least 22 football fans were killed Sunday after police attempted to disperse fans whilst entering the Air Force Stadium in Cairo.

State TV announced Sunday that 22 were found dead in the events that preceded the match, while hardcore Zamalek fan group the Ultras White Knights said 28 were killed.

UWK described the violence against Zamalek fans as a “deliberate massacre”, claiming the special security measures were prepared only one day before the match, and had never been used in football stadiums inside or outside Egypt.

The fans were entering the stadium to watch the game between Zamalek and Enppi teams.

The match was supposed to mark the first week of football fans’ return to the stadiums after a ban on attending all domestic matches was implemented following the death of 74 supporters of Al-Ahly club in February 2012 in the match with Al-Masry.

Authorities announced before the match that only 10,000 fans will be allowed. However, only 5,000 tickets were available for sale, and the rest were set to be invites distributed by the club to its subscribing members.

Media reports said Zamalek president Mortada Mansour decided on Thursday to turn all the tickets to invites, although there were eventually tickets available for sale to the fans before the match.

A narrow metal tunnel was put inside the gates in order to reduce the numbers of fans entering at once. Security forces used tear gas and birdshots to disperse the crowding fans in the tunnel, according to videos, pictures and testimonies circulated on social media.

Crowds of fans tried to escape and the stumbling resulted in scores of injuries and deaths.

The Ministry of Interior said that “large numbers of ticketless fans tried to storm the stadium, which caused security forces to prevent them from damaging the stadium facilities,” according to their official statement.

The two teams in the stadium nonetheless played the match, after it was delayed for approximately 40 minutes, with sources among Zamalek supporters confirming that the players knew about the deaths as they tried to stop the players’ bus as it entered the stadium following the violence.

One Zamalek player, Omar Gaber, decided not to play the match upon hearing the news. As a result, Mansour suspended the player.

Following the dispersal of fans, numbers of them rallied outside the stadium and set a police car ablaze in protest of the violence against them.

Egypt’s football federation announced the suspension of the domestic league following the match until further notice.