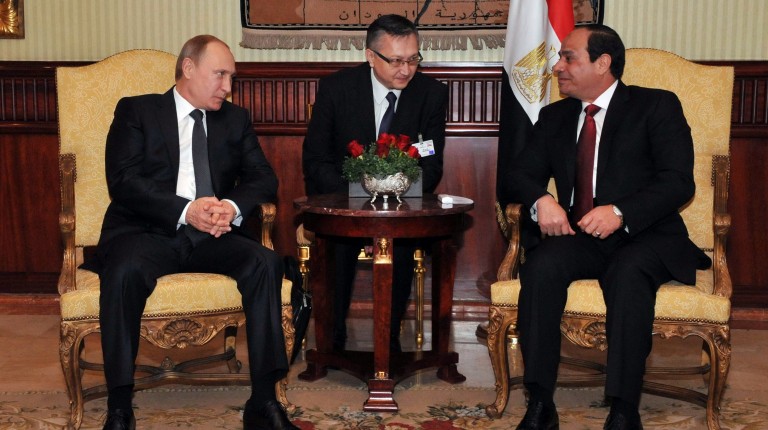 Economic cooperation formed the core of talks between Egypt and Russia, it was announced at a press conference held in Cairo Tuesday.

Russian President Vladimir Putin announced the agreement between Egypt and Russia on cooperation to establish a nuclear power station. The joint project includes the construction of a station, personnel training and provision of equipment to generate electricity.

“We agreed on extensive cooperation in the field of agricultural products and nuclear energy in addition to expanding the potentials of small- and medium-scaled business,” Putin added.

Putin added that there are currently over 400 Russian companies operating in Egypt for investment purposes.

The Russian president further said the two countries seek to cooperate in the field of infrastructure, automotives and chemical industries, besides strengthening tourism, educational and scientific exchanges.

“I agreed with [the Russian stance] on establishing a Russian industrial zone in northern Ataka on the axis of the Suez Canal,” said Al-Sisi.

He added that bilateral agreements between Egypt and Russia have been signed in the fields of energy, investment and gas. In addition to this, a Memorandum of Understanding has been signed to establish the Dabaa nuclear power station.

The presidents said they took part in constructive negotiations, discussing regional and international issues the two countries are concerned with.

“We have put high priority on the Syrian crisis,” Putin said.

“I agreed with the Russian president that it is necessary to provide a safer international regime,” said Al-Sisi, adding, “Putin’s visit confirms Russia’s support of Egypt in its war against terrorism.”

Putin said that he agreed with the Egyptian president on intensifying efforts to combat terrorism.

“Egypt is enhancing its relations with the with countries that supported it in the 25 January 2011 as well as 30 June 2013 revolutions,” Al-Sisi stated

Russia will always be a trusted and secure partner to Egypt, Putin concluded.