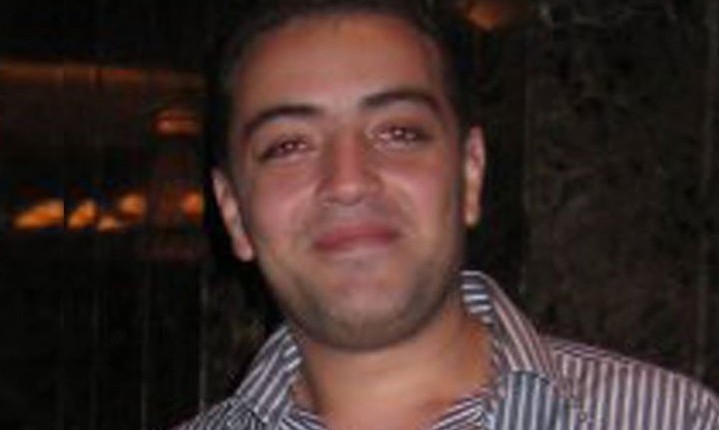 Baher Mohamed is the 30-year-old Al Jazeera journalist whose Egyptian citizenship prevented him an equal chance for freedom like his co-defendants Mohamed Fahmy and Peter Greste. The media has rarely highlighted Mohamed’s case, but the journalist is now speaking of the increasingly unfair situation. Daily News Egypt visited Mohamed’s house and spoke to his wife Jihan Rashed, who gave a tour of her house and introduced us to Gatsby, her Caucasian dog which the police shot.

Rashed, now a mother of three after giving birth to a baby boy, Haroun, while his father was behind bars, said she believed in her husband’s innocence and  felt sorry that one of their legal options was to seek a new nationality, not an Egyptian one.

Tell us about the night of the arrest?

It was the night of 30 December 2013.  They came around 3 in the morning. We were asleep and the children as well. We were not expecting them at all. We heard hysterical knocks on the doors of the building and the sounds of them breaking. The dog was barking very loudly. I told Mohamed to get up and check, but his first response was ‘it’s probably nothing’ maybe some workers, because the neighbourhood has many buildings under construction. I told no, the dog is barking.

We got up and saw the police had jumped over the house’s fence, broken the doors. They stormed Mohamed’s mother’s apartment right below us. The entire family woke up because of the dog. They fired two shots at the dog. We were afraid, and were trying to protect the children. Mohamed started telling them from behind the doors: “Do not break it, do not do anything, we will open the doors for you.”

They did not listen and raided the house. More than 50 policemen with their firearms were standing in my flat. I was terrified and speechless. They turned our bedroom upside down. They were throwing drawers everywhere regardless of whom it could hit or what it could break. My daughter was sleeping in my bed. A police officer told me to carry her out because he was going to remove the mattress. He was serious, and as soon as I grabbed her he violently removed it.

Mohamed was being questioned and all our personal belongings searched. They also seized a number of our stuff such as cameras, including a brand new one in a sealed box, watches, laptops, telephones, silver key chains. One of the officers thought we did not see him when he slipped an envelope that contained EGP 16,000 in his clothes.

I am not sure, they were high rank officers, looked like those National Security men. They were giving me orders to stay away. I remained speechless. My daughter was crying but I tried to reassure her. My son was asleep.

How long did they stay and what happened after?

That situation lasted for about an hour, an hour and a half. They blindfolded him and took him in their car. They took Mohamed with them and refused to tell us where they were taking him. They told us that Mohamed would call us once he appears before prosecution authorities.

We kept waiting for that call. It took us two days to reach him by phone. “I am cold. Please bring me warm clothes,” he told me. His family was able to bring him some stuff at the Qasr Al-Nil prosecution.

Where did he go after that?

Mohamed remained in the same place of detention for 15 days pending investigations. He described the cell as narrow in comparison to the people in it, with no bathroom facilities, and no options of getting out of it to use a bathroom. Then, Mohamed was transferred to Al-Aqrab prison. He told us that when he complained of the inhumane conditions he was being detained in, they decided to put him in solitary confinement without food or clothes access. They had also stripped him of his clothes and gave him a blanket. “Too many insects,” he complained. He said he did not know whether to use the blanket to cover himself up from the cold or put it on the floor to sleep on it.

Mohamed was thinking loudly when he heard voices around him. “Do not worry,” they told him. “Uou will find a carton sheet next to you, use it as an isolation system from the floor’s cold and humidity and cover yourself with the blanket.” He realised that his cellmates had known about his arrival and were trying to tell him he was not alone.

When did you fist see him?

I saw him right after the first 45 days in prison where visits are not permitted. He was very sick because of the cold but his cellmates had been able to provide him with some clothes. I used to visit him every week but the treatment we received was disrespectful and careless. Sometimes we would sit from 8 in the morning to 5 in the afternoon only to be eventually informed that we were not going to see him that day. They would tell us excuses like “Today he had to go for interrogations.” We would ask them to allow him some of the food we brought him, they would keep us waiting and their answer was not always ‘yes.’ I was pregnant with my child. Imagine what we had to endure and what they had to see.

How was it after the verdict in June?

He was then taken to Tora. I remember in one of my visits I noticed he has some skin spots that looked unusual. Mohamed told me maybe it was because he was never exposed to sunlight. So I asked him what about the break hour where you are supposed to go out? He told me they let them only get out of their cell but never saw the light beyond that prison corridor. “It has been a year now I have neither seen day or light,” he said. This is why he always insisted that I visited more often so he can get out. Sometimes it was very tragic for us. The kids would keep banging the walls telling him “come out we want to play with you.”

So the children visited him in prison. What do they know?

They do not know the real situation. They know that their father is inside because he is working and filming something. When he finishes he will come back. However, when they see him behind bars on TV they understand that this means “imprisoned” and they ask why but I keep telling them he is not. Sometimes they relate it to a cage for animals so I let them believe he is doing some sort of work.

How did you meet?

I met him through a school friend who introduced us. We have been married for five years now, we have a four-year-old boy, a three-year-old girl, and a baby boy who is just five months old, born when Mohamed was away.

Why did Mohamed get 10 years?

Well, he was sentenced to seven years in prison like Mohamed Fahmy and Peter Greste, with an additional three years for the possession of an empty bullet. Let alone the illegal seizure of the bullet from his house, it was nothing more than a souvenir he got from the days he worked in Libya. The bullet cannot even be used in any weapon! It has a specific arm that fits it.

How did things change after the ‘nationality’ issue which allowed Mohamed’s co-defendants a way out of the case?

Everybody started talking about this to the extent that we forget the case’s charges. Even in the media, it has become an issue of nationality. It affected me. I honestly started looking for a new nationality for us so we can give up our Egyptian one and get him out, if others are doing it. The problem is when they accepted to release Greste and Fahmy, it means that they are not considering them guilty of anything, so why should my husband be held accountable? It does not matter if he is innocent or not, he can get out if he is not Egyptian. I am a mother and he is a father, we need him to get out especially that he did not do anything wrong. He has been detained for a year between four walls, deprived from his basic rights to proper food and clothing, deprived from his family. Do you really think all that matters in front of his Egyptian citizenship? I have never seen a man like my husband so proud of his Egyptian nationality. Mohamed refuses to give up his nationality, while others started hunger strikes and almost gave up on their lives for freedom. I don’t understand how people can blame me for thinking about that.

What will you tell the children?

Actually I want to ask you and other journalists that question. You people who always speak of freedom of expression, tell me what should I tell them about the country that jailed their respectful Egyptian father because he is a journalist? Should I teach them to respect the flag in school? Should I teach my children to respect the country when their father is wrongfully detained? Ask any Egyptian citizen today if they want to get out of this country or not.

When did Mohamed start working in Al Jazeera?

Six months before his arrest.

Did he feel positive about the job when he first got the offer?

Mohamed is a journalist and he aimed to expand his career as any ambitious person doing that job. He holds no political affiliations and is not biased towards any particular group. He reports things as they are. It’s a matter of principles not what channel it is, Mohamed was doing his job from an ethical point of view regardless of anything else: reporting the truth.

Did you know what kind of risk you were taking by marrying a journalist?

I did not but I always worried about him. Even before that year in prison, I have almost never seen him for another year due to his job. He was always out there covering something and I would be watching news about clashes knowing he was there only to report the incidents.

What did you think of media coverage of the AJ case?

Well if you noticed, local media went from calling them ‘terrorists’ to ‘journalists’ and now it’s all about ‘the Egyptian citizen’. No Egyptian local media reached to us. Only recently, two famous TV hosts supported him. Why didn’t the Egyptian journalists support their fellow Egyptian colleague, without any bias, just pure reporting on the case?

Who else supported you?

The Press Syndicate supported us and defended him but only after the citizenship issue. Al Jazeera sent us a lawyer and are in contact with us.

What are your hopes?

We will plead not guilty and ask for a temporary release in the retrial. We hope his name gets cleared. We hope he comes home without having to consider the citizenship issue. I hope journalists will support his release through rallies and pressure.

What has the experience taught you?

Well I have been playing the role of both parents now so I learned a lot about being strong and responsible but I will say this on behalf of Mohamed: as long as you are right do not fear anything.