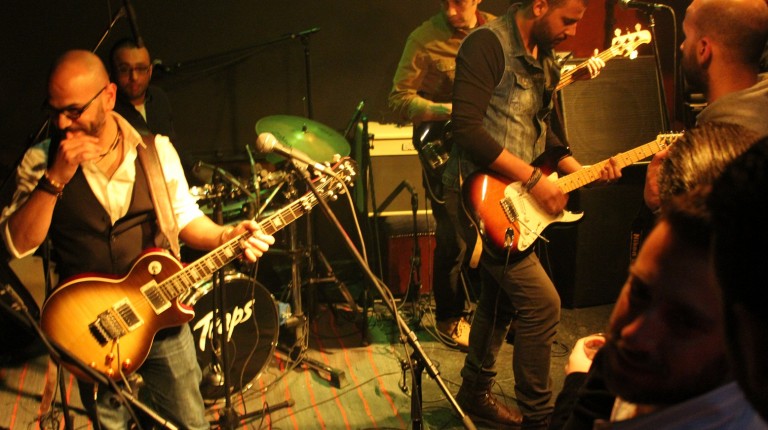 When Massar Egbari took the stage at Cairo Jazz Club (CJC), it was amongst friends and close acquaintances. The band, which many agree is the most popular indie group in Egypt, held a guest-list only album launch party.

The mood before the band hit the stage was relaxed. Friendly banter over drinks amongst friends and supporters of the band are heard everywhere.

As the venue started to fill up, almost reaching its capacity, Massar Egbari hit the stage. Drummer Tamer Attallah is smoking a Sherlock Holmes pipe, while keyboardist Ayman Massoud takes his seat, his hands over the keys. Ahmed Hafez, the bass guitarist, and Mahmoud Siam, who plays electric guitar, sling their instruments around their shoulders and begin playing simple cords. The crowd is anticipatory, patiently awaiting the arrival of lead singer and guitarist Hani El-Dakkak.

The Alexandria based band, founded in 2005, is releasing their latest studio album titled “Toqaa’ w Teqom”, translating as “To Fall and Stand Up”.

This special night, along with friends, was also reserved for popular musicians in Egypt to join in the celebration. The list of artist and celebrities included bands Wust El Balad and Cairokee, as well as actress Yosra El-Lozy.

When El-Dakkak takes the stage, he starts by quickly thanking friends for coming out to this special night, saying: “Please everybody, I hope you can see me as I’m very tall”, making a joke about his height as he is relatively quite short. The crowd laughs, breaking the ice, and Masser Egbari beings. It should be noted that Masser Egbari , like true performers, are incredibly relaxed, a reminder to people that they have been performing for almost 10 years.

The set-list included both new songs and some old favorites. Some of the old hits that Masser Egbari played were “Mersal”, a love letter-turned-song, and “Erael Khbar”, a sad tale of a recent graduate who, unable to find work in Egypt, is forced to work abroad as a dishwasher.

“Batooly”, a highly optimistic song, encourages its listeners to “keep fighting, keep smiling”. It opens with heavy guitars and forceful drums to match, which gives the song a kind of anthem feel, colouring the track with a sense of triumph.

The heartfelt track “Sabehek”, in true love song fashion, features El-Dakkak pining over his lover and showering her with compliments. All instruments seamlessly flow together before El-Dakkak’s voice appears “I wish the sun was as bright as your smile”.

What makes Massar Egbari’s  music popular is the skill that each musician is able to play with. Their mastery over their craft enables them to present to audiences a kind of alternative sound which is able to mix elements of jazz, rock, blues and Arabic music.

Their subject matter is also poignant. Along with love, which the band is very much concerned with, their songs also offer a kind of social commentary. Its approach is not preachy, it is not heavy-handed in delivery, but simply tells the tales of struggle.