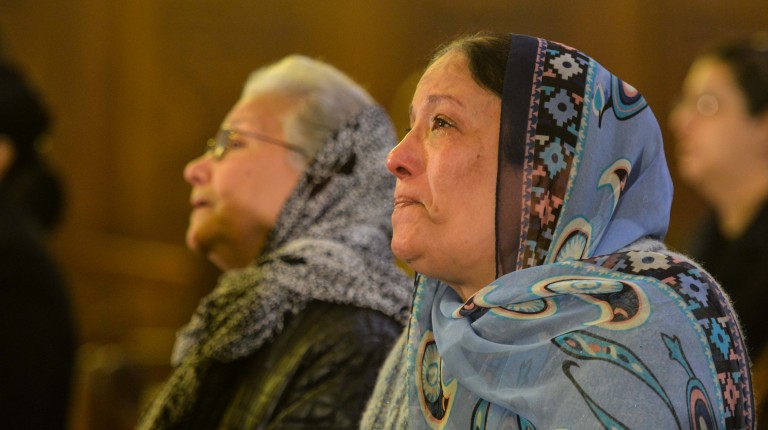 “The government healed our wounds; their reaction was unexpected,” Maher Yousef, brother to a victim of the attacks on the 21 Coptic Christians in Libya, told Daily News Egypt.

Families of the victims were satisfied with the compensations given to them by the government, and the measures taken by the army to “retaliate against Islamic State”.

On Monday morning, the Egyptian army announced it had launched eight airstrikes so far on specific targets, including camps and ammunition stores belonging to “Islamic State” in Libya.

The coalition also called on the two parties to communicate with the captors to ensure the safety of the kidnapped. However, no action was taken until a video was released showing the beheading of 21 Egyptian Coptic Christians at the hands of the “Islamic State” (IS) in Libya Sunday.

Prime Minister Ibrahim Mehleb announced in an official statement Monday that the victims’ families will be granted “martyr privileges”. The Ministry of Social Solidarity is to disburse EGP 100,000, as well as pensions for the families of each of the Copts killed. Mehleb also announced that a church will be built in Al-Minya, in honour of the victims.

Maher was relatively accepting and appreciative of the government’s reaction towards the incident. Malak Shokry, another victim’s brother, echoed Maher’s comment saying: “The reaction of the government made us feel that the blood of Egyptians is not cheap.”

However, Fady Yousef, head of Egypt’s Copts Coalition, criticised the Foreign Ministry regarding their carelessness and their “late approach”.

“The army did its job well, but the foreign ministry holds full responsibility for their negligence,” Yousef said, adding that the government’s compensation will be enough for the families’ material needs. He said, however, it “will not compensate their humanitarian needs”, adding: “We paid the price for the Foreign Ministry’s carelessness.”

The Maspero Youth Union, along with other Coptic movements, also planned to hold a public funeral for the victims in Shubra Tuesday. The move comes after the Union released a statement on their official Facebook page saying the victims were “killed due to their religious background” and the “weakness of the state” which has “only been issuing statements”. The funeral however was cancelled by the police, warning anyone of being present in the area.

According to the statement, the victims were kidnapped for over 45 days and their families had continuously pleaded with the presidency, along with the cabinet, the government, and the parties to take action. The statement said that, despite this, “they chose silence and mere sympathy instead of taking action”. The statement demanded the return of their bodies for them to be honoured by the people of Egypt and warned of the “repetition of the situation” with other Egyptians still in Libya.

Mina Ibrahim, a 23-year-old Master’s student at the Central University of Europe, said: “Thinking that airstrikes on IS will put an end to the situation is just like thinking that killing members of the Muslim brotherhood in Rabaa [Al-Adaweya] will solve the problem.”

He shed light on the contradictions that take place in politics: “[The armed forces] attack the Copts in Maspero, and then rescue them in Libya to look like the saviour.”

Coptic Orthodox Pope Tawadros II headed a mass Tuesday at the St Mark Coptic Orthodox Cathedral in tribute to the memory of the victims. During the mass, the Pope thanked Al-Sisi for his efforts towards the crisis.

“The armed forces responded quickly to the crime for the people to feel that the army and the police are the shield of the country,” he added. A statement released by the Coptic Orthodox Church on Monday said that the Pope tasked a number of bishops to hold masses for a period of three days, starting Monday, at the birthplaces of the victims.